From Infogalactic: the planetary knowledge core
(Redirected from Occultism)
Jump to: navigation, search
For other uses, see Occult (disambiguation).

The occult (from the Latin word occultus "clandestine, hidden, secret") is "knowledge of the hidden".[1] In common English usage, occult refers to "knowledge of the paranormal", as opposed to "knowledge of the measurable",[2] usually referred to as science. The term is sometimes taken to mean knowledge that "is meant only for certain people" or that "must be kept hidden", but for most practicing occultists it is simply the study of a deeper spiritual reality that extends beyond pure reason and the physical sciences.[3] The terms esoteric and arcane can also be used to describe the occult,[4][5] in addition to their meanings unrelated to the supernatural.

It also describes a number of magical organizations or orders, the teachings and practices taught by them, and to a large body of current and historical literature and spiritual philosophy related to this subject. 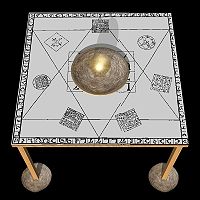 Reconstruction of the "Holy Table" as used by John Dee.

Occultism is the study of occult practices, including (but not limited to) magic, alchemy, extra-sensory perception, astrology, spiritualism, religion, and divination. Interpretation of occultism and its concepts can be found in the belief structures of philosophies and religions such as Chaos magic, Gnosticism, Hermeticism, Theosophy, Wicca, Thelema and modern paganism.[6] A broad definition is offered by Nicholas Goodrick-Clarke:

OCCULTISM has its basis in a religious way of thinking, the roots of which stretch back into antiquity and which may be described as the Western esoteric tradition. Its principal ingredients have been identified as Gnosticism, the Hermetic treatises on alchemy and magic, Neo-Platonism, and the Kabbalah, all originating in the eastern Mediterranean area during the first few centuries AD.[7]

From the 15th to 17th century, these ideas that are alternatively described as Western esotericism, which had a revival from about 1770 onwards, due to a renewed desire for mystery, an interest in the Middle Ages and a romantic "reaction to the rationalist Enlightenment".[8] Alchemy was common among important seventeenth-century scientists, such as Isaac Newton,[9] and Gottfried Leibniz.[10] Newton was even accused of introducing occult agencies into natural science when he postulated gravity as a force capable of acting over vast distances.[11] "By the eighteenth century these unorthodox religious and philosophical concerns were well-defined as 'occult', inasmuch as they lay on the outermost fringe of accepted forms of knowledge and discourse".[8] They were, however, preserved by antiquarians and mystics.

Based on his research into the modern German occult revival (1890–1910), Goodrick-Clarke puts forward a thesis on the driving force behind occultism. Behind its many varied forms apparently lies a uniform function, "a strong desire to reconcile the findings of modern natural science with a religious view that could restore man to a position of centrality and dignity in the universe".[12] Since that time many authors have emphasized a syncretic approach by drawing parallels between different disciplines.[13]

Science and the occult

To the occultist, occultism is conceived of as the study of the inner nature of things, as opposed to the outer characteristics that are studied by science. The German philosopher Arthur Schopenhauer designates this "inner nature" with the term Will, and suggests that science and mathematics are unable to penetrate beyond the relationship between one thing and another in order to explain the "inner nature" of the thing itself, independent of any external causal relationships with other "things".[14][original research?] Schopenhauer also points towards this inherently relativistic nature of mathematics and conventional science in his formulation of the "World as Will". By defining a thing solely in terms of its external relationships or effects we only find its external or explicit nature. Occultism, on the other hand, is concerned with the nature of the "thing-in-itself". This is often accomplished through direct perceptual awareness, known as mysticism.

From the scientific perspective, occultism is regarded as unscientific as it does not make use of the standard scientific method to obtain facts.

Occult qualities are properties that have no known rational explanation; in the Middle Ages, for example, magnetism was considered an occult quality.[15] Newton's contemporaries severely criticized his theory that gravity was effected through "action at a distance", as occult.[16]

Religion and the occult

Some religions and sects enthusiastically embrace occultism as an integral esoteric aspect of mystical religious experience. This attitude is common within Wicca and many other modern pagan religions. Some other religious denominations disapprove of occultism in most or all forms. They may view the occult as being anything supernatural or paranormal which is not achieved by or through God (as defined by those religious denominations), and is therefore the work of an opposing and malevolent entity. The word has negative connotations for many people, and while certain practices considered by some to be "occult" are also found within mainstream religions, in this context the term "occult" is rarely used and is sometimes substituted with "esoteric".

Christian authorities have generally regarded occultism as heretical whenever they met this: from early Christian times, in the form of gnosticism, to late Renaissance times, in the form of various occult philosophies.[17] Though there is a Christian occult tradition that goes back at least to Renaissance times, when Marsilio Ficino developed a Christian Hermeticism and Pico della Mirandola developed a Christian form of Kabbalism,[18] mainstream Christianity has always resisted occult influences, which are:[19]