From Infogalactic: the planetary knowledge core
Jump to: navigation, search
For other uses, see Octave (disambiguation). 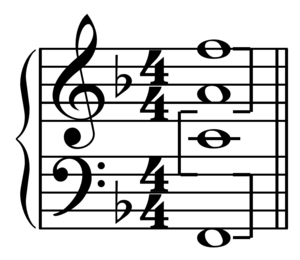 In music, an octave (Latin: octavus: eighth) or perfect octave is the interval between one musical pitch and another with half or double its frequency. It is defined by ANSI[1] as the unit of frequency level when the base of the logarithm is two. The octave relationship is a natural phenomenon that has been referred to as the "basic miracle of music", the use of which is "common in most musical systems".[2]

The most important musical scales are typically written using eight notes, and the interval between the first and last notes is an octave. For example, the C Major scale is typically written C D E F G A B C, the initial and final Cs being an octave apart. Two notes separated by an octave have the same letter name and are of the same pitch class.

Three commonly cited examples of melodies featuring the perfect octave as their opening interval are "Singin' in the Rain", "Somewhere Over the Rainbow", and "Stranger on the Shore".[citation needed]

The interval between the first and second harmonics of the harmonic series is an octave.

The octave has occasionally been referred to as a diapason.[3]

To emphasize that it is one of the perfect intervals (including unison, perfect fourth, and perfect fifth), the octave is designated P8. The octave above or below an indicated note is sometimes abbreviated 8a or 8va (= Italian all'ottava), 8va bassa (= Italian all'ottava bassa, sometimes also 8vb), or simply 8 for the octave in the direction indicated by placing this mark above or below the staff.

An example of an octave, from G4 to G5

After the unison, the octave is the simplest interval in music. The human ear tends to hear both notes as being essentially "the same", due to closely related harmonics. Notes separated by an octave "ring" together, adding a pleasing sound to music. For this reason, notes an octave apart are given the same note name in the Western system of music notation—the name of a note an octave above A is also A. This is called octave equivalency, the assumption that pitches one or more octaves apart are musically equivalent in many ways, leading to the convention "that scales are uniquely defined by specifying the intervals within an octave".[4] The conceptualization of pitch as having two dimensions, pitch height (absolute frequency) and pitch class (relative position within the octave), inherently include octave circularity.[4] Thus all C♯s, or all 1s (if C = 0), in any octave are part of the same pitch class.

Octave equivalency is a part of most "advanced musical cultures", but is far from universal in "primitive" and early music.[5][6] The languages in which the oldest extant written documents on tuning are written, Sumerian and Akkadian, have no known word for "octave". However, it is believed that a set of cuneiform tablets that collectively describe the tuning of a nine-stringed instrument, believed to be a Babylonian lyre, describe tunings for seven of the strings, with indications to tune the remaining two strings an octave from two of the seven tuned strings.[7] Leon Crickmore recently proposed that "The octave may not have been thought of as a unit in its own right, but rather by analogy like the first day of a new seven-day week".[8]

Monkeys experience octave equivalency, and its biological basis apparently is an octave mapping of neurons in the auditory thalamus of the mammalian brain.[9] Studies have also shown the perception of octave equivalence in rats (Blackwell & Schlosberg, 1943), human infants (Demany & Armand, 1984),[10] and musicians (Allen, 1967) but not starlings (Cynx, 1993), 4-9 year old children (Sergeant, 1983), or nonmusicians (Allen, 1967).[4]

While octaves commonly refer to the perfect octave (P8), the interval of an octave in music theory encompasses chromatic alterations within the pitch class, meaning that G♮ to G♯ (13 semitones higher) is an Augmented octave (A8), and G♮ to G♭ (11 semitones higher) is a diminished octave (d8). The use of such intervals is rare, as there is frequently a preferable enharmonically equivalent notation available, but these categories of octaves must be acknowledged in any full understanding of the role and meaning of octaves more generally in music.

Octaves are identified with various naming systems. Among the most common are the Scientific, Helmholtz, Organ Pipe, Midi, and Midi Note systems.

An example of the same two notes expressed regularly, in an 8va bracket, and in a 15ma bracket

Six octaves on a monochord

In writing, a specific octave is often indicated through the addition of a number after the note letter name. Thus middle C is "C4", because of the note's position as the fourth C key on a standard 88-key piano keyboard, while the C above is "C5", in a system known as scientific pitch notation.

The notation 8a or 8va is sometimes seen in sheet music, meaning "play this an octave higher than written" (all' ottava: "at the octave" or all' 8va). 8a or 8va stands for ottava, the Italian word for octave (or "eighth"); the octave above may be specified as ottava alta or ottava sopra). Sometimes 8va is used to tell the musician to play a passage an octave lower (when placed under rather than over the staff), though the similar notation 8vb (ottava bassa or ottava sotta) is also used. Similarly, 15ma (quindicesima) means "play two octaves higher than written" and 15mb (quindicesima bassa) means "play two octaves lower than written." The abbreviations col 8, coll' 8, and c. 8va stand for coll'ottava, meaning "play the notes in the passage together with the notes in the notated octaves". Any of these directions can be cancelled with the word loco, but often a dashed line or bracket indicates the extent of the music affected.[11][verification needed]

For music-theoretical purposes (not on sheet music), octave can be abbreviated as P8 (which is an abbreviation for Perfect Eighth, the interval between 12 semitones or an octave).

In music theory, the first octave, also called the contra octave, ranges from C1, or about 32.7 Hz, to C2, about 65.4 Hz, in equal temperament using A440 tuning. This is the lowest complete octave of most pianos (excepting the Bösendorfer Imperial Grand). The lowest notes of instruments such as double bass, electric bass, extended-range bass clarinet, contrabass clarinet, bassoon, contrabassoon, tuba and sousaphone are part of the first octave.

The ability of vocalists to sing competently in the first octave is rare, even for males. A singer who can reach notes in this range is known as a basso profondo, Italian for "deep bass". A Russian bass can also sing in this range, and the fundamental pitches sung by Tibetan monks and the throat singers of Siberia and Mongolia are in this range.