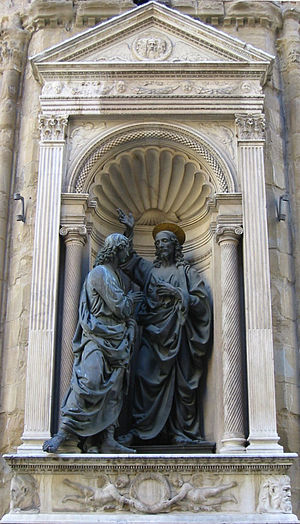 Andrea del Verrocchio's sculpture of the incredulity of St. Thomas.

The term Octave of Easter may refer either to the eight-day period (Octave) from Easter Sunday until the Sunday following Easter, inclusive; or it may refer only to that Sunday after Easter, the Octave Day of Easter (often known as Low Sunday, particularly in the Anglican Communion). That Sunday is also known historically as St. Thomas Sunday (especially among Eastern Christians), Quasimodo Sunday and Quasimodogeniti. Since 1970 Low Sunday has been officially known as the Second Sunday of Easter (referring to the Easter season) in the Roman Catholic Church. On 30 April 2000, it was also designated as Divine Mercy Sunday by Pope John Paul II.

The Octave of a feast refers to an eight-day festal period commencing with that feast. Presently in the Roman Catholic Church, Easter is one of only two solemnities that carries an octave, the second being Christmas Day, although until recently many feasts had octaves.

The name Quasimodo came from the Latin text of the traditional Introit for this day, which begins "Quasi modo geniti infantes..." from 1 Peter 2:2,[1] roughly translated as "As newborn babes, desire the rational milk without guile...".[1Pt 2:2] Literally, quasi modo means "as if in [this] manner".

Incipit of the Gregorian chant introit from the Liber Usualis for the Octave Sunday of Easter, from which it is called "Quasimodo Sunday."

On the Octave Day of Easter, called Saint Thomas Sunday in the East, the Gospel reading is always John 20:19-29, relating the appearance of Christ to his disciples, with Thomas the Apostle present, on the Sunday following his resurrection. A traditional name in English is Low Sunday, perhaps given this name because of the contrast with the high festival of Easter on the preceding Sunday,[2] or the word "Low" may be a corruption of Latin Laudes, the first word of a sequence in use in the Sarum Rite.[3] Another name is Quasimodo Sunday, from the first words of the introit in Latin.[4]

Easter Week was known as ebdomada alba (white week) or in albis (in white), because of the white robes that those who had been baptized at the Easter Vigil used at the celebrations each day until Saturday.[5] The pre-Tridentine edition of the Roman Missal, published in 1474, called Saturday in albis, short for in albis depositis or in albis deponendis (of removal of the white garments), a name that was kept in the Tridentine versions of the Missal for that Saturday. In the 1604 edition of the Tridentine Missal, but not in the original 1570 edition, the description in albis was applied also to the following Sunday, the octave day of Easter.[6]

The name in albis was dropped in the 1969 revision of the Roman Missal, which called this Sunday the Second Sunday of Easter. In the third edition of this Missal, promulgated in 2000 but published only in 2002, the Sunday took what is now its official name: "Second Sunday of Easter or of Divine Mercy".

In Anglican/Episcopal churches, the Second Sunday of Easter is widely known as "Low Sunday," both because rituals are lower than they were the week before, on Easter Day, and because church attendance is usually a fraction of what it was on the feast day. Interestingly, even the Churchman's Ordo Kalendar, which contains all saints' and holy days, refers to it as "Low Sunday." 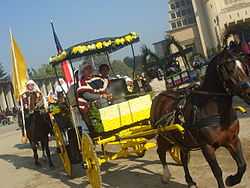 In Chile, mainly in Santiago Metropolitan Region, on Quasimodo Sunday is celebrated the Cuasimodo Feast. Huasos in adorned carriages or bicycles accompany the priest to give communion to the infirm.

Antipascha is the name given to the eighth day of Pascha (Easter) in the Eastern Orthodox, Coptic Orthodox[citation needed] and certain Eastern Catholic churches.

According to the Synaxarium, "On this Sunday, the second Sunday of Pascha, we celebrate the Antipascha, that is to say the re-dedication of the Resurrection of Christ, and also commemorate the event of the Holy Apostle Thomas' touching the wounds of Christ."[9]

Thomas Sunday and Renewal Sunday are other names by which this Sunday is known. The former name refers to the event commemorated that day, described in the Gospel passage read that day at the Divine Liturgy, (John 20:19-31), which recounts the story of Christ appearing to the Apostle Thomas in order to dispel the latter's doubt about the Resurrection.[10] Among Eastern Christians Thomas is not so much remembered as "doubting Thomas," but is rather remembered for his confession of faith: "My Lord and my God," thus being the first to publicly proclaim the two natures of Christ: human and divine. The latter name reflects that on that day the celebration of the Resurrection is repeated and renewed.

The entire week from Pascha to Thomas Sunday, known as Bright Week, is considered to be one continuous day.

He [sc. archdeacon Claude Frollo, Quasimodo's adoptive father] baptized his adopted child and called him Quasimodo; whether it was that he chose thereby to commemorate the day when he had found him, or that he meant to mark by that name how incomplete and imperfectly molded the poor little creature was. Indeed, Quasimodo, one-eyed, hunchbacked, and bow-legged, could hardly be considered as anything more than an almost.[11]