The "Ode of Remembrance" is an ode taken from Laurence Binyon's poem, "For the Fallen", which was first published in The Times in September 1914. 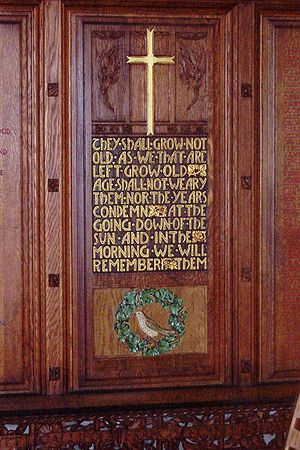 GWGC headstone with adapted excerpt from 'For The Fallen' 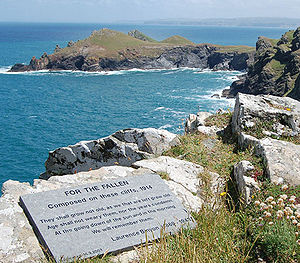 'For The Fallen' plaque with The Rumps promontory beyond

For the Fallen was specifically composed in honour of the casualties of the British Expeditionary Force, which by then already suffered severely at the Battle of Mons and the Battle of the Marne in the opening phase of the war on the Western Front. Over time, the third and fourth stanzas of the poem (usually nowadays just the fourth)[1] have been claimed as a tribute to all casualties of war, regardless of state, and it is this selection of For the Fallen to which the term "Ode of Remembrance" usually refers.

Laurence Binyon wrote For the Fallen, which has seven stanzas, while sitting on the cliffs between Pentire Point and The Rumps in north Cornwall, UK. A stone plaque was erected at the spot in 2001 to commemorate the fact. The plaque bears the inscription:

For the Fallen
Composed on these cliffs 1914

There is also a plaque on the beehive monument on the East Cliff above Portreath in central North Cornwall which cites that as the place where Binyon composed the poem.

A quotation appears on the Calgary Soldiers' Memorial.

A plaque on a statue dedicated to the fallen in La Valletta, Malta, is also inscribed with these words.

They went with songs to the battle, they were young.
Straight of limb, true of eye, steady and aglow.
They were staunch to the end against odds uncounted,
They fell with their faces to the foe.

They shall grow not old, as we that are left grow old:
Age shall not weary them, nor the years condemn.
At the going down of the sun and in the morning,
We will remember them.

They mingle not with their laughing comrades again;
They sit no more at familiar tables of home;
They have no lot in our labour of the day-time;
They sleep beyond England's foam.

The second line of the fourth stanza, 'Age shall not weary them, nor the years condemn', draws upon Enobarbus' description of Cleopatra in Antony and Cleopatra: 'Age cannot wither her, nor custom stale'.[2]

There has been some debate as to whether the line "Age shall not weary them, nor the years condemn" should end with the words "condemn" or "contemn". Contemn means to "treat with contempt". When the poem was first printed in The Times on 21 September 1914 the word "condemn" was used. This word was also used in the anthology The Winnowing Fan: Poems of the Great War in 1914 in which the poem was later published. If the original publication had contained a misprint, Binyon would have had the chance to make amendments, so it seems unlikely that the word "contemn" was meant. The issue of which word was meant seems to have arisen only in Australia, with little debate in other Commonwealth countries that mark Remembrance Day.[3]

Use at memorial services

The "Ode of Remembrance" is regularly recited at memorial services held on days commemorating World War I, such as ANZAC Day, Remembrance Day, and Remembrance Sunday. In Australia's Returned and Services Leagues, and in New Zealand's numerous RSAs, it is read out nightly at 7 p.m., followed by a minute's silence. In Australia and New Zealand it is also part of the Dawn service at 4.28 a.m. Recitations of the "Ode of Remembrance" are often followed by a playing of the "Last Post". In Canadian remembrance services, a French translation[4] is often used along with or instead of the English ode.

The line Lest we forget, taken from Kipling's poem "Recessional" (which incidentally has nothing to do with remembering the fallen in war), is often added as if were part of the ode and repeated in response by those listening, especially in Australia. In the United Kingdom, Australia, New Zealand and Singapore, the final line of the ode, "We will remember them", is repeated in response. In Canada, the second stanza of the above extract has become known as the Act of Remembrance, and the final line is also repeated.[5]

The ode is also read at the Menin Gate, every evening at 8 p.m., after the first part of the "Last Post". It is mostly read by a British serviceman. The recital is followed by a minute of silence.

Sir Edward Elgar set to music three of Binyon's poems ("The Fourth of August", "To Women", and "For the Fallen", published within the collection "The Winnowing Fan") as The Spirit of England, Op. 80, for tenor or soprano solo, chorus, and orchestra (1917). His setting of "For the Fallen" sparked some controversy as it was published after another setting of the same poem by the composer Cyril Rootham in 1915. Neither composer was responsible for this, and Elgar initially offered to withdraw but was persuaded to continue by the literary and art critic Sidney Colvin and by Binyon himself.[6]

"They shall grow not old..." was set to music by Douglas Guest in 1971, and has become a well-known feature of choral services on Remembrance Sunday. Nottingham-based composer Alex Patterson also wrote a setting of the text in 2010.[7] The text of "For the Fallen" has also been set by Mark Blatchly for treble voices, organ and trumpet (which plays "The Last Post" in the background).[8] In March 2015, a new musical setting was released by Gil Orms. [9]

Time of our Darkness, the title of a novel by the South African author Stephen Gray, is a reference to the last two lines of "For the Fallen": 'As the stars that are starry in the time of our darkness, To the end, to the end they remain.'

Artists Rifles, a CD audiobook published in 2004, includes a reading of "For the Fallen" by Binyon himself. The recording itself is undated and appeared on a 78 rpm disc issued in Japan. Other Great War poets heard on the CD include Siegfried Sassoon, Edmund Blunden, Robert Graves, David Jones and Edgell Rickword.[10]