The Odeon Leicester Square is a cinema which occupies the centre of the eastern side of Leicester Square in London, dominating the square with its huge black polished granite facade and 120 feet (37 m) high tower displaying its name. Blue neon outlines the exterior of the building at night. It was built to be the flagship[2] of Oscar Deutsch's Odeon Cinema Circuit and still holds that position today. It hosts numerous European and world film premieres[3][4][5][6] including the annual Royal Film Performance.[7]

The Odeon is the largest single-screen cinema in the United Kingdom and one of the few with its circle and stalls remaining intact. The cinema is fully equipped to show films in 35mm, 70mm and digital on a large screen, as well as extensive stage facilities for the occasional live show.

The cinema still has an operating Compton organ, its console lit from within by coloured lighting, and a safety curtain detailed in 1930s art-deco motifs.

Two sets of tabs (curtains) are also installed and used for most performances. The cinema houses all major digital sound systems: Sony Dynamic Digital Sound, Dolby Digital and DTS. It had the UK's first wide-screen installed in 1953, and more recently, was the first to have a digital projector installed in 1999.

There are 1683 seats – reduced from nearly 2000 to make way for greater leg-room – with a large circle bar and even 'Royal Retiring Room' for visiting monarchs. Seating is divided between the Royal Circle, Rear Circle and Stalls.

In March 2011, all the cinema's screens converted to Digital Projection equipment with 3D capability. Up until 2009 the cinema and film distributors did not have faith in the reliability of digital presentations, so the cinema would run a 35mm print alongside. If the digital show failed the projectionist would switch to film. If that projector then failed, the performance would be abandoned. One 35mm /70mm projector has been retained, but is very rarely used. A silver screen is used for 3D presentations, placed in front of the white screen used for 2D presentations. The silver screen is a fraction smaller and screen tabs are not used during 3D performances. Most of the trained projectionists at the Odeon retired, or were made redundant in 2011. Presentations are now mostly automated. 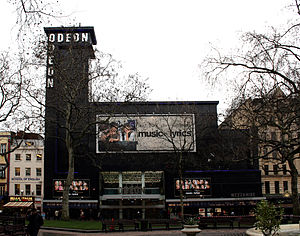 The Odeon as seen from Leicester Square

The Odeon was built in 1937 to the design of Harry Weedon and Andrew Mather on the site of the Turkish Baths and the adjoining Alhambra Theatre a large music hall dating from the 1850s. The site cost £550,000, the cinema took seven months to build at a cost of £232,755[2] with 2116 seats.[8] The opening night was Tuesday 2 November 1937; the film shown that night was The Prisoner of Zenda.[2]

Until 1967, the interior was a magnificent art-deco auditorium, with a ribbed ceiling, concealing stripped lighting. Two bas relief sculptures of naked nymphs were positioned on the side walls, as if leaping towards the screen. All the seats were covered in a faux-leopard skin material. A rather misguided modernisation in 1967 destroyed most of this grandeur, although since the 1980s, restoration programmes have restored much of the detail, including the figures, seating pattern and much of the ribbed effect on the ceiling.

The first wide-screen (screen ratio 1.66:1) ever installed in Great Britain was premiered on 14 May 1953,[9] the film shown was Tonight We Sing. The British debut of CinemaScope (screen ratio 2.55:1) following soon after on 19 November 1953[10] with the quasi-biblical epic, The Robe. The first cinema to show cinemascope in London was the Odeon Tottenham Court Road (9 June 1953) which was also the venue for the first screening of Cinerama. http://cinematreasures.org/theaters/11046

After Nigel Wolland's retirement in 2006, Mark Nice was appointed the cinema's Chief Engineer. Mark Nice has recently been promoted the position of Odeon Engineer with Toni Purvis assuming the role of Operations Manager Digital.

Tucked next door was the Odeon Mezzanine, containing five much smaller screens, each seating between 50 and 60 patrons. The site of this 'mini-plex' was once an alleyway running alongside the main house, until development in 1988 turned it into one of London's first 'mini-plex' cinemas. The Mezzanine has now been converted into the 'Odeon Studios', which continue to comprise five screens.[13]