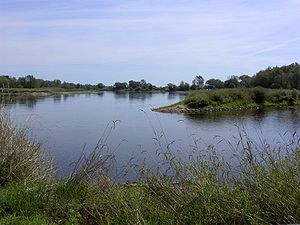 Estuary of the Lusatian Neisse into the Oder 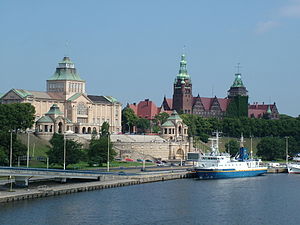 The Oder (German pronunciation: [ˈoːdɐ]; Czech and Polish: Odra)[1] is a river in Central Europe. It rises in the Czech Republic and flows (generally north- and northwest-ward) through western Poland, later forming 187 kilometres (116 mi) of the border between Poland and Germany, part of the Oder–Neisse line. The river ultimately flows into the Szczecin Lagoon north of Szczecin and then into three branches (the Dziwna, Świna and Peene) that empty into the Gulf of Pomerania of the Baltic Sea.

The Oder is known by several names in different languages, but the modern ones are very similar: English and German: Oder; Czech, Polish, and Lower Sorbian: Odra, Upper Sorbian: Wódra; Kashubian: Òdra (pronounced [ˈwɛdra]); Medieval Latin: Od(d)era; Renaissance Latin: Viadrus (invented in 1534). Ptolemy gives for the localization of modern Oder a river Συήβος (Suebos, Latin: Suevus, from the name for the tribe of the Suebi), which resembles the modern name Świna for the main connection from the Szczecin Lagoon to the Baltic Sea. A mouth named Οὐιαδούα (or Οὐιλδούα, graphical similarity of Α and Λ), therefore Latin Viadua or Vildua, is localized by him at one third of the distance between Suebos and Vistula, maybe it is modern Wieprz.[2][3] In Old Church Slavonic language, the name of the river is Vjodr.[4]

The main branch empties into the Szczecin Lagoon near Police, Poland. The Szczecin Lagoon is bordered on the north by the islands of Usedom (west) and Wolin (east). Between these two islands, there is only a narrow channel (Świna) going to the Bay of Pomerania, which forms a part of the Baltic Sea.

The largest city on the Oder is Wrocław, in Lower Silesia.

The Oder is navigable over a large part of its total length, as far upstream as the town of Koźle, where the river connects to the Gliwicki Canal. The upstream part of the river is canalized and permits larger barges (up to CEMT Class IV) to navigate between the industrial sites around the Wrocław area.

Further downstream the river is free flowing, passing the towns of Eisenhüttenstadt (where the Oder–Spree Canal connects the river to the Spree in Berlin) and Frankfurt upon Oder. Downstream of Frankfurt the river Warta forms a navigable connection with Poznań and Bydgoszcz for smaller vessels. At Hohensaaten the Oder–Havel Canal connects with the Berlin waterways again.

Near its mouth the Oder reaches the city of Szczecin, a major maritime port. The river finally reaches the Baltic Sea through the Szczecin Lagoon and the river mouth at Świnoujście.[5]

The river in Germania Magna was known to the Romans as the Viadrus or Viadua in Classical Latin, as it was a branch of the Amber Road from the Baltic Sea to the Roman Empire (see via). In German language it was and is called the Oder, written in older records as Odera or Oddera in Medieval Latin documents. It was mentioned in the Dagome iudex, which described territory of the Duchy of Poland under Mieszko I of Poland ca. 990, as a part of duchies western frontier.

Before Slavs settled along its banks, Oder was an important trade route and towns in Germania were documented along with many tribes living between the rivers Albis (aka Elbe), Oder and Vistula. Centuries later, after Germanic tribes were long gone, the Bavarian Geographer (ca. 845) specifies the following West Slavic peoples: Sleenzane, Dadosesani, Opoloni, Lupiglaa, and Gоlеnsizi in Silesia and Wolinians and Pyrzycans in Western Pomerania. A document of the Bishopric of Prague (1086) mentions Zlasane, Trebovyane, Poborane, and Dedositze in Silesia.

In the 13th century, the first dams were built to protect agricultural lands.

The Finow Canal, built for the first time in 1605, connects Oder and Havel. After completion of the more straight Oder–Havel Canal in 1914, its economic relevance decreased.

The earliest important undertaking with a view of improving the waterway was due to the initiative of Frederick the Great, who recommended the diversion of the river into a new and straight channel in the swampy tract of land known as Oderbruch near Küstrin. The work was carried out in the years 1746–53, a large tract of marshland being brought under cultivation, a considerable detour cut off and the main stream successfully confined to a canal.

In the late 19th century three additional alterations were made to the waterway:

By the Treaty of Versailles the navigation on the Oder became subject to International Commission of the Oder.[6] Following the articles 363 and 364 of the Treaty Czechoslovakia was entitled to lease in Stettin (now Szczecin) its own section in the harbour, then called Tschechoslowakische Zone im Hafen Stettin.[7] The contract of lease between Czechoslovakia and Germany, and supervised by the United Kingdom, was signed on February 16, 1929, and would end in 2028, however, after 1945 Czechoslovakia did not regain this legal position, de facto abolished in 1938–39.

At the 1943 Tehran Conference the allies decided that the new Eastern border of Germany would run along the Oder[8] but after World War II, the Oder and the Lusatian Neisse formed the Oder–Neisse line, which was designated by the victorious allies at the Potsdam Conference as the new border between Poland and Germany. A significant percentage of the German populations east of these two rivers were evacuated by the Nazis or fled before the approaching Red Army. After the war, the remaining population was forcibly expelled in accordance with the Potsdam Agreement.[9] East Germany confirmed the border with Poland in 1950, then West Germany, after a period of refusal, finally accepted the border in 1970. In 1990 newly reunified Germany and the Republic of Poland signed a treaty recognizing it as their border. 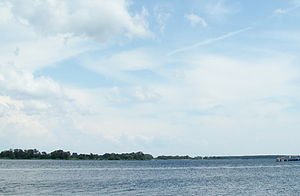 Świna branch (between Wolin and the Usedom islands):

Peene branch (between Usedom Island and the German mainland):