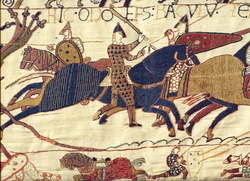 Odo, club in hand, rallies Duke William's troops during the Battle of Hastings in 1066, as shown on the Bayeux Tapestry. Latin Tituli above: HIC ODO EP[ISCOPU]S BACULU[M] TENENS CONFORTAT PUEROS ("Here Bishop Odo, holding a club, gives strength to the boys"). Duke William is also shown wielding a club during the battle in another scene

Odo, Earl of Kent (died 1097) and Bishop of Bayeux, was the half-brother of William the Conqueror, and was, for a time, second in power after the King of England.

He was the son of William the Conqueror's mother Herleva and Herluin de Conteville. Count Robert of Mortain was his younger brother. There is uncertainty about his birth date. Some historians have suggested he was born around 1035. Duke William made him bishop of Bayeux in 1049. so it has been suggested that his birth was as early as 1030, making him about nineteen rather than fourteen at the time.

Norman Conquest and after

Although he was an ordained Christian cleric, he is best known as a warrior and statesman. He found ships for the invasion of England and is one of the very few proven Companions of William the Conqueror, known to have fought at the Battle of Hastings in 1066. The Bayeux Tapestry, probably commissioned by him to adorn his own cathedral, appears to labour the point that he did not actually fight, that is to say shed blood, at Hastings, but rather encouraged the troops from the rear. The Latin annotation embroidered onto the Tapestry above his image reads: "Hic Odo Eps (Episcopus) Baculu(m) Tenens Confortat Pueros", in English "Here Odo the Bishop holding a club strengthens the boys". It seems that his clerical status forbade him from using a sword,[1] though this is highly dubious as the club was a common weapon and used often by leadership,[2] specifically by Duke William himself, as also depicted in the Bayeux Tapestry. He was accompanied by William the carrier of his crozier and a retinue of servants and members of his household.

In 1067, Odo became Earl of Kent, and for some years he was a trusted royal minister. On some occasions when William was absent (back in Normandy), he served as de facto regent of England,[3] and at times he led the royal forces against rebellions (e.g. the Revolt of the Earls): the precise sphere of his powers is not certain, however. There are also other occasions when he accompanied William back to Normandy.

During this time Odo acquired vast estates in England, larger in extent than anyone except the king: he had land in twenty-three counties, primarily in the south east and in East Anglia.

In 1076 Odo was tried in front of a large and senior assembly over the course of three days at Penenden Heath in Kent for defrauding the Crown and the Diocese of Canterbury. At the conclusion of the trial he was forced to return a number of properties and his assets were re-apportioned.[4]

In 1082, he was suddenly disgraced and imprisoned for having planned a military expedition to Italy. His motivations are not certain. Chroniclers writing a generation later said Odo desired to make himself Pope,[5] but the contemporary evidence is ambiguous.[citation needed] Whatever the reason, Odo spent the next five years in prison, and his English estates were taken back by the king, as was his office as Earl of Kent. Odo was not deposed as Bishop of Bayeux, however.

On his deathbed in 1087, King William I was reluctantly persuaded by his half-brother, Robert, Count of Mortain, to release Odo. After the king's death, Odo returned to England. William's eldest son, Robert Curthose had been made duke of Normandy, while Robert's brother William had received the throne of England.[6]:433–436 The bishop supported Robert Curthose's claim to England. The Rebellion of 1088 failed and William Rufus permitted Odo to leave the kingdom. Afterwards, Odo remained in the service of Robert in Normandy.[6]:450–452

He joined the First Crusade, and started in the duke's company for Palestine, but died on the way at Palermo in January or February 1097.

Little good is recorded of Odo, and it was recorded that his vast wealth was gained by extortion and robbery. His ambitions were boundless and his morals lax[citation needed]; however, like many prelates of his age, he was a patron of learning and the arts. He was also a great architect. He founded the Abbaye de Troarn in 1059 and rebuilt the cathedral of his see, and is likely to have commissioned the celebrated Bayeux Tapestry. He may also have sponsored an early version of The Song of Roland. More certain is his development of the cathedral school in Bayeux, and his patronage of a number of younger men who later became prominent prelates.

William Stearns Davis writes in Life on a Medieval Barony:

Bishop Odo of Bayeux fought at Hastings (1066) before any such authorized champions of the church existed. ...That bishops shall restrain from warfare is really a pious wish not easily in this sinful world to be granted.[7]

On screen, Odo has been portrayed by John Nettleton in the two-part BBC TV play Conquest (1966), part of the series Theatre 625, and by Denis Lill in the TV drama Blood Royal: William the Conqueror (1990).