Odo I, Duke of Burgundy 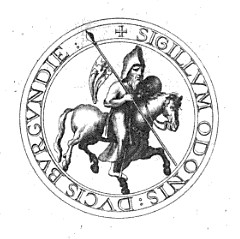 Odo I (1060 – 1102[1]), also known as Eudes, surnamed Borel and called the Red, was Duke of Burgundy between 1079 and 1103. Odo was the second son of Henry of Burgundy and grandson of Robert I. He became the duke following the abdication of his older brother, Hugh I, who retired to become a Benedictine monk.[2]

An interesting incident is reported of Odo by an eyewitness, Eadmer, biographer of Anselm of Canterbury. While Saint Anselm was progressing through Odo's territory on his way to Rome in 1097, the bandit, expecting great treasure in the archbishop's retinue, prepared to ambush and loot it. Coming upon the prelate's train, the duke asked for the archbishop, whom they had not found. Anselm promptly came forward and took the duke by surprise, saying "My lord duke, suffer me to embrace thee." The flabbergasted duke immediately allowed the bishop to embrace him and offered himself as Anselm's humble servant.