Odo was the eldest son of Robert the Strong, Duke of the Franks and Marquis of Neustria, belonging to the branch known as the Robertians. After his father's death in 866, Odo inherited his father's title of Marquis of Neustria. Odo lost this title in 868 when King Charles the Bald appointed Hugh the Abbot to the title, but regained it following the death of Hugh in 886. After 882, he held the post of Count of Paris. Odo was also the lay abbot of St. Martin of Tours.[1][2]

For his skill and bravery in resisting the attacks of the Vikings at the Siege of Paris, Odo was chosen by the western Franks to be their king following the removal of emperor Charles the Fat. He was crowned at Compiègne in February 888 by Walter, Archbishop of Sens.[3] 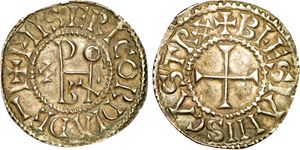 Denier of Odo of France

Odo continued to battle against the Vikings and defeated them at Montfaucon, but he was soon involved in a struggle with powerful nobles who supported the claim of Charles the Simple to the Frankish throne.

In 889 and 890 Odo granted special privileges to the County of Manresa in Osona. Because of its position on the front line against Moorish aggression, Manresa was given the right to build towers of defence known as manresanas or manresanes. This privilege was responsible for giving Manresa its unique character, distinct from the rest of Osona, for the next two centuries.

To gain prestige and support, Odo paid homage to the Eastern Frankish King Arnulf of Carinthia. But in 894 Arnulf declared his support for Charles, and after a conflict which lasted three years, Odo was compelled to come to terms with his rival and surrender a district north of the Seine to him.