County Offaly (Irish: Contae Uíbh Fhailí) is a county in Ireland. It is part of the Midlands Region and is also located in the province of Leinster. It is named after the ancient Kingdom of Uí Failghe and was formerly known as King's County. Offaly County Council is the local authority for the county. The population of the county is 76,687 according to the 2011 census.

Tullamore is the county town and largest town in Offaly and is the 30th largest in Ireland. Offaly borders seven counties: Galway, Roscommon, Tipperary, Laois, Westmeath, Kildare and Meath. The Slieve Bloom Mountains are in the southern part of the county on the border with County Laois. Offaly has the 24th highest county peak in Ireland. The highest point is Arderin (Irish: Ard Éireann) in the Slieve Blooms at 527 metres (1,729 feet). The Slieve Bloom Mountains contain the county's highest points including Stillbrook Hill and Wolftrap Mountain which are the county's second and third highest peaks. Croghan Hill rises from the Bog of Allen and is located in northern Offaly. Although only 234 metres high, it is known for its view over the surrounding area and it stands out by itself.

The floodplain of the River Shannon is in the north-western part of the county. The River Camcor runs through the town of Birr and is a Wild Trout Conservation Area. The River Brosna runs across the county from Lough Owel in Westmeath to Shannon Harbour. Silver River runs through several towns in the south of the county before joining Brosna near the town of Ferbane. The Grand Canal also runs across the county from Edenderry on the north-east to Shannon Harbour before joining the Shannon. The county contains many small lakes from Lake Boora to Pallas Lake and it also contains 42 hectares of swamp. There are a number Eskers in the counties landscape including Esker Riada.

Offaly largely comprises a flat landscape and is known for its extensive bog and peatlands. There are many large bogs in Offaly including the Bog of Allen, Clara bog, Boora bog and Raheenmore Bog which are spread out across the county with the Bog of Allen extending into four other counties. The county consists of approximately 42,000 hectares of peatlands which is 21% of Offaly's total land area.

Offaly contains approximately 9,000 hectares (22,000 acres) of forest and woodland area, which only amounts to 4.5% of the county's land area. This includes woodlands within the Slieve Blooms and the Lough Boora Parklands. Roughly 75% of Offaly's forested area is Conifer High Forest. 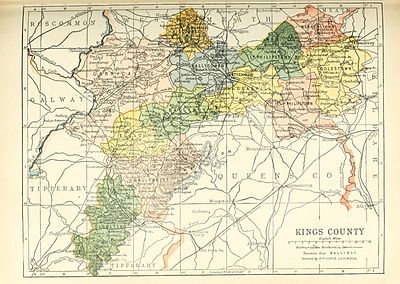 The following are the historical baronies located in County Offaly:

One of the earliest known settlements in County Offaly is at Boora bog which dates back to the Mesolithic era. Excavations here provides evidence of a temporary settlement as no structures were found at the site. Stone axes, arrow heads and blades were discovered which date to between 6,800 – 6,000 BCE.[10]

The Dowris Hoard dating from the Late Bronze Age was found in a bog at Dowris, Whigsborough near Birr. It is the largest collection of Bronze Age objects ever found in Ireland.[11] It includes more than 200 items of which roughly 190 are extant, 111 in the National Museum of Ireland and 79 in the British Museum.[12] Forty four spearheads were found, forty-three axes, twenty-four trumpets, and forty-four crotals (a kind of bell or chime instrument, unique to Ireland). A bronze bucket was also found, it was constructed of sheets of bronze riveted together, this item is considered to be an imported item, two other buckets were also found and these are presumed to be native copies.[12]

After Christianisation, the monastic complex of Clonmacnoise was erected at the River Shannon near Shannonbridge. It is today a significant tourist destination.

The county itself was formed following the Tudor plantations of Laois and Offaly in an attempt by the English Crown to expand its sphere of influence in Ireland which had declined following the Norman Conquest of Ireland. Both Laois (Leix)and Offaly (Uí Failghe) were petty kingdoms in Gaelic Ireland located just outside the Pale (a region around Dublin and the mid east of Ireland that remained loyal to the English Crown following the Norman Conquest). The older kingdoms of Leix and Uí Failghe are not coterminous with the present day counties that were formed. The Kingdom of Uí Failghe from which the name Offaly is derived, was ruled by the Ó Conchubhair Fáilghe (anglicised as: O'Conor Faly) whose territory extended from the east of the county into north Kildare. The Kingdom of Firceall ruled by the O'Molloy clan constituted much of the centre of the county. The Kingdom of Firceall was part of the Kingdom of Meath while Uí Failghe was part of the Kingdom of Leinster. Much of the south of the present day county (as well as northern County Tipperary) was ruled by Ó Céarbhaill of Éile (anglicised as: O'Carroll Ely). Ely formed part of the Kingdom of Munster. These petty kingdoms were swept aside by the Tudor plantations. In 1556, an Act of the Parliament of Ireland created "King's County", named after Philip, the then King of Ireland.[13] This replaced the old Kingdoms with Baronies and the present day County System. Despite the county's name being upheld as Offaly through the 2001 Local Government Act, no legislation was ever enacted after independence explicitly changing the name from King's County, the name formally established under the 1898 Local Government Act which continued to have legal effect.

Offaly County Council is the local authority for the county. The council is responsible for local services such as housing policy, social and cultural services, economic development and planning, motor taxation and infrastructural policy in the county. 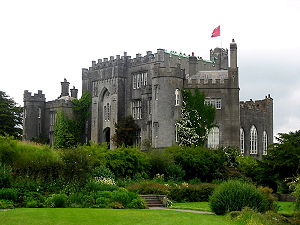 The 2006 population figure for County Offaly is the highest for the county since 1881.[16] The Central Statistics Office estimates that the increase in population between 2002 and 2006 (7,205) comprised a natural increase of 2,026 people with the balance of 5,179 accounted for by net in-migration from within Ireland as well as abroad. The population increased by 11.3% between 2002 and 2006 which was a greater rate than the national average rate of 8.2%. This may be attributed to the county's proximity to the Greater Dublin Area, increased accessibility to Dublin (M6, M7, and improved rail services) and lower house prices than in Dublin.[16]

Gaelic games are popular in the county. Offaly GAA consists of some 44 clubs playing Gaelic football and hurling in communities throughout the county. Birr is generally considered a hurling stronghold with Birr GAA winning four All-Ireland Senior Club Hurling Championships. County teams have also had national success in both hurling and football, winning the Liam McCarthy Cup four times and the Sam Maguire Cup three times. The football team is perhaps best known for the Seamus Darby goal in the dying minutes of the 1982 football final when Offaly took the title by one point denying Kerry an historic five All-Ireland titles in a row. Traditionally, west Offaly has been the hurling stronghold with clubs like Birr, Coolderry, And Kilcormac/Killoughey enjoying success in the Leinster and All-Ireland Championships

Famous hurlers from Offaly include:

Famous Footballers from Offaly include:

Other popular sports in the county include rugby and Association Football where Tullamore Town F.C. are in the A Championship.

There are many golf courses located in the county. Esker Hills is one of the most popular. Irish golfer Shane Lowry is a member here. He is from the town of Ferbane outside Tullamore. As an amateur, he won the 2009 Irish Open. 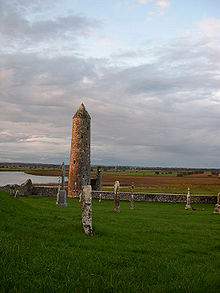 Traditionally, agriculture and industry have been the main driving force of the economy in the county. Offaly has extensive bogland, particularly in the northern parts of the county, that forms part of the Bog of Allen. Bord na Móna was founded in 1946 and provided employment to hundreds of people in Offaly by making peat briquettes (for home domestic use) and supplying peat to power stations operated by ESB. Peat briquettes are currently made at the Bord na Móna factory at Derrinlough near Birr. Power stations are operating at Shannonbridge and Edenderry. With the continuing depletion of the bogs a number of power stations have closed down in recent years. The ESB power station at Lumcloon, Ferbane was a major employer in the midlands but closed in 2001. Rhode power station closed down soon afterwards. These were major landmarks in Offaly with large cooling towers that were visible for miles around Offaly and beyond, but were demolished soon after the stations closed. Many bogs are now used as wildlife reserves or for tourism activities such as Lough Boora.

The opening of the Grand Canal in the 18th century brought prosperity to towns such as Banagher and Tullamore. Both towns were important stops on the Dublin to Limerick navigation which supported a number of industries and brought cheap and efficient water transport to the county in that era.

The Celtic Tiger also brought an increase in economic activity to Offaly with business enterprise and industrial parks opening in Birr, Edenderry and Tullamore. Many people particularly in the east of the county are within an easy commuting distance to Dublin where many find employment.

Offaly is well served by rail transport. Railway stations are located at Tullamore and Clara. Both stations are on the main Dublin-Westport/Galway railway line with regular trains serving the area especially for Dublin commuters. Portarlington railway station is located just over the County Laois border and is in a catchment area for the south east of the county. Portarlington railway station is on the main Dublin-Cork railway line with regular commuter services to Heuston Station, Dublin and intercity services to Cork, Limerick, Killarney & Tralee.

The Limerick-Ballybrophy railway line travels through the south of the county however there are no railway stations on the line in County Offaly. The nearest stations are located at Cloughjordan and Roscrea both just outside the county boundary. A railway line from Birr connected to the line at Roscrea until it was closed in the 1960s. A railway line also connected Birr to Portumna.

Three main national secondary routes pass through the county. The N52 road passes from Kilbeggan to Tullamore and Birr which then continues to Nenagh where it intersects with the M7. The N62 from Athlone passes through Ferbane and Birr and continues onto Roscrea and Thurles. The N80 route starts in Tullamore and continues to the south east passing through Portlaoise and Carlow. There are no main national primary routes in the county, however, the M6 skirts the county to the north and the M7 skirts the county to the south through Moneygall. Road infrastructure has improved with the completion of the Tullamore bypass in 2009 and improved access to regional cities following completion of the intercity motorway network.

The Grand Canal connecting Dublin to the river Shannon was constructed through the towns of Edenderry and Tullamore and joins the Shannon at Shannon Harbour. Traditionally this was an important route for transport, communication and trade between Dublin, Limerick and the midlands of Ireland. The route fell into decline as road transport became more popular. Much of the route is now used for boating and leisure activities.

Midlands 103 (originally Midlands Radio 3) which broadcasts to Laois, Offaly and Westmeath is based in Tullamore and has studios across the midlands. RTÉ's medium wave transmitter broadcasting RTE Radio 1 was also located in Tullamore but transmission stopped in 2008.

A number of local newspapers are published in Offaly. The Offaly Independent and Tullamore Tribune are based in Tullamore. The Midland Tribune based in Birr covers local news in the west and south of the county as well as parts of northern Tipperary including the towns of Birr, Roscrea and Nenagh and surrounding areas. The Offaly Express was a former newspaper based in Tullamore. It closed down in July 2012 after 29 years in operation.