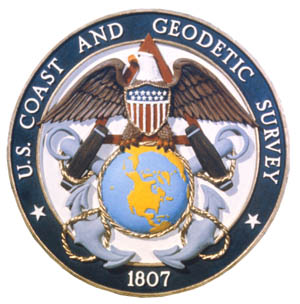 The Office of Coast Survey is the official chartmaker of the United States. Set up in 1807, it is one of the U.S. government's oldest scientific organizations. In 1878 it was given the name of Coast and Geodetic Survey (C&GS). In 1970 it became part of the National Oceanic and Atmospheric Administration (NOAA).

The agency was established in 1807 when President Thomas Jefferson signed the document entitled “An act to provide for surveying the coasts of the United States.”[1] While the bill’s objective was specific—to produce nautical charts—it reflected larger issues of concern to the new nation: national boundaries, commerce, and defense.

The early years were difficult. Ferdinand Rudolph Hassler, who was eventually to become the agency’s first superintendent, went to England to collect scientific instruments but was unable to return through the duration of the War of 1812. After his return, he worked on a survey of the New York Harbor in 1817, but Congress stepped in to suspend the work because of tensions between civilian and military control of the agency. After several years under the control of the U.S. Army, the Survey of the Coast was reestablished in 1832, and President Andrew Jackson appointed Hassler as superintendent.

Alexander Dallas Bache, great-grandson of Benjamin Franklin, was the second Coast Survey superintendent. Bache was a physicist, scientist, and surveyor who established the first magnetic observatory and served as the first president of the National Academy of Sciences. Under Bache, Coast Survey quickly applied its resources to the Union cause during the Civil War. In addition to setting up additional lithographic presses to produce the thousands of charts required by the Navy and other vessels, Bache made a critical decision to send Coast Survey parties to work with blockading squadrons and armies in the field, producing hundreds of maps and charts.[3] Bache detailed these activities in his annual reports to Congress.[4]

Coast Survey cartographer Edwin Hergesheimer created the map showing the density of the slave population[5] in the Southern states.[6][7]

Bache was also one of four members of the government's Blockade Strategy Board, planning strategy to essentially strangle the South, economically and militarily. On April 16, 1861, President Lincoln issued a proclamation declaring the blockade of ports from South Carolina to Texas. Bache’s Notes on the Coast[8] provided valuable information for Union naval forces.

Maps were of paramount importance in wartime:

It is certain that accurate maps must form the basis of well-conducted military operations, and that the best time to procure them is not when an attack is impending, or when the army waits, but when there is no hindrance to, or pressure upon, the surveyors. That no coast can be effectively attacked, defended, or blockaded without accurate maps and charts, has been fully proved by the events of the last two years, if, indeed, such a proposition required practical proof.

Coast Survey attracted some of the best and brightest scientists and naturalists. It commissioned the naturalist Louis Agassiz to conduct the first scientific study of the Florida reef system. James McNeill Whistler, who went on to paint the iconic “Whistler’s Mother”, was a Coast Survey engraver. The naturalist John Muir was a guide and artist on “Survey of the 39th Parallel” across the Great Basin of Nevada and Utah.

The agency’s men and women (women professionals were hired as early as 1845) led scientific and engineering activities through the decades. In 1926, they started production of aeronautical charts. During the height of the Great Depression, Coast and Geodetic Survey organized surveying parties and field offices that employed over 10,000 people, including many out-of-work engineers.[10]

In World War II, C&GS sent over 1,000 civilian members and more than half of its commissioned officers to serve as hydrographers, artillery surveyors, cartographers, army engineers, intelligence officers, and geophysicists in all theaters of the war. Civilians on the home front produced over 100 million maps and charts for the Allied Forces. Eleven members of the C&GS gave their lives during the war.

Today, the Office of Coast Survey provides the nation with navigation products and information for improving commerce and security, and for protecting coastal environments. Among other products and services the Office produces the U.S. nautical charts[12] and the United States Coast Pilot.[13]