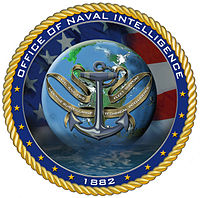 An "Office of Intelligence" is hereby established in the Bureau of Navigation for the purpose of collecting and recording such naval information as may be useful to the Department in time of war, as well as in peace.

To facilitate this work, the Department Library will be combined with the "Office of Intelligence," and placed under the direction of the Chief of the Bureau of Navigation.

Commanding and all other officers are directed to avail themselves of all opportunities which may arise to collect and to forward to the "Office of Intelligence" professional matters likely to serve the object in view.[1]

ONI's position as the naval intelligence arm began in earnest when the United States declared war on Spain in 1898 in response to the sinking of the U.S. battleship Maine in the harbor of Spanish-controlled Havana, Cuba. ONI's powers grew as it became responsible for the "protection of Navy Personnel, censorship and the ferreting out of spies and saboteurs."

In 1929, the Chief of Naval Operations made these functions the permanent duties of ONI. As Japan's military endeavors in Russia and China in the 1930s proved increasingly successful, the ONI began conducting domestic surveillance on Japanese Americans in Hawaii and the West Coast. By 1939, Naval Intelligence was working with the FBI and the Military Intelligence Division to monitor potential fifth column activity among Japanese immigrants and, to a lesser degree, their American-born children.[2] In 1941, Kenneth Ringle, assistant district intelligence officer for the Eleventh District in Los Angeles, was commissioned to conduct a thorough investigation on the "Japanese problem"; he found little evidence of Japanese American saboteurs and advised against mass incarceration in his final report to President Roosevelt. Ringle's views on Japanese American loyalty were shared by most ONI officials but were largely ignored by the Army and War Department commanders who pushed for the internment.[3] During World War II, Naval Intelligence became responsible for the translation, evaluation and dissemination of intercepted Japanese communications, in addition to counter-intelligence directed at Japanese Americans in and out of camp[2]—and its budget and staff grew significantly. While other parts of the Navy were downsized after the war, Fleet Admiral Nimitz ensured ONI's continued strength, which was to prove important during the Cold War.

In addition to its all-source capabilities, the Farragut Center conducts ONI's foreign materiel exploitation, signal intelligence analysis, modeling and simulation, and is home to the national maritime acoustic intelligence laboratory. The Farragut is one of four Centers of Excellence that are distinct Commands under the Office of Naval Intelligence (ONI).