Officer Candidate School or Officer Cadet School (OCS) are institutions which train civilians and enlisted personnel in order for them to gain a commission as officers in the armed forces of a country. How OCS is run differs between countries and services. Typically, it is of a short duration (less than a year), and the focus of the course is on military skills and leadership. This is in contrast with service academies which include academic instruction leading to a bachelor's degree.

Officer Cadet School of Australia – Portsea (OCS Portsea) commenced training officers for the Australian Army in 1951 and continued through to the end of 1985. Since OCS Portsea's closure in 1985, all Australian Army Officer training has been conducted at the Royal Military College, Duntroon in Canberra.[1] During the Vietnam War, the Officer Training Unit, Scheyville was used to train and commission National Servicemen as 2nd Lieutenants between 1965 and 1972.[2] 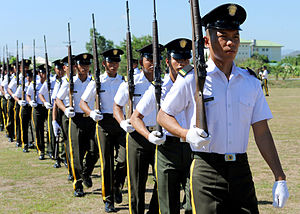 The need for commissioned officers after the U.S. liberation of the Philippines in the 1940s prompted the establishment of the School for Reserve Commission, which later became the Officer Candidate School. Early training was held at Camp Tinio, Bangad, Cabanatuan City, Nueva Ecija, Nichols Air Base in Pasay City and Fort Bonifacio in Metro Manila. Some graduates of these classes were sent to conflicts in both Korea and Vietnam. Later, the OCS training location was moved to Camp Capinpin, Tanay, Rizal from where 27 classes graduated between 1987 and 2005. Officer candidates with the rank of Probationary Second Lieutenant and Probationary Ensign have to undergo and pass the 12-month Officer Candidate Course before they can be commissioned as Regular and Reserve Officers in the Philippine Army, the Philippine Constabulary, the Philippine Air Force, the Philippine Navy and the Technical Service (Medical Administrative Corps and Women's Auxiliary Corps).

In 1993, OCS started accepting two foreign officer candidates from the Royal Brunei Armed Forces who joined the Officer Candidate Course "Balikatan" Class 12-94. In 1994, five female OCs belonging to AFPOCS "Balikatan" Class 12-94 graduated to become the first female officers of the AFP and were not included anymore as Women's Auxiliary Corps officers. Some Filipino officer candidates were also sent to train in Australia, New Zealand, Singapore and the United Kingdom. Today, each of the three armed services of the Armed Forces of the Philippines (AFP) – Army, Air Force and Navy – run their own officer training in separate locations such as Philippine Air Force Aviation OCS in Fernando Air Base, Lipa City; Philippine Army OCS in Camp O'Donnell, Capas, Tarlac; and Philippine Navy OCS in San Antonio, Zambales.

In Singapore, Officer Cadet School is a school within SAFTI Military Institute, which serves as the main center for training officers of all ranks. Other schools within the SAFTI MI complex include SAF Advanced Schools and Singapore Command and Staff College. Like the other schools on SAFTI MI, OCS is a tri-service institution which trains officers of the Army, Navy, and Air Force. A great deal of symbolism exists within the SAFTI MI complex to remind officers and aspiring officers of the tri-service nature of the Singapore Armed Forces. Unlike other countries, OCS is the only route to a commission in the SAF. Even selected cadets who hold scholarships to train in friendly service academies must complete two thirds of OCS and receive their commission before undergoing further training overseas.

OCS in Singapore lasts approximately 38 weeks. The first term consists of military knowledge applicable to all services, including military history and military law. Subsequently, Officer Cadets are streamed into their services based on aptitude and personal preference, and receive training specific to their service.

The Royal Military Academy Sandhurst (RMAS), commonly known as Sandhurst, is the British Army's initial officer training centre and is located in the town of Camberley, near the village of Sandhurst, Berkshire, about 55 kilometres (34 mi) southwest of London. The Academy's stated aim is to be "the national centre of excellence for leadership." All British Army officers, including late-entry officers who were previously Warrant Officers, as well as many other men and women from overseas, are trained at Sandhurst. The Academy is the British Army equivalent of the Britannia Royal Naval College Dartmouth, Royal Air Force College Cranwell, and the Commando Training Centre Royal Marines.

In the United States Armed Forces, Officer Candidate School (OCS) or the equivalent is a training program for college graduates and non-commissioned officers, Soldiers, Sailors, Marines, Airmen and Coast Guardsmen to earn commissions as officers. The courses generally last from six to seventeen weeks and include classroom instruction in military subjects, physical training, and leadership.

People may earn a commission in the United States Armed Forces through OCS or OTS, by staff appointment, through Reserve Officers Training Corps (ROTC), or through one of the five federal service academies. 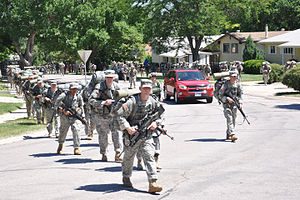