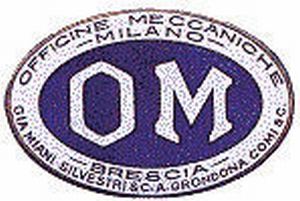 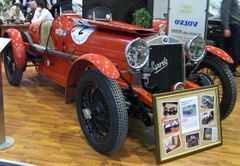 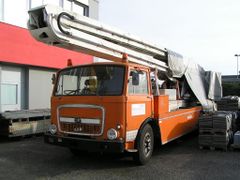 Officine Meccaniche or OM was an Italian car and truck manufacturing company, founded in 1918 in Milan as Societa Anonima Officine Meccaniche. It disappeared as such in 1975 subsumed into Iveco, but still exist as a forklift builder.

The inception of the company had resulted from the merger of two companies, Grondona Comi & C and Miani Silvestri & C.

In 1925 OM began to build trucks and buses, using licensed Swiss Saurer engines and other mechanical components. Ties with Saurer persisted all along OM life.

OM was taken over by the Fiat Group in 1938 and in the following year passenger car production ceased, and OM became a commercial vehicle and train part manufacturer.

Main new product in the WWII post-war era was the Leoncino (1950) a light truck in the 2.0 to 2.5 tons range, which was an immediate success. It became the forefather of several series of heavier but structurally similar models, namely Tigrotto, Tigre, Lupetto, Cerbiatto and Daino, launched between 1957 and 1964. Bus chassis versions of several of these models were also available.

In the 60s and 70s the light and medium-weight OM truck ranges were sold in Switzerland as Saurer-OM or Berna-OM, in Austria as Steyr-OM, in France as Unic-OM, and in Germany as Büssing-OM.

The end of OM

In 1968 OM was definitively merged into the Fiat Group as a brand belonging to the Commercial Vehicles division, which also included Fiat and Unic.

In 1975 it was absorbed (as part of the Fiat Group) into IVECO and the OM brand disappeared from the truck and bus markets, although it still survives as an independent forklift manufacturer.