Ohio's 6th congressional district is represented by Representative Bill Johnson (R-OH). This district runs along the southeast side of the state, bordering Kentucky, West Virginia, and Pennsylvania. It stretches from rural Lucasville through Athens and several older Ohio River industrial towns all the way to the Youngstown city limits.[2]

When Robert McEwen was first elected in 1980, the Sixth District of Ohio consisted of Adams, Brown, Clinton, Fayette, Highland, Pickaway, Pike, Scioto, and Ross Counties plus Clermont County outside the city of Loveland, Harrison Township in Vinton County and the Warren County townships of Clearcreek, Deerfield, Hamilton, Harlan, Massie, Salem, and Wayne.[3] At that time, The Washington Post described the Sixth as "a fail-safe Republican district."[4]

The Ohio General Assembly redrew the Sixth District following the results of the 1980 Census. The boundaries from 1983 to 1987 included all of Adams, Clinton, Fayette, Highland, Hocking, Jackson, Pike, Ross, Scioto, Vinton and Warren Counties, plus Waterloo and York Townships in Athens County; Wayne Township in Clermont County; Concord, Jasper, Marion, Perry, Union, and Wayne Townships in Fayette County; and Washington Township and the Cities of Miamisburg and West Carrollton in Montgomery County.[5]

Beginning with the 100th Congress in 1987, adjustments were made by the legislature to the boundaries; reapportionment between censuses is unusual in American politics. A small part of the Montgomery County territory was detached, as were parts of Fayette County in Washington Court House in Union Township and the townships of Jasper and Marion. Part of Brown County was added, Jackson and Eagle Townships. These were the boundaries for the rest of McEwen's service in Congress.[6]

The district was largely rural and agricultural with no large cities. One of the major industries was the United States Department of Energy's Portsmouth Gaseous Diffusion Plant at Piketon, which manufactured uranium for nuclear weapons. The district was 97 per cent white with a median household income of $21,761.[7]

In 1992, the district was altered significantly to accommodate Ohio's loss of two House seats in redistricting. The state legislature anticipated that Clarence Miller of the neighboring Tenth District would retire, and thus combined the southern end of his district (which included Athens, Gallipolis, and Ironton) with most of the area previously represented by McEwen. Although the district did not include Miller's hometown of Lancaster, Miller decided not to retire and instead challenged McEwen in the Sixth District primary in 1992. The campaign was bitter, and McEwen eked out only a narrow victory. In November, McEwen was upset by Democrat Ted Strickland, a prison psychologist. Strickland himself was defeated in 1994 by Republican Frank Cremeans, but won the seat back in 1996.

For 2002 the district was shifted dramatically eastward in an attempt to create a safe seat for Strickland[citation needed] while ending James Traficant's congressional career by placing his hometown of Poland, Ohio, into the Sixth District. Traficant ran in the neighboring Seventeenth District instead, but lost. The district currently includes all of Columbiana, Gallia, Jefferson, Lawrence, Meigs, Monroe, Noble and Washington counties, and portions of Athens, Belmont, Mahoning and Scioto counties.

In 2010, Republican Bill Johnson defeated incumbent Democrat Charles Wilson, returning the seat Republican for the first time since 1997. Following the 2010 United States Census, the bounds of the sixth district were changed again as Ohio lost two seats in Congress.[8] 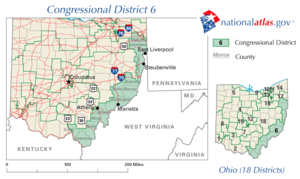