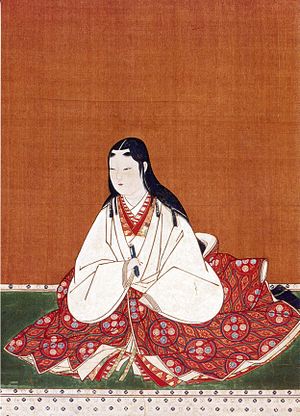 Oichi was the younger sister of Oda Nobunaga; and she was the sister-in-law of Nōhime, the daughter of Saitō Dōsan. Oichi was equally renowned for her beauty and her resolve. She was descended from the Taira and Fujiwara clans.

Life as a spouse and mother

Following Nobunaga's conquest of Mino in 1567, in an effort to cement an alliance between Nobunaga and rival warlord Azai Nagamasa, Nobunaga arranged for Oichi, then twenty years old, to marry Nagamasa. Their marriage was through political means, ensuring an alliance between the Oda and the Azai clans. She bore Nagamasa one son (Manjumaru) and three daughters – Yodo-dono, Ohatsu and Oeyo.

In the summer of 1570, Nagamasa betrayed his alliance with Nobunaga and went to war with him on behalf of the Asakura family. A story relates that Oichi sent her brother a sack of beans tied at both ends, ostensibly as a good-luck charm but in reality a warning that he was about to be attacked from both front and rear by the Asakura and Azai clans. According to the story, Nobunaga understood the message and retreated from his brother-in-law's assault in time.

The fighting continued for three years until the Asakura and other anti-Oda forces were destroyed or weakened. Oichi remained with her husband at Odani Castle throughout the conflict, even after Toyotomi Hideyoshi, a trusted vassal of Nobunaga at the time, began laying siege to the castle. When Odani was surrounded, Nobunaga requested that his sister be returned to him before the final attack. Nagamasa agreed, sending out Oichi and her three daughters.[5] Nagamasa had no hope of winning, and chose to commit seppuku.

Oichi and her daughters remained in the Oda family's care for the next decade. After Nobunaga was assassinated in 1582, his sons and vassals broke into two major factions, led by two of Nobunaga's favored generals, Shibata Katsuie and Hideyoshi. Nobunaga's third son, Nobutaka, belonged to the former group, and arranged for his aunt Oichi to marry Katsuie in order to ensure his loyalty to the Oda clan. But in 1583, Katsuie was defeated by Hideyoshi in the Battle of Shizugatake, forcing him to retreat to his home at Kitanosho Castle. As Hideyoshi's army lay siege to the castle, Katsuie implored Oichi to flee with her daughters and seek Hideyoshi's protection. Oichi refused, insisting on dying with her husband after their daughters were sent away. The couple reportedly died in the castle's flames. 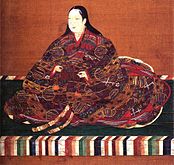 Oichi's three daughters each went on to become important historical figures in their own right. The eldest and the most famous, Chacha became a concubine to Hideyoshi, whose army had killed not only both her birth parents but also her stepfather. She became known as Yodo-dono or Yodogimi (from Yodo Castle, given to her by Hideyoshi), and she bore him his only two sons, including his heir Hideyori. Yodo-dono and Hideyori later died in the Siege of Osaka, in 1615, the final battle of the Warring States era. 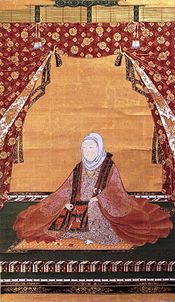 The second, Ohatsu, married Kyogoku Takatsugu, a man from a noble family once served by the Azai clan. The Kyogoku clan sided with Ieyasu after Hideyoshi's death, giving her the means to serve as an intermediary between Ieyasu and Yodo-dono. She worked in vain to end their hostilities, and after Yodo-dono and Hideyori's death, managed to save Hideyori's daughter by putting her in a convent.

The youngest, Oeyo (also called Ogō), married Tokugawa Hidetada, Ieyasu's heir and the second Tokugawa Shogun. They had many children, including the third Shogun Iemitsu, and Kazuko, consort to Emperor Go-Mizunoo. Kazuko's daughter Okiko became Empress Meishō, thus posthumously making Oichi both a grandmother to a Shogun and a great-grandmother to an Empress.

She's a playable character in the Samurai Warriors series of games, where her story is fleshed out. That same version is also in Pokémon Conquest (Pokémon + Nobunaga's Ambition in Japan), with her partner Pokémon being Jigglypuff and Wigglytuff.[6]

Oichi (under the alias Oyu of Odani) is a playable character in the game Onimusha 2: Samurai's Destiny.

There's even a version of her in the Sengoku Basara series of games, starting with the second one. She is depicted as a tragic, gloomy woman who wrongfully blames herself for everything to the point she is driven mad. Originally fighting with a Nagita, she later uses hands made from a dark aura.

She is also a recurring character in the Warriors Orochi series