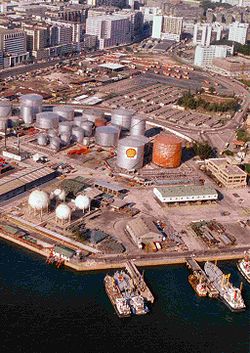 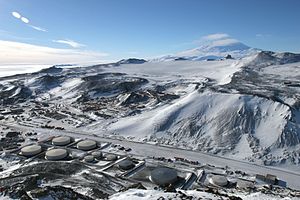 An oil depot (sometimes called a tank farm, installation or oil terminal) is an industrial facility for the storage of oil and/or petrochemical products and from which these products are usually transported to end users or further storage facilities. An oil depot typically has tankage, either above ground or underground, and gantries (framework) for the discharge of products into road tankers or other vehicles (such as barges) or pipelines.

Oil depots are usually situated close to oil refineries or in locations where marine tankers containing products can discharge their cargo. Some depots are attached to pipelines from which they draw their supplies and depots can also be fed by rail, by barge and by road tanker (sometimes known as "bridging").

Most oil depots have road tankers operating from their grounds and these vehicles transport products to petrol stations or other users.

An oil depot is a comparatively unsophisticated facility in that (in most cases) there is no processing or other transformation on site. The products which reach the depot (from a refinery) are in their final form suitable for delivery to customers. In some cases additives may be injected into products in tanks, but there is usually no manufacturing plant on site. Modern depots comprise the same types of tankage, pipelines and gantries as those in the past and although there is a greater degree of automation on site, there have been few significant changes in depot operational activities over time.

One of the key imperatives is Health, Safety and Environment (HSE) and the operators of a depot must ensure that products are safely stored and handled. There must be no leakages (etc.) which could damage the soil or the water table. 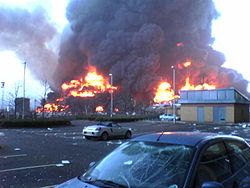 Fire protection is a primary consideration, especially for the more flammable products such as petrol (gasoline) and Aviation Fuel.

The ownership of oil depots falls into three main categories:

In all cases the owners may also provide "hospitality" or "pick up rights" at the facility to other companies. 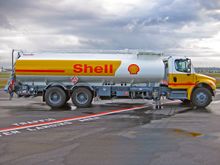 Most airports also have their own dedicated oil depots (usually called "fuel farms") where aviation fuel (Jet A or 100LL) is stored prior to being discharged into aircraft fuel tanks. Fuel is transported from the depot to the aircraft either by road tanker or via a hydrant system.

The world's third largest oil consumer had national reserves of 113 days of oil demand under the government's storage and 85 days held by the private sector at the end of December 2010. In this respect, the total oil stored in Japan in December stood at 587.4 million barrels. Japan requires the private sector to hold 70 days as oil reserves, but is making the period shorter by three days to 67 days. As such it will allow oil companies to release 8.9 million barrels of crude oil from mandatory stockpiles.[2]