From Infogalactic: the planetary knowledge core
(Redirected from Oilman)
Jump to: navigation, search 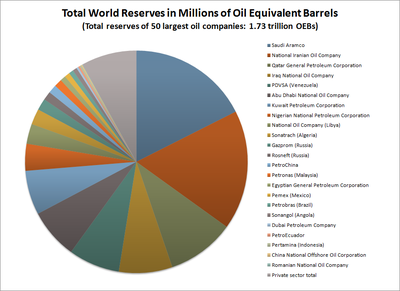 The petroleum industry include the global processes of exploration, extraction, refining, transporting (often by oil tankers and pipelines), and marketing petroleum products. The largest volume products of the industry are fuel oil and gasoline (petrol). Petroleum (oil) is also the raw material for many chemical products, including pharmaceuticals, solvents, fertilizers, pesticides, and plastics. The industry is usually divided into three major components: upstream, midstream and downstream. Midstream operations are usually included in the downstream category.

Petroleum is vital to many industries, and is of importance to the maintenance of industrial civilization in its current configuration, and thus is a critical concern for many nations. Oil accounts for a large percentage of the world’s energy consumption, ranging from a low of 32% for Europe and Asia, to a high of 53% for the Middle East.

Other geographic regions' consumption patterns are as follows: South and Central America (44%), Africa (41%), and North America (40%). The world consumes 30 billion barrels (4.8 km³) of oil per year, with developed nations being the largest consumers. The United States consumed 25% of the oil produced in 2007.[1] The production, distribution, refining, and retailing of petroleum taken as a whole represents the world's largest industry in terms of dollar value.

Governments such as the United States government provide a heavy public subsidy to petroleum companies, with major tax breaks at virtually every stage of oil exploration and extraction, including the costs of oil field leases and drilling equipment.[2] 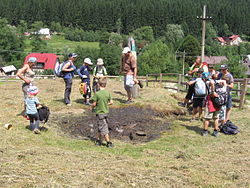 Petroleum is a naturally occurring liquid found in rock formations. It consists of a complex mixture of hydrocarbons of various molecular weights, plus other organic compounds. It is generally accepted that oil is formed mostly from the carbon rich remains of ancient plankton after exposure to heat and pressure in the Earth's crust over hundreds of millions of years. Over time, the decayed residue was covered by layers of mud and silt, sinking further down into the Earth’s crust and preserved there between hot and pressured layers, gradually transforming into oil reservoirs.[citation needed]

Petroleum in an unrefined state has been utilized by humans for over 5000 years. Oil in general has been used since early human history to keep fires ablaze and in warfare.

Its importance to the world economy evolved slowly, with whale oil used for lighting in the 19th century and wood and coal used for heating and cooking well into the 20th century. The Industrial Revolution generated an increasing need for energy which was met mainly by coal, and with other sources including whale oil. However, when it was discovered that kerosene could be extracted from crude oil and used as a lighting and heating fuel, petroleum was in great demand, and by the early twentieth century had become the most valuable commodity traded on world markets.[3] 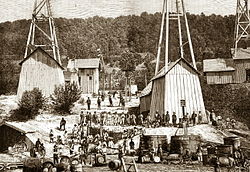 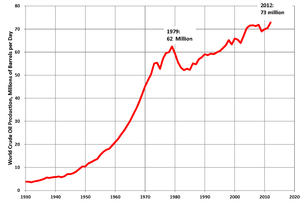 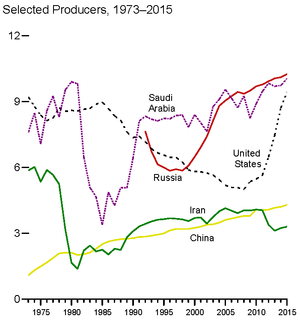 Imperial Russia produced 3,500 tons of oil in 1825 and doubled its output by mid-century.[4] After oil drilling began in what is now Azerbaijan in 1848, two large pipelines were built in the Russian Empire: the 833 km long pipeline to transport oil from the Caspian to the Black Sea port of Batumi (Baku-Batumi pipeline), completed in 1906, and the 162 km long pipeline to carry oil from Chechnya to the Caspian.

At the turn of the 20th century, Imperial Russia's output of oil, almost entirely from the Apsheron Peninsula, accounted for half of the world's production and dominated international markets.[5] Nearly 200 small refineries operated in the suburbs of Baku by 1884.[6] As a side effect of these early developments, the Apsheron Peninsula emerged as the world's "oldest legacy of oil pollution and environmental negligence."[7] In 1878, Ludvig Nobel and his Branobel company "revolutionized oil transport" by commissioning the first oil tanker and launching it on the Caspian Sea.[5]

The first modern oil refineries were built by Ignacy Łukasiewicz near Jasło (then in the dependent Kingdom of Galicia and Lodomeria in Central European Galicia), Poland in 1854–56.[8] These were initially small as demand for refined fuel was limited. The refined products were used in artificial asphalt, machine oil and lubricants, in addition to Łukasiewicz's kerosene lamp. As kerosene lamps gained popularity, the refining industry grew in the area.

The first commercial oil well in Canada became operational in 1858 at Oil Springs, Ontario (then Canada West).[9] Businessman James Miller Williams dug several wells between 1855 and 1858 before discovering a rich reserve of oil four metres below ground.[10][11] Williams extracted 1.5 million litres of crude oil by 1860, refining much of it into kerosene lamp oil.[9] Some historians challenge Canada’s claim to North America’s first oil field, arguing that Pennsylvania’s famous Drake Well was the continent’s first. But there is evidence to support Williams, not least of which is that the Drake well did not come into production until August 28, 1859. The controversial point might be that Williams found oil above bedrock while Edwin Drake’s well located oil within a bedrock reservoir. The discovery at Oil Springs touched off an oil boom which brought hundreds of speculators and workers to the area. Canada's first gusher (flowing well) erupted on January 16, 1862, when local oil man John Shaw struck oil at 158 feet (48 m).[12] For a week the oil gushed unchecked at levels reported as high as 3,000 barrels per day.

The first modern oil drilling in the United States began in West Virginia and Pennsylvania in the 1850s. Edwin Drake's 1859 well near Titusville, Pennsylvania, is typically considered the first true modern oil well, and touched off a major boom.[13][14] In the first quarter of the 20th century, the United States overtook Russia as the world's largest oil producer. By the 1920s, oil fields had been established in many countries including Canada, Poland, Sweden, Ukraine, the United States, Peru and Venezuela.[14]

The first successful oil tanker, the Zoroaster, was built in 1878 in Sweden, designed by Ludvig Nobel. It operated from Baku to Astrakhan.[15] A number of new tanker designs were developed in the 1880s.

In the early 1930s the Texas Company developed the first mobile steel barges for drilling in the brackish coastal areas of the Gulf of Mexico. In 1937 Pure Oil Company (now part of Chevron Corporation) and its partner Superior Oil Company (now part of ExxonMobil Corporation) used a fixed platform to develop a field in 14 feet (4.3 m) of water, one mile (1.6 km) offshore of Calcasieu Parish, Louisiana. In early 1947 Superior Oil erected a drilling/production oil platform in 20 ft (6.1 m) of water some 18 miles[vague] off Vermilion Parish, Louisiana. It was Kerr-McGee Oil Industries (now Anadarko Petroleum Corporation), as operator for partners Phillips Petroleum (ConocoPhillips) and Stanolind Oil & Gas (BP), that completed its historic Ship Shoal Block 32 well in November 1947, months before Superior actually drilled a discovery from their Vermilion platform farther offshore. In any case, that made Kerr-McGee's Gulf of Mexico well, Kermac No. 16, the first oil discovery drilled out of sight of land.[16][17] Forty-four Gulf of Mexico exploratory wells discovered 11 oil and natural gas fields by the end of 1949.[18]

After World War II ended, the countries of the Middle East took the lead in oil production from the United States. Important developments since World War II include deep-water drilling, the introduction of the Drillship, and the growth of a global shipping network for petroleum relying upon oil tankers and pipelines. In the 1960s and 1970s, multi-governmental organizations of oil–producing nations OPEC and OAPEC played a major role in setting petroleum prices and policy. Oil spills and their cleanup have become an issue of increasing political, environmental, and economic importance. 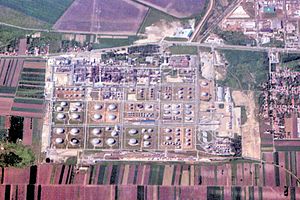 Oil companies used to be classified by sales as "supermajors" (BP, Chevron, ExxonMobil, ConocoPhillips, Shell, Eni and Total S.A.), "majors", and "independents" or "jobbers". In recent years however, National Oil Companies (NOC, as opposed to IOC, International Oil Companies) have come to control the rights over the largest oil reserves; by this measure the top ten companies all are NOC. The following table shows the ten largest national oil companies ranked by reserves[20][21] and by production in 2012.[22]

Most upstream work in the oil field or on an oil well is contracted out to drilling contractors and oil field service companies.[citation needed]

Aside from the NOCs which dominate the Upstream sector, there are many international companies that have a market share. For example:[23]

Some petroleum industry operations have been responsible for water pollution through by-products of refining and oil spills. The industry is the largest industrial source of emissions of volatile organic compounds (VOCs), a group of chemicals that contribute to the formation of ground-level ozone (smog).[27]

As petroleum is a non-renewable natural resource the industry is faced with an inevitable eventual depletion of the world's oil supply. The BP Statistical Review of World Energy 2007 listed the reserve/production ratio for proven resources worldwide. The study placed the ratio of proven reserves to production in the Middle East at 79.5 years, Latin America at 41.2 years and North America at 12 years. A simplistic interpretation of the ratio has led to many false predictions of immanent "running out of oil" since the early years of the oil industry in the 1800s. This has been especially true in the United States, where the ratio of proved reserves-to-production has been between 8 years and 17 years since 1920. Many have mistakenly interpreted the result as the number of years before the oil supply is exhausted. Such analyses do not take into account future reserve growth.[28]

The Hubbert peak theory, which introduced the concept of peak oil, questions the sustainability of oil production. It suggests that after a peak in oil production rates, a period of oil depletion will ensue. Since virtually all economic sectors rely heavily on petroleum, peak oil could lead to a partial or complete failure of markets.[29]

According to research by IBIS World, biofuels (primarily ethanol, but also biodiesel) will continue to supplement petroleum. However output levels are low, and these fuels will not displace local oil production. More than 90% of the ethanol used in the US is blended with gasoline to produce a 10% ethanol mix, lifting the oxygen content of the fuel.[30]

Researchers have discovered that the petrochemical industry can produce ground-level ozone pollution at higher amounts in winter than in summer. [1]

The Petroleum industry is a favorite subject in contemporary fiction. Films with oil-industry themes include There Will Be Blood (2007) set around Southern California's oil boom of the late 19th and early 20th centuries, and Syriana (2005) set in present-day Middle-East.