The River Oise (French pronunciation: ​[waz]) is a right tributary of the River Seine, flowing for 302 kilometres (188 mi) in Belgium and France. Its source is in the Belgian province Hainaut, south of the town Chimay. It crosses the border with France after about 20 kilometres (12 mi). It flows into the Seine in Conflans-Sainte-Honorine, near Paris. Its main tributary is the River Aisne.

Places along the river

In France, the Oise flows through the following départements and towns: 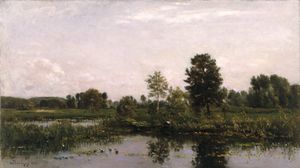 Brooklyn Museum - A Bend in the River Oise - Charles-François Daubigny

Over the past few centuries, the Oise has played an important role as an inland shipping waterway connecting the River Seine (and thus Paris) with the coastal regions of northern France, Belgium, and the Netherlands. With the projected construction of the Seine–Nord Europe Canal, a high-capacity water transportation system currently in development, the Oise will be linked at Janville, north of Compiègne, with the high-capacity Canal Dunkerque-Escaut, east of Arleux. The Seine-Nord Europe Canal will replace the old Canal de Saint-Quentin and the current Canal du Nord, the capacity of which is far below standard. When the new Seine-Nord connection is complete, it will allow large vessels to transport goods from the Seine, and thus Paris and its surrounding area, to the ports of Dunkerque, Antwerp and Rotterdam. 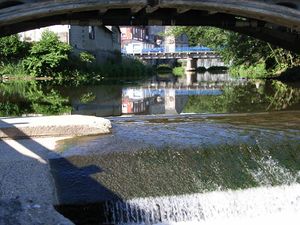 The river at Hirson