The Oklahoma City Barons were a professional ice hockey team in the American Hockey League (AHL). The team's first season was 2010–11. They played their home games at the Cox Convention Center, in Oklahoma City, Oklahoma.

On February 9, 2010, the American Hockey League Board of Governors approved of the relocation of the Oilers' inactive AHL franchise to Oklahoma City, after a five-year dormancy.[1] The franchise had gone through six incarnations, the first of which was the Nova Scotia Oilers and most recently the Edmonton Road Runners, who ceased play in 2005. The Barons were named through a fan contest.[2][3][4] Before the Barons, the Cox Convention Center in Oklahoma City had also been the home to former Central Hockey League franchises, the Oklahoma City Stars and the Oklahoma City Blazers. Bob Funk Jr., who headed the former Blazers' ownership group, is also at the helm of Prodigal Hockey LLC, the Barons' ownership group.

After the team's inaugural season in 2010–11, the Barons finished in the bottom five in the league for average attendance, including worst in the league in 2012–13.[8] On December 18, 2014, the Oilers and Barons announced that the Barons would cease operations after the current season citing continued financial losses stemming from poor attendance.[9]

On January 29, 2015, the AHL announced that the Edmonton Oilers' AHL franchise would become a new team in Bakersfield, California to take the place of the Barons beginning with the 2015–16 season. The Oilers' owned-and-operated Bakersfield Condors are part of a new Pacific Division that introduced the league to the state of California.

The Oklahoma City Barons colors were midnight blue, copper and white (with red used for outlining) later on changed to blue, orange and white. This color palette was also used by the Edmonton Oilers between 1996 and 2011. The Barons' logo prominently features an oil derrick, symbolizing a rich tradition in the production of oil in the state of Oklahoma, and further showcasing the similarities between the cities of Edmonton and Oklahoma City.

Like the other 29 teams in the American Hockey League, the Oklahoma City Barons played in the Reebok EDGE style uniforms. The Barons' home uniform was a white jersey with a midnight blue collar and trim the white jersey , while their away uniform is a midnight blue jersey with a copper collar and trim, with the Barons logo placed on the front. These jerseys have been styled from the Edmonton Oilers' now-former away and alternate jerseys, respectively. The Barons' shoulder logos also include the Edmonton Oilers logo and the "OKC" secondary logo.

The Oklahoma City Barons' official team mascot was a mountain lion, named Derrick.[10] Derrick was officially introduced on July 27, 2010, after a lengthy "Name the Mascot" fan contest, which was held on the Barons' website.[11] Derrick's role within the Barons' organization will be interacting with fans; having his photo taken, meeting and greeting, and signing autographs during their home games. He also makes public appearances in and around Oklahoma City.

On February 19, 2012, the Barons introduced another mountain lion, named Bit, as a secondary mascot. 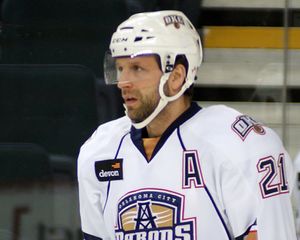 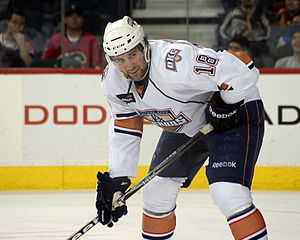