From Infogalactic: the planetary knowledge core
(Redirected from Okubo Toshimichi)
Jump to: navigation, search
In this Japanese name, the family name is Ōkubo.

Ōkubo Toshimichi (大久保 利通?, September 26, 1830 – May 14, 1878) was a Japanese statesman, a samurai of Satsuma, and one of the three great nobles who led the Meiji Restoration. He is regarded as one of the main founders of modern Japan.

Ōkubo was born in Kagoshima, Satsuma Province, (present-day Kagoshima Prefecture) to Ōkubo Juemon a low-ranking retainer of Satsuma daimyō Shimazu Nariakira. The eldest of five children, he studied at the same local school with Saigō Takamori, who was three years older. In 1846, he was given the position of aide to the domain's archivist. 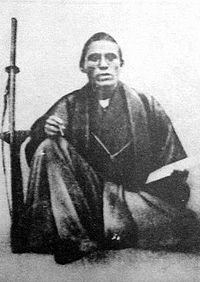 Ōkubo Toshimichi as a young samurai.

Shimazu Nariakira recognized Ōkubo's talents and appointed him to the position of tax administrator in 1858. When Nariakira died, Ōkubo joined the plot to overthrow the Tokugawa Shogunate. Unlike most Satsuma leaders, he favored the position of tōbaku (倒幕, overthrowing the Shogunate), as opposed to kōbu gattai (公武合体, marital unity of the Imperial and Tokugawa families) and hanbaku (opposition to the Shogunate) over the Sonnō jōi movement.

The Anglo-Satsuma War of 1863, along with the Richardson Affair and the September 1863 coup d'état in Kyoto convinced Ōkubo that the tobaku movement was doomed. In 1866, he met with Saigō Takamori and Chōshū Domain's Kido Takayoshi to form the secret Satcho Alliance to overthrow the Tokugawa.

On January 3, 1868, the forces of Satsuma and Chōshū seized the Kyoto Imperial Palace and proclaimed the Meiji Restoration. The triumvirate of Ōkubo, Saigō and Kido formed a provisional government. Appointed to be Home Lord, Ōkubo had a huge amount of power through his control of all local government appointments and the police force.

Initially, the new government had to rely on funds from the Tokugawa lands (which the Meiji government seized in toto). He then was able to appoint all new leaders for this land, most of the people he appointed as governors were young men, some were his friends, like Matsukata Masayoshi, and others were the rare Japanese who had gained some education in Europe or America. Okubo used the power of the Home Ministry to promote industrial development building roads, bridges, and ports, all things that the Tokugawa Shogunate had refused to do.

As Finance Minister in 1871, Ōkubo enacted a Land Tax Reform, the Haitōrei Edict, which prohibited samurai from wearing swords in public, and ended official discrimination against the outcasts. In foreign relations, he worked to secure revision of the unequal treaties and joined the Iwakura Mission on its around-the-world trip of 1871 to 1873. 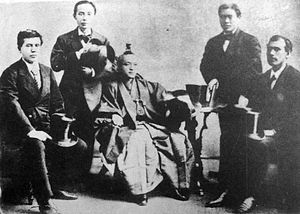 Ōkubo Toshimichi (right), as a member of the Iwakura Mission.

Realizing that Japan was not in any position to challenge the western powers in its new present state, Ōkubo returned to Japan on September 13, 1873, just in time to take a strong stand against the proposed invasion of Korea (Seikanron). He also participated in the Osaka Conference of 1875 in an attempt to bring about a reconciliation with the other members of the Meiji oligarchy.

However, he was unable to win over former colleague Saigō Takamori regarding the future direction of Japan. Saigo became convinced that some of Japan's new polices of modernization were wrong and in the Satsuma Rebellion of 1877, some Satsuma rebels under the leadership of Saigō fought against the new government's army. As Home Minister Ōkubo took command of the army and fought against his old friend Saigo.

With the defeat of rebellion's forces, Ōkubo was considered a traitor by many of the Satsuma samurai. On May 14, 1878, Okubo was assassinated by Shimada Ichirō and six Kanazawa Domain samurai while on his way to the imperial palace,[2] only a few minutes' walk from the Sakurada gate where Ii Naosuke had been assassinated 18 years earlier. 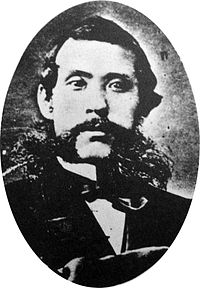 Ōkubo was one of the most influential leaders of the Meiji Restoration and the establishment of modern governmental structures. Briefly, for a time he was the most powerful man in Japan.[citation needed] A devout loyalist and nationalist, he enjoyed the respect of his colleagues and enemies alike.

Okubo also had four illegitimate children by a mistress.

In the manga/anime series Rurouni Kenshin, Ōkubo Toshimichi appears to seek Himura Kenshin's assistance in destroying the threat posed by the revolt of Shishio Makoto. Kenshin is uncertain, and Ōkubo gives him a May 14 deadline to make his decision. On his way to seek Kenshin's answer on that day, he is supposedly assassinated by Seta Sōjirō, Shishio's right-hand man, and the Ichirō clan desecrates his corpse and claim they killed him. (Watsuki makes a comparison to President of the United States, Abraham Lincoln, with Ōkubo in his notes).[5]

In Boris Akunin's novel, The Diamond Chariot, Erast Fandorin investigates the plot to assassinate Ōkubo but fails to prevent the assassination.