The park is bounded generally by the River Thames to the west, Kew Gardens to the north, and urban areas of Richmond town to the east and south. Owned by the Crown Estate, the park forms part of a larger historic landscape stretching from Richmond to Kew and across the river to Isleworth.[3] The low-lying parts of the park alongside the river constitute flood storage areas, which from time-to-time provide flood relief for areas around Richmond Lock along this stretch of the Thames.

Old Deer Park's heritage as an historic royal landscape in a favoured riverside location has become compromised over recent decades by instances of inappropriate recreational and parking development, general neglect, and insufficient control of tree planting. A long-term strategy is now being implemented in order to arrest and reverse this decline.[1]

In the mid-sixteenth century, Richmond Palace was a favourite residence of Queen Elizabeth I and in 1574 she granted "Our park of Isleworth otherwise called the Newe Parke of Richmonde" to Edward Bacon. This statement appears somewhat confusing as Isleworth Parish and Manor lie on the left "Middlesex" bank of the Thames, here on the north and west, opposite the "Surrey" bank within which Richmond is situated.

After the death of Elizabeth, at Richmond, in 1603 a hunting park was established by King James I by means of adding monastic land to the existing park and creating an enlarged area of 370 acres (1.5 km2). This then became known as The New Park of Richmond. The present name "Old Deer Park" was adopted after 1637, following the establishment by King Charles I of the much larger Richmond Park on the other side of the town.

The majority of Old Deer Park is now occupied by the Royal Mid-Surrey Golf Club, and this has been so since 1892.[4] Within the club's boundaries are two eighteen-hole courses, plus a separate area within which lies the Grade I listed Kew Observatory, established by King George III in 1769. To the south-west of the Observatory, under the fairway of the 14th hole of the outer golf course, lie the foundations of the former Carthusian Sheen Priory, founded by Henry V in 1414.[5]

Construction of the railway line westwards from Richmond Station in 1847/8 restricted the access from Richmond Green to Old Deer Park, except for one narrow bridge. Eighty-five years later a new arterial road (the "Great Chertsey Road"), complete with a high ramped approach to a new bridge over the Thames (Twickenham Bridge – built in 1933), was also constructed across the southern end of the park, close to and roughly parallel with the railway. This heightened the sense of separation between town and park – alleviating this problem is also part of the new strategy.[1]

Beside the River Thames in the park are a pair of stone obelisks. They were built in 1874 and were originally used by the Kew Observatory to observe the transit of Venus across the Sun that year. However, a legend says that they were erected in the 18th century as memorials to two men who lost their lives in a duel over a woman, who drowned herself in the river.[6]

The park was used to accommodate 5,000 of the 8,000 Scouts attending the 1st World Scout Jamboree in 1920. The public open spaces are occasionally used for circuses, funfairs and other events.

The Old Deer Park has been used a venue for cricket since at least 1867, when Richmond played a United South of England Eleven.[7] During its history, the ground has played host to a number of Middlesex Second XI and Surrey Second XI matches.[8][9][10]

Starting in the 2003 Twenty20 Cup against Kent, Middlesex have used the ground for 5 Twenty20 matches to date.[12]

In local domestic cricket, the ground is the home venue of Richmond Cricket Club.[13] 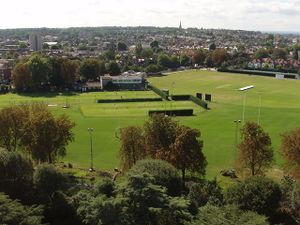 Main elements of the park