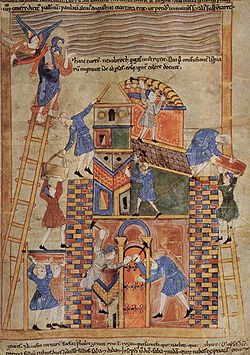 The Tower of Babel. 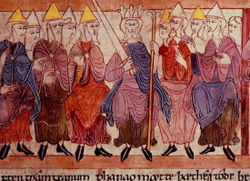 Pharaoh in court session, after passing judgment on his chief baker and chief cupbearer

The translation is retained in seven manuscripts, most of which are fragmentary. The best-known of those is a richly illuminated manuscript kept in London: British Library, Cotton MS Claudius B.iv. Another copy of the text, without lavish illustrations but including a translation of the Book of Judges (hence also called the Old English Heptateuch), is found in Oxford, Bodleian Library, Laud Misc. 509.

Claudius B.iv. was probably compiled in the second quarter of the 11th century at St Augustine's Abbey, Canterbury. It incorporates translations and a preface by Ælfric of Eynsham, while the remaining parts of the translation were carried out by anonymous authors. Peter Clemoes suggests that Byrhtferth of Ramsey was responsible for the compilation as well as for parts of the translation.

One or, more likely, several artists accompanied the narrative with 394 coloured drawings, containing about 550 scenes, many of which are unfinished, at varying stages of completion. The settings do not attempt to represent Old Testament life as anything different from that of contemporary Anglo-Saxons, and so give valuable depictions of many aspects of the Anglo-Saxon world. The extensive illustrations suggest that it was designed mainly for lay use.[2]