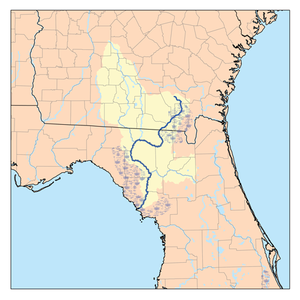 Map of the Suwannee River basin

Written for performance by the New York blackface troupe Christy's Minstrels, the song was credited to the troupe's leader, E. P. Christy, on early sheet music printings. Christy had paid Foster to be credited, which Foster himself had suggested but later came to regret.

Foster had composed most of the lyrics but was struggling to name the river of the opening line, and asked his brother to suggest one. The first suggestion was "Yazoo" (in Mississippi), which despite fitting the melody perfectly, was rejected by Foster. The second suggestion was "Pee Dee" (in South Carolina), to which Foster said, "Oh pshaw! I won't have that." His brother then consulted an atlas and called out "Suwannee!" Foster said, "That's it, exactly!" Adding it to the lyrics, he purposely misspelled it as "Swanee" to fit the melody.[2]

Foster himself never saw the Suwannee—or even visited Florida—but the popularity of the song stimulated tourism to Florida, to see the river.

Antonín Dvořák's Humoresque No. 7, written in the 1890s, is musically similar and is sometimes played along with "Old Folks at Home." The Library of Congress's National Jukebox presents a version with soprano Alma Gluck and violinist Efrem Zimbalist, Sr.[3]

Written in the first person from the perspective of a black slave (at a time when slavery was legal in half of the states of the US), the song has its narrator "longing for de old plantation,"[4] which has long drawn criticism as romanticizing slavery, although Foster himself supported the North during the American Civil War and supported abolition of slavery.[citation needed] The mid-19th-century sheet music cover, pictured here, promotes the song as an "Ethiopian melody."

A word now long reckoned to be an ethnic slur, "darkies," used in Foster's lyrics, has become such an embarrassment for singers and audiences alike that, for example, the word "brothers" was sung in place of the offensive word at the dedication of the new Florida state capitol building in 1978.[5] In general, at public performances another word like "lordy," "mama," "darling," "brothers," "children," or "dear ones" is typically substituted.

The text is written, as is usual in minstrel songs, is a cross between the dialect historically spoken by African slaves and standard American English — the former attested to as being in use as late as the 1940s, in the works of the African American folklorist from Florida, Zora Neale Hurston.[6]

In practice, the pronunciation, as written in dialect, has long been disregarded in favor of the corresponding standard American English usage, as demonstrated by the song's performances at the 1955 Florida Folk Festival.[7]

As the official state song of Florida, "Old Folks at Home" has traditionally been sung as part of a Florida governor's inauguration ceremony. However, over time, the lyrics were progressively altered to be less offensive; as Diane Roberts observed:

Florida got enlightened in 1978; we substituted "brothers" for "darkies." There were subsequent revisions. At Jeb Bush's second inauguration as governor in 2003, a young black woman gave a moving, nondialect rendition of "Old Folks at Home," except "still longing for the old plantation" came out "still longing for my old connection." Perhaps someone confused Stephen Foster's lyrics with a cell phone commercial. [8]

In his 2007 inauguration ceremony, Charlie Crist decided to not include the state song, but rather to use in its place, "The Florida Song,"[9] a composition written by a black Floridian jazz musician, Charles Atkins. Crist then encouraged state Senator Tony Hill, who was the leader of the legislature's Black Caucus, to find a new song.[10] Hill joined forces with state Representative Ed Homan and the Florida Music Educators Association to sponsor a contest for a new state song.[11]

On January 11, 2008, the song "Florida (Where the Sawgrass Meets the Sky)" was selected as the winner. The Florida Legislature considered the issue and ultimately adopted it as the state anthem while retaining "Old Folks at Home" as the state song, replacing its original lyrics with a bowdlerized version[12] approved by scholars at the Stephen Foster Memorial, University of Pittsburgh.[13] Governor Crist stated that he was not pleased by the "two songs" decision; but he signed the bill, creating a new state anthem and establishing the reworded version of the state song by statute,[1] rather than by resolution like the 1935 decision. 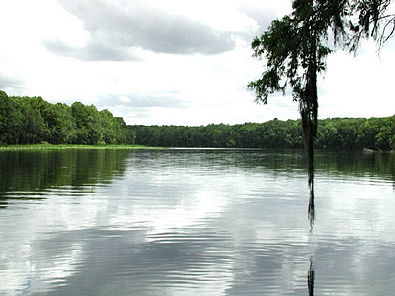 The Suwannee River in Florida 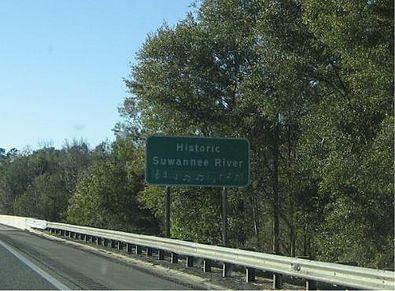 "Historic Suwannee River" sign with the first line of musical notation from "Old Folks at Home," at Interstate 75's crossing of the Suwannee

Chorus
All de world am sad and dreary,
Eb-rywhere I roam;
Oh, darkeys, how my heart grows weary,
Far from de old folks at home!

2nd verse
All round de little farm I wandered
When I was young,
Den many happy days I squandered,
Many de songs I sung.
When I was playing wid my brudder
Happy was I;
Oh, take me to my kind old mudder!
Dere let me live and die.

3rd Verse
One little hut among de bushes,
One dat I love
Still sadly to my memory rushes,
No matter where I rove.
When will I see de bees a-humming
All round de comb?
When will I hear de banjo strumming,
Down in my good old home?