Old Gorhambury House located near St Albans, Hertfordshire, England, is a ruined Elizabethan mansion, a leading and early example of the Elizabethan prodigy house. It was built in 1563-8 by Sir Nicholas Bacon, Lord Keeper, and was visited a number of times by Queen Elizabeth.[1] It is a Grade I listed building. [2] 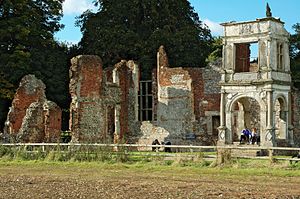 The house was built partly from bricks taken from the old Abbey buildings at St Albans, then in process of demolition following the Benedictine priory's dissolution some 25 years earlier.[3] It was used as a residence by his youngest son, the polymath (scientist, philosopher, statesman and essayist) Sir Francis Bacon, before being bequeathed by him to his former secretary, Sir Thomas Meautys, who married Anne Bacon, the great-granddaughter of Sir Nicholas.

The estate passed in 1652 to Anne's second husband Sir Harbottle Grimston, Master of the Rolls and Speaker in the Convention Parliament of 1660. The estate is owned by the Grimston family to the present day, having been passed via Harbottle Grimston's son Samuel, who died childless in 1700, to his great-nephew William Luckyn, who in turn became the first Viscount Grimston in 1719.[4] The surviving remains include a two-storey porch, chapel and clock tower. The site is maintained by English Heritage and is free to visit.[1]

In the years 1777-84, the current Palladian-style Gorhambury House was built nearby. Designed by Sir Robert Taylor and commissioned by James Bucknall Grimston, 3rd Viscount Grimston, it replaced Old Gorhambury House, which was left to fall into ruin. It remains the home of the Earl of Verulam.[5]

The current house is a member of Historic Houses Association and is open for tours at certain times.[6]