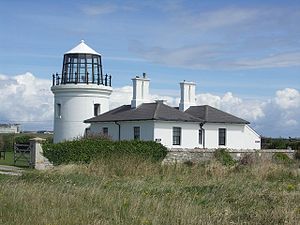 The Old Higher Lighthouse in 2007.

The surrounding coast of Portland, namely Portland Bill and Chesil Beach, have been notorious for the many vessels that became shipwrecked in the area over the centuries.[3][4] After years of local petitions to Trinity House, the organisation saw a lighthouse at the Bill as being necessary. George I granted Trinity House's patent in 1716.[3][4][5]

Two lighthouses were built at Portland Bill - one at Branscombe Hill, and the other on lower land.[4] The two lighthouses shone out for the first time on 29 September 1716.[3] In 1788 Trinity House had Argand lamps installed within the higher lighthouse - the first lighthouse in England to be fitted with them.[6] In 1869 they had both lighthouses rebuilt.[3][6]

At the turn of the 20th-century, Trinity House put forward plans for a new lighthouse at Bill Point, to replace both current lighthouses.[6][3][7] The new lighthouse was completed in 1905,[4] leaving the original two lighthouses to be auctioned.[4][8]

In 1923 the lighthouse was purchased by the doctor, pioneer of birth control and Portland Museum founder Marie Stopes as a summer residence.[9] During World War II, the Royal Observer Corps used the lighthouse tower as a lookout.[10] During the early 1960s the lighthouse was run as a restaurant.[11]

The property's latest owners bought the lighthouse in 1981 and refurbished the entire property. The lighthouse's paraffin store was converted into a holiday let. With a total of four cottages within its grounds, both the Branscombe Lodge Cottage and Stopes Cottage remain available as holiday lets.[12]