From Infogalactic: the planetary knowledge core
Jump to: navigation, search
For an outline of this language's history, see Old Hungarian language.

The Hungarians settled the Carpathian Basin in 895. After the establishment of the Christian Hungarian kingdom, the old writing was partly forced out of use and the Latin alphabet was adopted. However, among some professions (e.g. shepherds used a "rovás-stick" to officially track the number of animals) and in Transylvania, the script has remained in use by the Székely Magyars, giving its Hungarian name székely rovásírás. The writing could also be found in churches like the one in Atid.

The Old Hungarian script has also been described as "runic" or "runiform" because it is superficially reminiscent of the Germanic runic alphabet.[2] Its English name in the ISO 15924 standard is Old Hungarian (Hungarian Runic).[3][4]

No exact date or origin is known for the script.

Proto-Rovas from 5300 BC can be seen at the Tărtăria tablets according to Klára Friedrich. [7]

Attila Grandpierre describes the incision of an axe socket found in the plains of Campagna, near Rome, that was made around 1000 BC.[8]

András Róna-Tas derives Old Hungarian from the Old Turkic script,[9] itself recorded in inscriptions dating from c. AD 720. The origins of the Turkic scripts are uncertain. The scripts may derived from Asian scripts such as the Pahlavi and Sogdian alphabets, or possibly from Kharosthi, all of which are in turn remotely derived from the Aramaic script.[10] Or alternatively, according to some opinions, ancient Turkic runes descend from primaeval Turkic graphic logograms.[11] 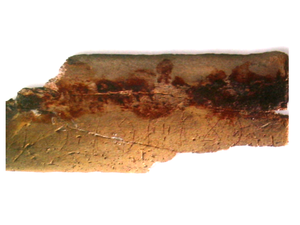 The inscription found in Homokmégy-Halom. From the 10th century

Speakers of Proto-Hungarian would have come into contact with Turkic peoples during the 7th or 8th century, in the context of the Turkic expansion, as is also evidenced by numerous Turkic loanwords in Proto-Hungarian.

All the letters but one for sounds which were shared by Turkic and Ancient Hungarian can be related to their Old Turkic counterparts. Most of the missing characters were derived by script internal extensions, rather than borrowings, but a small number of characters seem to derive from Greek, such as

The modern Hungarian term for this script (coined in the 19th century) rovás derives from the verb róni ('to score') which is derived from old Uralic, general Hungarian terminology describing the technique of writing (írni 'to write', betű 'letter', bicska 'knife (also: for carving letters)') derive from Turkic,[13] which further supports transmission via Turkic alphabets.

Epigraphic evidence for the use of the Old Hungarian script in medieval Hungary dates to the 10th century, for example, from Homokmégy[14] The latter inscription was found on a fragment of a quiver made of bone. Although there have been several attempts to interpret it, the meaning of it is still unclear.

In 1000, with the coronation of Stephen I of Hungary, Hungary (previously an alliance of mostly nomadic tribes) became a Kingdom. The Latin alphabet was adopted as official script, however Old Hungarian continued to be used in the vernacular.

The runic script was first mentioned in the 13th century Chronicle of Simon of Kéza,[15] where he stated that the Székelys may use the script of the blaks[16] (Simon of Kéza: Blacki; Anonymus: Blacus, Blachi, Blacci), which is not to be confused with the illiterate vlach [17][18] people of humble origins.

The Old Hungarian script became part of folk art in several areas during this period.[citation needed] In Royal Hungary, Old Hungarian script was used less, although there are relics from this territory, too. There is another copy – similar to the Nikolsburg Alphabet – of the Old Hungarian alphabet, dated 1609. The inscription from Énlaka, dated 1668, is an example of the "folk art use".

Hungarian script[19] was first described in late Humanist/Baroque scholarship, in 1598 by János Telegdi in his primer, "Rudimenta Priscae Hunnorum Linguae", where he presents his understanding of the script. It also contains Hungarian texts written with runes, for example, the Lord's Prayer.

In the 19th century scholars began to research the rules and the other features of the Old Hungarian script. From this time the name rovásírás 'runic writing' began to enter again into the popular consciousness in Hungary, and script historians in other countries began to use the terms "Old Hungarian", "Altungarisch", and so on. Because the Old Hungarian script had been replaced by Latin, linguistic researchers in the 20th century had to reconstruct the alphabet from historic sources. Gyula Sebestyén, ethnographer, folklorist and Gyula (Julius) Németh, philologist, linguist, turcologist did the lion's share of this work. Sebestyén's publications, Rovás és rovásírás (Runes and runic writing, Budapest, 1909) and A magyar rovásírás hiteles emlékei (The authentic relics of Hungarian runic writing, Budapest, 1915) contain valuable information on the topic. 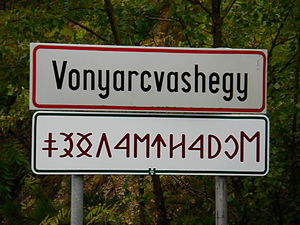 Welcome sign in Latin and in Old Hungarian script for the town of Vonyarcvashegy, Hungary

Beginning with Adorján Magyar in 1915, the script has been promulgated as a means for writing modern Hungarian. These groups approached the question of representation of the vowels of modern Hungarian in different ways. Adorján Magyar made use of characters to distinguish a/á and e/é but did not distinguish the other vowels by length. A school led by Sándor Forrai from 1974 onward did also distinguish i/í, o/ó, ö/ő, u/ú, and ü/ű. The revival has become part of significant ideological nationalist subculture not only in Hungary (largely centered in Budapest), but also amongst the Hungarian diaspora, particularly in the United States and Canada.[20]

Old Hungarian has seen other usages in the modern period, sometimes in association with or referencing Hungarian neopaganism,[citation needed] similar to the way in which Norse neopagans have taken up the Germanic runes, and Celtic neopagans have taken up Ogham script for various purposes. The use of the script sometimes has a political undertone, as they can be found from time to time in graffiti with a variety of content.[20]

The runic alphabet included 42 letters. As in the Old Turkic script, some consonants had two forms, one to be used with back vowels (a, á, o, ó, u, ú) and another for front vowels (e, é, i, í, ö, ő, ü, ű). The names of the consonants are always pronounced with a vowel. In the old alphabet, the consonant-vowel order is reversed, unlike today's pronunciation. This is because the oldest inscriptions lacked vowels and were rarely written down, just like other ancient languages' consonant-writing systems (Arabic, Hebrew, Aramaic, etc.). The alphabet did not contain letters for the phonemes dz and dzs of modern Hungarian, since these are relatively recent developments in the language's history. Nor did it have letters for Latin q, w, x and y. Modern scholars have added symbols for the new letters, but the Unicode standard has not accepted them.

For more information about the transliteration's pronunciation, see Hungarian alphabet.

The Hungarian runes also include some non-alphabetical runes which are not ligatures but separate signs. These are called capita dictionum. Further research is needed to define their origin and traditional usage. Some examples:

The numbers are almost the same as the Roman, Etruscan, and Chuvash numerals. Numbers of livestock were carved on tally sticks and the sticks were then cut in two lengthwise to avoid later disputes.

After many proposals[22] Old Hungarian was added to the Unicode Standard in June, 2015 with the release of version 8.0.

A set of closely related 8-bit code pages exist, devised in the 1990s by Gabor Hosszú. These were mapped to Latin-1 or Latin-2 character set fonts. After installing one of them and applying their formatting to the document – because of the lack of capital letters – runic characters could be entered in the following way: those letters which are unique letters in today's Hungarian orthography are virtually lowercase ones, and can be written by simply pressing the specific key; and since the modern digraphs equal to separate rovás letters, they were encoded as 'uppercase' letters, i.e. in the space originally restricted for capitals. Thus, typing a lowercase g will produce the rovas character for the sound marked with Latin script g, but entering an uppercase G will amount to a rovás sign equivalent to a digraph gy in Latin-based Hungarian orthography.