The Old Kingdom is the name given to the period in the 3rd millennium BC when Egypt attained its first continuous peak of civilization – the first of three so-called "Kingdom" periods, which mark the high points of civilization in the lower Nile Valley (the others being Middle Kingdom and the New Kingdom).

The term itself was coined by eighteenth-century historians and the distinction between the Old Kingdom and the Early Dynastic Period is not one which would have been recognized by Ancient Egyptians. Not only was the last king of the Early Dynastic Period related to the first two kings of the Old Kingdom, but the 'capital', the royal residence, remained at Ineb-Hedg, the Ancient Egyptian name for Memphis. The basic justification for a separation between the two periods is the revolutionary change in architecture accompanied by the effects on Egyptian society and economy of large-scale building projects.[1]

The Old Kingdom is most commonly regarded as the period from the Third Dynasty through to the Sixth Dynasty (2686–2181 BC). Many Egyptologists also include the Memphite Seventh and Eighth Dynasties in the Old Kingdom as a continuation of the administration centralized at Memphis. While the Old Kingdom was a period of internal security and prosperity, it was followed by a period of disunity and relative cultural decline referred to by Egyptologists as the First Intermediate Period.[2] During the Old Kingdom, the king of Egypt (not called the Pharaoh until the New Kingdom) became a living god who ruled absolutely and could demand the services and wealth of his subjects.[3] The numerous references to the Old Kingdom kings as pharaohs in this article stems from the ubiquitous use of the term "pharaoh" to describe any and all Ancient Egyptian Kings.

Under King Djoser, the first king of the Third Dynasty of the Old Kingdom, the royal capital of Egypt was moved to Memphis, where Djoser established his court. A new era of building was initiated at Saqqara under his reign. King Djoser's architect, Imhotep is credited with the development of building with stone and with the conception of the new architectural form—the Step Pyramid.[3] Indeed, the Old Kingdom is perhaps best known for the large number of pyramids constructed at this time as pharaonic burial places. For this reason, the Old Kingdom is frequently referred to as "the Age of the Pyramids." 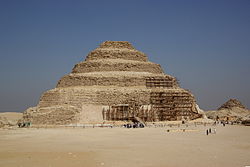 The Pyramid of Djoser at Saqqara.

The first king of the Old Kingdom was Djoser (sometime between 2691 and 2625 BC) of the third dynasty, who ordered the construction of a pyramid (the Step Pyramid) in Memphis' necropolis, Saqqara. An important person during the reign of Djoser was his vizier, Imhotep. 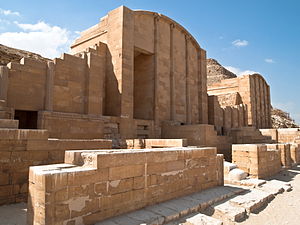 Temple of Djoser at Saqqara

It was in this era that formerly independent ancient Egyptian states became known as nomes, under the rule of the pharaoh. The former rulers were forced to assume the role of governors or otherwise work in tax collection. Egyptians in this era worshipped their pharaoh as a god, believing that he ensured the annual flooding of the Nile that was necessary for their crops. Egyptian views on the nature of time during this period held that the universe worked in cycles, and the Pharaoh on earth worked to ensure the stability of those cycles. They also perceived themselves as a specially selected people.[4] 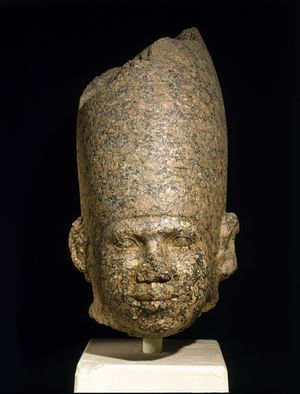 Head of a King, ca. 2650-2600 B.C., Brooklyn Museum; The earliest representations of Egyptian Kings are on a small scale. Not until Dynasty III were statues made which show the ruler life-size; this forceful head wearing the tall crown of Upper Egypt even surpasses human scale, both in measurements and in its aim to depict the godlike power and strength of the Pharaoh.[5] 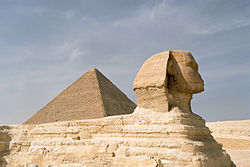 The Great Sphinx of Giza in front of the Great Pyramid of Giza.

The Old Kingdom and its royal power reached a zenith under the Fourth Dynasty (2613–2494 BC), which began with Sneferu (2613–2589 BC). Using more stones than any other pharaoh, he built three pyramids: a now collapsed pyramid in Meidum, the Bent Pyramid at Dahshur, and the Red Pyramid, at North Dahshur. However, the full development of the pyramid style of building was reached not at Saqqara, but during the building of the "great pyramids" at Giza.[6]

Sneferu was succeeded by his son, Khufu (2589–2566 BC) who built the Great Pyramid of Giza. After Khufu's death his sons Djedefra (2566–2558 BC) and Khafra (2558–2532 BC) may have quarreled. The latter built the second pyramid and (in traditional thinking) the Sphinx in Giza. Recent reexamination of evidence has led Egyptologist Vassil Dobrev to propose that the Sphinx had been built by Djedefra as a monument to his father Khufu.[7] Alternatively, the Sphinx has been proposed to be the work of Khafra and Khufu himself.

There were military expeditions into Canaan and Nubia, with Egyptian influence reaching up the Nile into what is today the Sudan.[8] The later kings of the Fourth Dynasty were king Menkaure (2532–2504 BC), who built the smallest pyramid in Giza, Shepseskaf (2504–2498 BC) and, perhaps, Djedefptah (2498–2496 BC). 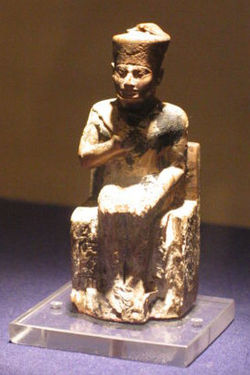 Khufu, the builder of the Great Pyramid at Giza. 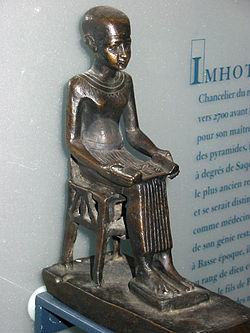 Userkaf was succeeded by his son Sahure (2487–2475 BC) who commanded an expedition to Punt. Sahure was in turn succeeded by Neferirkare Kakai (2475–2455 BC) who was either Sahure's son or his brother, in which case he might have usurped the throne at the expense of Prince Netjerirenre.[9] He was followed by two shadowy short-lived kings Neferefre (2455–2453 BC) and Shepseskare, the latter being possibly a son of Sahure.[10] Shepseskare was deposed by Neferefre's brother Nyuserre Ini (2445–2421 BC).

Egypt's expanding interests in trade goods such as ebony, incense such as myrrh and frankincense, gold, copper and other useful metals inspired the ancient Egyptians to build suitable ships for navigation of the open sea. They traded with Lebanon for cedar and traveled the length of the Red Sea to the Kingdom of Punt, which was possibly modern day Somalia, for ebony, ivory and aromatic resins. Ship builders of that era did not use pegs (treenails) or metal fasteners, but relied on rope to keep their ships assembled. Planks and the superstructure were tightly tied and bound together.

During the sixth dynasty (2345–2181 BC) the power of pharaoh gradually weakened in favor of powerful nomarchs (regional governors). These no longer belonged to the royal family and their charge became hereditary, thus creating local dynasties largely independent from the central authority of the pharaoh. Internal disorders set in during the incredibly long reign of Pepi II (2278–2184 BC) towards the end of the dynasty. His death, certainly well past that of his intended heirs, might have created succession struggles and the country slipped into civil wars mere decades after the close of Pepi II's reign.

The final blow was a severe drought in the region that resulted in a drastic drop in precipitation between 2200 and 2150 BCE, which in turn prevented the normal flooding of the Nile.[11] The result was the collapse of the Old Kingdom followed by decades of famine and strife. An important inscription on the tomb of Ankhtifi, a nomarch during the early First Intermediate Period, describes the pitiful state of the country when famine stalked the land.

Egypt's Old Kingdom (Dynasties 3–6, ca. 2649–2150 BC) was one of the most dynamic periods in the development of Egyptian art. During this period, artists learned to express their culture's worldview, creating for the first time images and forms that endured for generations. Architects and masons mastered the techniques necessary to build monumental structures in stone.[12]

Sculptors created the earliest portraits of individuals and the first lifesize statues in wood, copper, and stone. They perfected the art of carving intricate relief decoration and, through keen observation of the natural world, produced detailed images of animals, plants, and even landscapes, recording the essential elements of their world for eternity in scenes painted and carved on the walls of temples and tombs.[12]

These images and structures had two principal functions: to ensure an ordered existence and to defeat death by preserving life into the next world. To these ends, over a period of time, Egyptian artists adopted a limited repertoire of standard types and established a formal artistic canon that would define Egyptian art for more than 3,000 years, while remaining flexible enough to allow for subtle variation and innovation. Although much of their artistic effort was centered on preserving life after death, Egyptians also surrounded themselves with objects to enhance their lives in this world, producing elegant jewelry, finely carved and inlaid furniture, and cosmetic vessels and implements made from a wide range of materials.