The Old Uyghur language (simplified Chinese: 回鹘语; traditional Chinese: 回鶻語; pinyin: Huíhú yǔ) was a Turkic language which was spoken in the Kingdom of Qocho from the 9th–14th centuries and in Gansu. 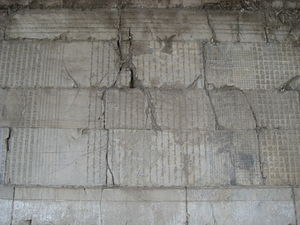 Uyghur inscription on the east interior wall of the Cloud Platform at Juyong Pass. 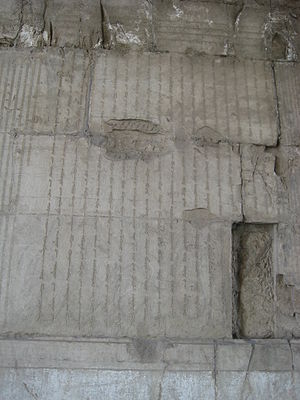 Uyghur inscription on the west interior wall of the Cloud Platform at Juyong Pass.

The Old Uyghur language evolved from Old Turkic after the Uyghur Khaganate broke up and remnants of it migrated to Gansu and Turfan and Hami in the 9th century. The Uyghurs in Turfan and Qomul founded the Kingdom of Qocho and adopted Manichaeism and Buddhism as their religions, while those in Gansu first founded the Gansu Uyghur Kingdom (Ganzhou Uyghur Kingdom) and then became subjects of the Western Xia, and their descendants are the Yugur.

The Kingdom of Qocho survived as a client state of the Mongol Empire but was conquered by the Muslim Chagatai Khanate which conquered Turfan and Qomul and Islamisized the region. The Old Uyghur language then became extinct in Turfan and Qomul.

The Uyghur language is not descended from Old Uyghur; rather, it is a descendant of the Karluk languages spoken by the Kara-Khanid Khanate,[3] in particular the Xākānī language described by Mahmud al-Kashgari while Western Yugur is considered to be the true descendant of Old Uyghur, and is also called "Neo-Uygur" according to Gerard Clauson.[4] According to Frederik Coene and Martina Roos, Modern Uyghur and Western Yugur belong to entirely different branches of the Turkic language family, respectively southeastern (Karluk) and northeastern (Siberian Turkic).[5][6]

Old Uyghur had an anticipating counting system and a copula dro, which is passed on to Western Yugur.[7]

Much of Old Uyghur literature is religious texts regarding Manichaeism and Buddhism,[8] with examples found among the Dunhuang manuscripts. Multilingual inscriptions including Old Uyghur can be found at the Cloud Platform at Juyong Pass and the Stele of Sulaiman.

Old Uyghur was written in the Old Uyghur alphabet which was derived from the Sogdian alphabet.