The Old Vic is a theatre located just south-east of Waterloo Station in London on the corner of The Cut and Waterloo Road. Established in 1818 as the Royal Coburg Theatre, it was taken over by Emma Cons in 1880 when it was known formally as the Royal Victoria Hall. In 1898, a niece of Cons, Lilian Baylis assumed management and began a series of Shakespeare productions in 1914. The building was damaged in 1940 during air raids and it became a Grade II* listed building in 1951 after it reopened.[2]

It was also the name of a repertory company that was based at the theatre and formed the core of the National Theatre of Great Britain on its formation in 1963, under Laurence Olivier. The National Theatre remained at the Old Vic until new premises were constructed on the South Bank, opening in 1976. The Old Vic then became the home of Prospect Theatre Company, at that time a highly successful touring company which staged such acclaimed productions as Derek Jacobi's Hamlet. However, with the withdrawal of funding for the company by the Arts Council of Great Britain in 1980 for breaching its touring obligations, Prospect disbanded in 1981. The theatre underwent complete refurbishment in 1985. In 2003, Kevin Spacey was appointed as new artistic director of the Old Vic Theatre Company which received considerable media attention.[3] In 2015, Matthew Warchus was appointed the new Artistic Director. 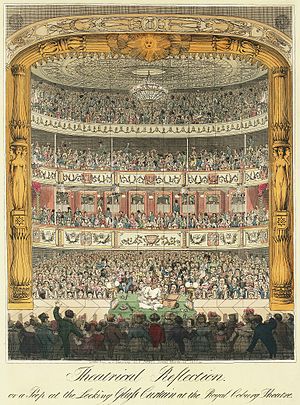 The theatre was founded in 1818 by James King and Daniel Dunn (formerly managers of the Surrey Theatre in Bermondsey), and John Thomas Serres, then Marine painter to the King who managed to secure the formal patronage of Princess Charlotte and her husband Prince Leopold of Saxe-Coburg naming the theatre the Royal Coburg Theatre. The theatre was a "minor" theatre (as opposed to one of the two patent theatres) and was thus technically forbidden to show serious drama. Nevertheless, when the theatre passed to George Bolwell Davidge in 1824 he succeeded in bringing legendary actor Edmund Kean south of the river to play six Shakespeare plays in six nights. The theatre's role in bringing high art to the masses was confirmed when Kean addressed the audience during his curtain call saying "I have never acted to such a set of ignorant, unmitigated brutes as I see before me." More popular staples in the repertoire were "sensational and violent" melodramas demonstrating the evils of drink, "churned out by the house dramatist", confirmed teetotaller Douglas Jerrold.[4]

When Davidge left to take over the Surrey Theatre in 1833 it was bought by Daniel Egerton and William Abbot who tried to capitalise on the abolition of the legal distinction between patent and minor theatres, enacted in Parliament earlier that year.[5] On 1 July 1834 the theatre was renamed the Royal Victoria Theatre, under the "protection and patronage" of Victoria, Duchess of Kent, mother to Princess Victoria, the 14-year-old heir presumptive. The duchess and the princess visited only once, on 14 November of that year, but enjoyed the performance, of light opera and dance, in the "pretty...clean and comfortable" theatre. The single visit scarcely justified the "Old Vic" its later billing as "Queen Victoria's Own Theayter".[5][6] In 1880, under the ownership of Emma Cons to whom there are plaques outside and inside the theatre, it became The Royal Victoria Hall And Coffee Tavern and was run on "strict temperance lines"; by this time it was already known as the "Old Vic".[7] The penny lectures given in the hall led to the foundation of Morley College,[8] an adult education college, that moved to its own premises nearby, in the 1920s. 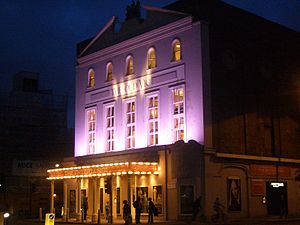 The theatre at night

With Emma Cons's death in 1912 the theatre passed to her niece Lilian Baylis, who emphasised the Shakespearean repertoire. The Old Vic Company was established in 1929, led by Sir John Gielgud. Between 1925 and 1931, Lilian Baylis championed the re-building of the then-derelict Sadler's Wells Theatre, and established a ballet company under the direction of Dame Ninette de Valois. For a few years the drama and ballet companies rotated between the two theatres, with the ballet becoming permanently based at Sadler's Wells in 1935.

The Old Vic was damaged badly during the Blitz, and the war-depleted company spent all its time touring, based in Burnley, Lancashire at the Victoria Theatre during the years 1940 to 1943. In 1944, the company was re-established in London with Ralph Richardson and Laurence Olivier as its stars, performing mainly at the New Theatre (now the Noël Coward Theatre) until the Old Vic was ready to re-open in 1950. In 1946, an offshoot of the company was established in Bristol as the Bristol Old Vic.

In 1963, the Old Vic company was dissolved and the new National Theatre Company, under the artistic direction of Lord Olivier, was based at the Old Vic until its own building was opened on the South Bank near Waterloo Bridge in 1976. 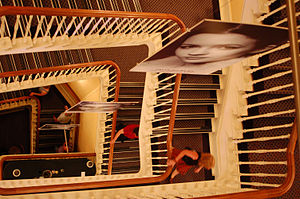 Staircase of the Old Vic

In July 1974 the Old Vic presented a rock concert for the first time. National Theatre director Sir Peter Hall arranged for the progressive folk-rock band Gryphon to première Midnight Mushrumps, the fantasia inspired by Hall's own 1974 Old Vic production of The Tempest starring John Gielgud for which Gryphon had supplied the music.

For two years prior to the departure of the National Theatre company, Toby Robertson, director of the Prospect Theatre Company, sustained a campaign that the Old Vic should make Prospect its resident company.[9] For the Old Vic, Robertson's overtures proved increasingly hard to resist in the face of poor box office returns achieved by productions staged by other visiting companies; against this, Prospect staged a highly successful season which opened in May 1977, including Hamlet with Derek Jacobi, Antony and Cleopatra with Alec McCowen and Dorothy Tutin; and Saint Joan with Eileen Atkins.[10][11] In July the Governors of The Old Vic announced "a marriage that was all but a merger" between the Vic and Prospect. In September Toby Robertson, director of Prospect, was asked to take artistic control of The Old Vic, and Christopher Richards, general manager of The Old Vic, became general manager of Prospect.[12]

One major problem, though, was the terms of Prospect's funding by the Arts Council of Great Britain: this was on the basis of it being a touring company, and the Council - already funding the National Theatre and the Royal Shakespeare Company in London - could not accept a case for a third major company in the capital and repeatedly refused requests to fund any London seasons staged by Prospect. Therefore, any London-based productions would have to succeed financially without Arts Council support. Prospect's first season at the Old Vic recouped its costs but left no surplus to fund future productions. Further stagings by visiting companies were box office failures and stretched the theatre's finances to breaking point.[13] Yet Prospect continued to draw audiences to the Old Vic where other companies failed. In December 1978, the governors of the Old Vic agreed to a five-year contract with Prospect, announcing to the press on 23 April that henceforth they would be styled "Prospect Productions Ltd., trading as the Old Vic Company".[14] Unfortunately Prospect's touring commitments kept the company out of the theatre for the first half of 1979, leaving the theatre to sink further into debt. The company returned in July with Jacobi's Hamlet (toured afterwards to Denmark, Australia and China, the first English theatre company to tour that country),[15] followed by Romeo and Juliet, and The Government Inspector with Ian Richardson.[14] The following season, however, proved controversial: the proposed programming, including the double bill of The Padlock and Miss in Her Teens, to mark the bicentenary of David Garrick's death, and a revival of What the Butler Saw, were deemed by the Arts Council unsuitable for touring repertory.[14] An internal report by Prospect now questioned "whether Prospect can any longer satisfy the triple task of filling the Vic, of satisfying the Arts Council Director of Touring's requirements for product of a certain familiar sort, and of realising the vision of Toby Robertson".[16]

Robertson was in effect fired as artistic director in 1980 while he was abroad with the company in China, Timothy West replacing him.[17] The following season, West's first as Robertson's successor, saw Macbeth with Peter O'Toole, The Merchant of Venice with West as Shylock, and a gala performance presented to the Queen Mother to celebrate her eightieth birthday.[18] On 22 December 1980, four days after the gala performance, the Arts Council withdrew its funding from the company, sealing its inevitable demise.[15][18] The company gave a final season at the Old Vic in 1981, staging The Merchant of Venice, then gave a final tour of Europe, giving its last performance in Rome on 14 June before disbanding.[18]

The Old Vic was significantly restored under the ownership of Toronto department-store entrepreneur 'Honest Ed' Mirvish in 1985. In 1987, his son David Mirvish installed Jonathan Miller as artistic director of the Old Vic and the theatre enjoyed several critical successes – including an Olivier Award for a production of the musical Candide, but, unfortunately, three straight years of financial loss. In 1990, Mirvish terminated Miller's contract over budgetary issues, earning much negative criticism in the British press.

In 1997, Mirvish appointed Sir Peter Hall as artistic director and, again, enjoyed critical acclaim with such productions as The Master Builder with Alan Bates and Waiting for Godot with Ben Kingsley, but continuing financial loss. Within a year of the appointment, Mirvish terminated Hall's contract – again to much negative comment in the press - and put the Old Vic up for sale. In 1998, the building was bought by a new charitable trust, The Old Vic Theatre Trust 2000. In 2000, the production company Criterion Productions was renamed Old Vic Productions plc, though relatively few of its productions are at the Old Vic theatre.

In 2003, actor Kevin Spacey was appointed as new artistic director of the Old Vic Theatre Company receiving considerable media attention. Spacey said he wanted to inject new life into the British theatre industry, and bring British and American theatrical talent to the stage. He appears in one or two shows per season, and performs some directorial duties on other shows.[19] In 2015, Spacey was replaced by Matthew Warchus as artistic director.[20] His debut season opened on 1 September with Warchus's production of a new play about education, Future Conditional by Tamsin Oglesby. Future plans include the world premiere of the musical Groundhog Day,[21] which will also be directed by Warchus.[22]

In February 2010, The Old Vic acquired a new sister performance space beneath London Waterloo station; a series of cavernous tunnels formerly owned by British Rail. Now operating under the artistic direction of Hamish Jenkinson, this venue plays host to productions, performances and installations. The Old Vic Tunnels was presented the Big Society Award by David Cameron in 2011.[23]

There was an Artist in Residence Scheme with a resident photographer, graffiti artist, designer, and filmmaker. In 2011 The Old Vic appointed German film director Grigorij Richters and producer Alex Souabni as their filmmakers-in-residence.

Old Vic New Voices is the education, community and emerging talent programme of The Old Vic. It aims to discover and nurture emerging actors, writers, producers and directors and draw more diverse audiences into the theatre. The director is Alexander Ferris. A parallel project, OVNV New York, has been set up in New York.[24]