Oleg of Novgorod (Old East Slavic: Олег, Old Norse: Helgi) was a Varangian prince (or konung) who ruled all or part of the Rus' people during the early 10th century.

He is credited with moving the capital of Rus' from Novgorod the Great to Kiev and, in doing so, he laid the foundation of the powerful state of Kievan Rus'. He also launched at least one attack on Constantinople, capital of the Byzantine Empire. According to East Slavic chronicles, Oleg was supreme ruler of the Rus' from 882 to 912.

This traditional dating has been challenged by some historians, who point out that it is inconsistent with such other sources as the Schechter Letter, which mentions the activities of certain khagan HLGW of Rus' as late the 940s, during the reign of Byzantine Emperor Romanus I. The nature of Oleg's relationship with the Rurikid ruling family of the Rus', and specifically with his successor Igor of Kiev, is a matter of much controversy among historians.

Oleg of the Russian chronicles 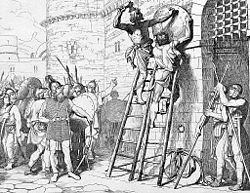 Fyodor Bruni. Oleg Has His Shield Fixed to the Gates of Constantinople.

According to the Primary Chronicle, Oleg was a relative (likely brother-in-law) of the first ruler, Rurik, and was entrusted by Rurik to take care of both his kingdom and his young son Igor. Oleg gradually took control of the Dnieper cities, captured Kiev (previously held by the Varangian warlords, Askold and Dir) and finally moved his capital from Novgorod there. The new capital was a convenient place to launch a raid against Tsargrad (Constantinople) in 911.

According to the chronicle, the Byzantines attempted to poison Oleg, but the Rus' leader demonstrated his oracular powers by refusing to drink the cup of poisoned wine. Having fixed his shield to the gate of the imperial capital, Oleg won a favourable trade treaty, which eventually was of great benefit to both nations. Although Byzantine sources did not record these hostilities, the text of the treaty survives in the Chronicle. 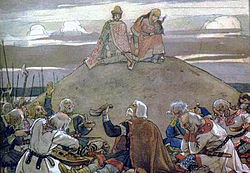 Viktor Vasnetsov. Oleg being mourned by his warriors (1899).

Scholars have contrasted this dating scheme with the "epic" reigns of roughly thirty-three years for both Oleg and Igor in the Primary Chronicle.[2] The Primary Chronicle and other Kievan sources place Oleg's grave in Kiev, while Novgorodian sources identify a funerary barrow in Ladoga as Oleg's final resting place.[3]

Legend of the death of Oleg the Prophet 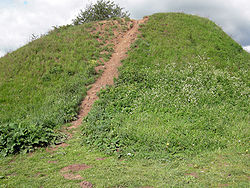 The reputed burial mound for Oleg of Novgorod; Volkhov River near Staraya Ladoga.

In the Primary Chronicle, Oleg is known as the Prophet (вещий), an epithet alluding to the sacred meaning of his Norse name ("priest"). According to the legend, romanticised by Alexander Pushkin in his ballad "The Song of the Wise Oleg,"[4] it was prophesied by the pagan priests (volkhvs) that Oleg would take death from his stallion.

To defy the prophecies, Oleg sent the horse away. Many years later he asked where his horse was, and was told it had died. He asked to see the remains and was taken to the place where the bones lay. When he touched the horse's skull with his boot a snake slithered from the skull and bit him. Oleg died, thus fulfilling the prophecy.

Oleg's death has been interpreted as a distorted variant of the threefold death theme in Indo-European myth and legend, with prophecy, the snake and the horse representing the three functions: the prophecy is associated with sovereignty, the horse with warriors, and the serpent with reproduction.[5]

In Scandinavian traditions, this legend lived on in the saga of Orvar-Odd.

Oleg of the Schechter Letter

According to the Primary Chronicle, Oleg died in 912 and his successor, Igor of Kiev, ruled from then until his assassination in 945. The Schechter Letter,[6] a document written by a Jewish Khazar, a contemporary of Romanus I Lecapenus, describes the activities of a Rus' warlord named HLGW (Hebrew: הלגו), usually transcribed as "Helgu".[7] For years many scholars disregarded or discounted the Schechter Letter account, which referred to Helgu (often interpreted as Oleg) as late as the 940s.[8]

Recently, however, scholars such as David Christian and Constantine Zuckerman have suggested that the Schechter Letter's account is corroborated by various other Russian chronicles, and suggests a struggle within the early Rus' polity between factions loyal to Oleg and to the Rurikid Igor, a struggle that Oleg ultimately lost.[9] Zuckerman posited that the early chronology of the Rus' had to be re-determined in light of these sources. Among Zuckerman's beliefs and those of others who have analyzed these sources are that the Khazars did not lose Kiev until the early 10th century (rather than 882, the traditional date[10]), that Igor was not Rurik's son but rather a more distant descendant, and that Oleg did not immediately follow Rurik, but rather that there is a lost generation between the legendary Varangian lord and his documented successors.[11]

Of particular interest is the fact that the Schechter Letter account of Oleg's death (namely, that he fled to and raided FRS, tentatively identified with Persia,[12] and was slain there) bears remarkable parallels to the account of Arab historians such as Ibn Miskawayh, who described a similar Rus' attack on the Muslim state of Arran in the year 944/5.[13]

Attempts to reconcile the accounts 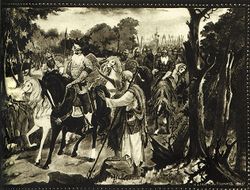 In contrast to Zuckerman's version, the Primary Chronicle and the later Kiev Chronicle place Oleg's grave in Kiev, where it could be seen at the time of the compilation of these documents. Furthermore, scholars have pointed out that if Oleg succeeded Rurik in 879 (as the East Slavic chronicles assert), he could hardly have been active almost 70 years later, unless he had a life-span otherwise unheard of in medieval annals. To solve these difficulties, it has been proposed that the pagan monarch-priests of Rus' used the hereditary title of helgu, standing for "holy" in the Norse language, and that Igor and others held this title.[14]

It has also been suggested that Helgu-Oleg who waged war in the 940s was distinct from both of Rurik's successors. He could have been one of the "fair and great princes" recorded in the Russo-Byzantine treaties of 911 and 944 or one of the "archons of Rus" mentioned in De administrando imperio.[15] Regrettably, the Primary Chronicle does not specify the relations between minor Rurikid princes active during the period, although the names Rurik, Oleg and Igor were recorded among the late-10th-century and 11th-century Rurikids.

Georgy Vernadsky even identified the Oleg of the Schechter Letter with Igor's otherwise anonymous eldest son, whose widow Predslava is mentioned in the Russo-Byzantine treaty of 944.[16] Alternatively, V. Ya. Petrukhin speculated that Helgu-Oleg of the 940s was one of the vernacular princes of Chernigov, whose ruling dynasty maintained especially close contacts with Khazaria, as the findings at the Black Grave, a large royal kurgan excavated near Chernigov, seem to testify.[17] However, the academic mainstream has not endorsed either of these theories.