Born in Burwell, Cambridgeshire, he was educated at The King's School, Ely.[1]

Oliver was first introduced to motorsport from an early age when his father Carl was competing in Formula Ford 1600. Keen to try it for himself, and at just six years old, Oliver enjoyed his first motorcross competition, albeit then two wheels not four.

At the age of eight, Oliver made the transition to race karts. During his 10 years in karts, he achieved notable success in British and European events, as well as in World Karting as one of Tony Kart's Works driver.

Oliver moved from European Karting when he was 18 to the highly competitive British single seater car championships racing in the Formula Ford category for two successful seasons before moving up to Formula Renault.

2005 proved to be an outstanding year of achievements for Oliver when he became the 2005 Formula Renault UK Champion having gained 5 wins, 7 podiums, 4 pole positions and 3 ELF /Atol Driver of the Day Awards. He was also awarded BRDC Rising Star status.

Oliver's perfect end to the year was receiving the prestigious McLaren Autosport Young Driver of The Year Award that December, presented to him by Formula One legend Sir Stirling Moss.

2006 saw Oliver move up to the British F3 International Series, racing for the famous Carlin Motorsport team, run by Trevor Carlin. Jarvis was an instant success, and won two races, beating Bruno Senna (nephew of the late Ayrton) to 2nd in the standings. He went on to dominate the end of season Macau F3 Grand Prix in 2007, leading every lap and looking unchallenged throughout to take the biggest victory of his career.[2]

Jarvis was added to the roster for A1 Team Great Britain in A1 Grand Prix, and may get a chance to race often in 2006-07 season, should he impress more than Darren Manning and Robbie Kerr, or should the two be unavailable for any reason. 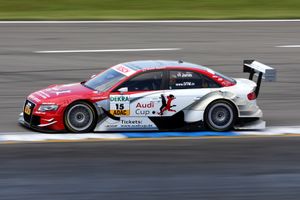 Jarvis driving for Audi (Phoenix) in the 2009 Deutsche Tourenwagen Masters season on the Hockenheimring.

Oliver did get his first chance at the Beijing International Streetcircuit in China, the third race weekend of the season. Through a problematic weekend, where problems with the track arose, Jarvis started the Sprint race in 8th, and finished in 7th in a race that saw little racing, following 7th-starting South Africa spinning, bringing out the Safety Car for a majority of the race. In the Feature race, Oliver therefore started 7th. After controversially making his mandatory pitstop on the lap the Safety Car was deployed (A1GP rules state that cars cannot pit during Safety Car periods), Jarvis ended up running 8th for a majority of the race, an 8th that was actually a net 4th, given the cars in the first four places were yet to pit. After they did, Oliver moved up to fourth, and looked to be heading for that position, until the leading duo, The Netherlands driver Jeroen Bleekemolen and Germany's Nico Hülkenberg both retired on the same lap, leaving Jarvis to finish second, behind Italy's Enrico Toccacelo.

Jarvis' next outing was at the Mexico round. This time Jarvis went one better, winning the Feature race for Great Britain's first ever A1 Grand Prix victory. 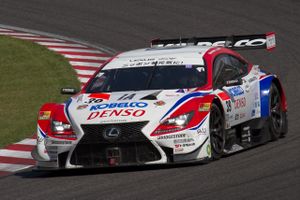 During the Pokka 1000km in Suzuka, Jarvis won the race partnering with Juichi Wakisaka and André Lotterer despite not having to drive throughout the race.[3]