Olof Skötkonung (c. 980–1022) was King of Sweden, son of Eric the Victorious and, according to Icelandic sources, Sigrid the Haughty. He succeeded his father in 995.

One of many explanations to the name Skötkonung is that it is derived from the Swedish word "skatt", which can mean either "taxes" or "treasure". The latter meaning has given the interpretation "tributary king" and one English scholar speculates about a tributary relationship to the Danish king Sweyn Forkbeard, who was his stepfather.[1] This explanation is however highly speculative as it is not supported by any evidence or historical sources. Another possible explanation of the name is that it means "treasure king" and refers to the fact that he was the first Swedish king to stamp coins.[2] An ancient land ownership ceremony which placed a parcel of earth in someone's lap (Swedish: sköte) was called scotting and may have been involved in this epithet.[3]

The Icelandic "Óláfr sænski" means "Olaf the Swedish", an epithet used to distinguish him from the Norwegian kings Olaf Tryggvasson and Olaf Haraldsson.

Our knowledge of Olof is mostly based on Snorri Sturluson's and Adam of Bremen's accounts, which have been subject to criticism from source-critical scholars. But according to Adam of Bremen, Sweyn Forkbeard was forced to defend his Danish kingdom from attacks by Olof who claimed the Danish throne. The conflict was resolved by Sweyn's marriage with Olof's mother and the two kings were thereafter allies. Also Snorri Sturluson describes Sweyn and Olof as equal allies when they defeated the Norwegian king Olav Tryggvason in the battle of Svolder 1000, and thereafter divided Norway between themselves.

Olof is said to have preferred royal sports to war and therefore Sweyn Forkbeard retook Denmark, which Olof's father Eric had conquered.[4] Olof also lost the right to tribute which his predecessors had preserved in what is now Estonia and Latvia.

In 1000, he allied with Sweyn Forkbeard, who was married to Olof's mother, and with the Norwegian Jarls Eric and Sven, against the Norwegian King Olaf Tryggvason. Olaf Tryggvason died in the Battle of Svolder and Olof gained a part of Trøndelag as well as modern Bohuslän.[5]

When the Norwegian kingdom was reestablished by Olaf II of Norway, a new war erupted between Norway and Sweden. Many men in both Sweden and Norway tried to reconcile the kings. In 1018, Olof's cousin, the earl of Västergötland, Ragnvald Ulfsson and the Norwegian king's emissaries Björn Stallare and Hjalti Skeggiason had arrived at the thing of Uppsala in an attempt to sway the Swedish king to accept peace and as a warrant marry his daughter Ingegerd Olofsdotter to the king of Norway. The Swedish king was greatly angered and threatened to banish Ragnvald from his kingdom, but Ragnvald was supported by his foster-father Thorgny Lawspeaker.

Thorgny delivered a powerful speech in which he reminded the king of the great Viking expeditions in the East that predecessors such as Erik Anundsson and Björn had undertaken, without having the hubris not to listen to their men's advice. Thorgny, himself, had taken part in many successful pillaging expeditions with Olof's father Eric the Victorious and even Eric had listened to his men. The present king wanted nothing but Norway, which no Swedish king before him had desired. This displeased the Swedish people, who were eager to follow the king on new ventures in the East to win back the kingdoms that paid tribute to his ancestors, but it was the wish of the people that the king make peace with the king of Norway and give him his daughter Ingegerd as queen.

Thorgny finished his speech by saying: "if you do not desire to do so, we shall assault you and kill you and not brook any more of your warmongering and obstinacy. Our ancestors have done so, who at Mula thing threw five kings in a well, kings who were too arrogant as you are against us."

However, Olof married his daughter Ingegerd-Irene to Yaroslav I the Wise instead. An impending war was settled when Olof agreed to share his power with his son Anund Jacob. Olof was also forced to accept a settlement with Olaf II of Norway at Kungahälla, who already had been married (unbeknownst to Olof) with Olof's daughter, Astrid, through the Geatish jarl Ragnvald Ulfsson.

After Cnut the Great became King of England in 1016, he sent the two sons of Edmund Ironside to Olof (who was either Canute's half-brother or stepbrother), supposedly with instructions to have the children murdered. Instead of having them killed, the two boys were secretly sent either to Kiev,[6] where Olof's daughter Ingigerd was the Queen, or to Poland, where Canute's uncle Bolesław I Chrobry was duke.[7]

Olof was baptised in Husaby, probably by the missionary Sigfrid, c.1008. At Husaby parish church, there is a sign commemorating his baptism; nearby is a well thought to be the same sacred spring where Olof was baptised. He was the first Swedish king to remain a Christian until his death. However, according to Adam of Bremen, the fact that the vast majority of the Swedes were still pagan forced him to limit Christian activities to the already Christian border province of Västergötland.

When he stamped coins in Sigtuna in the province of Uppland Olof used the word rex for king. OLUF REX as in the coin displayed above or OLAF REX. The use of Latin seems to suggest that he was already baptised at this time but on the other hand the coins were imitating English pennies in type and style. Sigtuna is written SITUN, ZINT (in the coin above), ZTNETEI, or SIDEI. The two last has been deciphered as Si(gtuna) Dei meaning God's Sigtuna.[8][9] 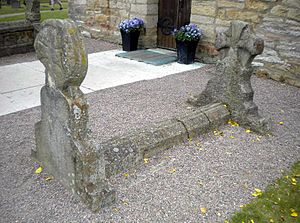 His death is said to have taken place in the winter of 1021–1022. According to a legend he was martyred at Stockholm after refusing to sacrifice to pagan gods.

Since the 1740s, it has been claimed that he was buried in Husaby in the Christian part of his kingdom, but such identifications are controversial.