From Infogalactic: the planetary knowledge core
Jump to: navigation, search
For other uses, see Olympias (disambiguation). 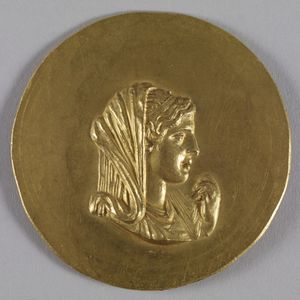 Imperial Roman medallion with Olympias: part of a 3rd-century series representing Emperor Caracalla as the descendant of Alexander the Great.[1]

Olympias (Greek: Ὀλυμπιάς, pronounced [olympias], c. 375–316 BC[2]) was a daughter of king Neoptolemus I of Epirus, the fourth wife of the king of Macedonia, Philip II, and mother of Alexander the Great. She was a devout member of the orgiastic snake-worshiping cult of Dionysus, and it is suggested by the 1st century AD biographer, Plutarch, that she may have slept with snakes.[3] 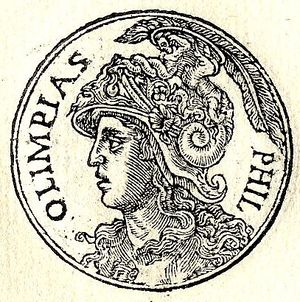 Olympias was the daughter of Neoptolemus I, king of the Molossians, an ancient Greek tribe in Epirus, and sister of Alexander I. Her family belonged to the Aeacidae, a well-respected family of Epirus, which claimed descent from Neoptolemus, son of Achilles. Apparently, she was originally named Polyxena, as Plutarch mentions in his work Moralia, and changed her name to Myrtale prior to her marriage to Philip II of Macedon as part of her initiation into an unknown mystery cult.[4]

The name Olympias was the third of four names by which she was known. She probably took it as a recognition of Philip's victory in the Olympic Games of 356 BC, the news of which coincided with Alexander's birth (Plut. Alexander 3.8).[5] She was finally named Stratonice, which was probably an epithet attached to Olympias following her victory over Eurydice in 317 BC.[4] 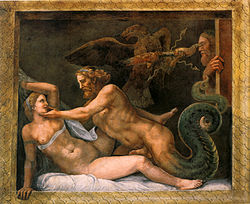 When Neoptolemus I died in 360 BC, his brother Arymbas succeeded him on the Molossian throne. In 358 BC, Arymbas made a treaty with the new king of Macedonia, Philip II, and the Molossians became allies of the Macedonians. The alliance was cemented with a diplomatic marriage, when Arymbas' niece Olympias became Philip's wife in 357 BC and, consequently, queen consort of Macedonia. Philip had first fallen in love with Olympias when both were initiated into the mysteries of Cabeiri at the Sanctuary of the Great Gods, on the island of Samothrace.[6] 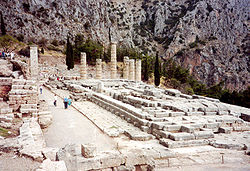 Ruins of the Temple of Apollo.

One year later, in 356 BC, Philip's race horse won in the Olympic Games; for this victory his wife, who was known then as Myrtale, received the name Olympias. In the summer of the same year, Olympias gave birth to her first child, Alexander. In ancient Greece people believed that the birth of a great man was accompanied by portents. As Plutarch describes, the night before the consummation of their marriage Olympias dreamed that a thunderbolt fell upon her womb and a great fire was kindled, its flames dispersed all about and then were extinguished. After the marriage Philip dreamed that he put a seal upon his wife's womb, the device of which was the figure of a lion. Aristander's interpretation was that Olympias was pregnant of a son whose nature would be bold and lion-like.[7] Philip and Olympias also had a daughter, Cleopatra.

Their marriage was very stormy; Philip's volatility and Olympias' jealous temper had led to a growing estrangement. Things got even worse in 337 BC when Philip married a noble Macedonian woman, Cleopatra, who was given the name Eurydice by Philip and who was niece of Attalus. The marriage caused great tensions between Philip, Olympias and Alexander. Olympias went into voluntary exile in Epirus along with her son Alexander, who sided with her, staying at the Molossian court of her brother Alexander I, who was the king at the time.

In 336 BC, Philip cemented his ties to Alexander I of Epirus by offering him the hand of his and Olympias' daughter Cleopatra in marriage, a fact that led Olympias to further isolation as she could no longer count on her brother's support. However, Philip was murdered by Pausanias, a member of Philip's somatophylakes, his personal bodyguard, while attending the wedding, and Olympias, who returned to Macedonia, was suspected of having countenanced his assassination.

Alexander's reign and the wars of succession 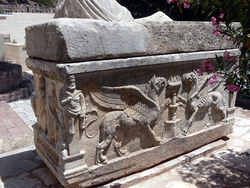 After the death of Philip II, Olympias ordered the execution of Eurydice and her child, in order to secure Alexander's position as king of Macedonia. During Alexander's campaigns, she regularly corresponded with him and may have confirmed her son's claim in Egypt that his father was not Philip but Zeus. The relationship between Olympias and Alexander was cordial, but her son kept her away from politics. However, she wielded great influence in Macedonia and caused troubles to Antipater, the regent of the kingdom. In 330 BC, she returned to Epirus and served as a regent to her cousin Aeacides in the Epirote state, as her brother Alexander I had died during a campaign in southern Italy.

After Alexander the Great's death in Babylon in 323 BC, his wife Roxana bore him a posthumous son who was called Alexander IV. The latter, along with his uncle Philip III Arrhidaeus, half brother of Alexander the Great and mentally disabled, were subject to the regency of Perdiccas, who tried to strengthen his position by a marriage with Antipater's daughter Nicaea. At the same time, Olympias offered Perdiccas the hand of her daughter Cleopatra. Perdiccas chose Cleopatra, which angered Antipater, who invaded Macedon, deposed Perdiccas, and declared himself regent, only to die within the year.

Polyperchon succeeded Antipater in 319 BC as regent, but Antipater's son Cassander established Philip II’s simpleminded son Philip III (Arrhidaeus) as king and forced Polyperchon out of Macedonia.[8] He fled to Epirus, taking Roxana and her son Alexander IV with him. At the beginning, Olympias had not been involved in this conflict, but she soon realized that in case of Cassander's rule, her grandson would definitely lose the crown and as a result, she allied with Polyperchon in 317.The Macedonian soldiers supported her return and the united army of Polyperchon and Olympias with the house of Aeacides invaded Macedonia to drive Cassander out from power.

After winning in battle, Olympias captured and executed Philip III Arrhidaeus and his wife Eurydice in October 317 BC, as well as Cassander’s brother and a hundred of his partisans.[8] Cassander blockaded and besieged Olympias in Pydna and forced her to surrender. One of the terms of the capitulation had been that Olympias's life would be saved, but Cassander had decided to execute her, sparing only temporarily the lives of Roxana and Alexander IV (they were later executed in 310 BC). When the fortress of Pydna fell Cassander ordered Olympias killed but the soldiers refused to kill the mother of Alexander. In the end, the families of her many victims stoned her to death with the approval of Cassander,[9] who is also said to have denied to her body the rights of burial.

A medal bearing the name Olympias was found in 1902 at Abukir, Egypt,[1] and belongs to the Archaeological Museum of Thessaloniki.[dubious – discuss] The reverse shows a Nereid mounted on a fantastic sea creature. It had been suggested that the Olympias depicted on the medal was Queen Olympias, but this theory has been challenged. The name ΟΛΥΜΠΙΑΔΟΣ is thought to refer to the Olympiads instead.[10]

Archaeologists believe that these medals were awarded to the victors in the Olympic Games which survived during the Roman period in Macedonian cities such as Veria. These Games, known as the Alexandrian Olympics, were held in honor of the Roman emperors who visited the cities of Macedonia.[citation needed]