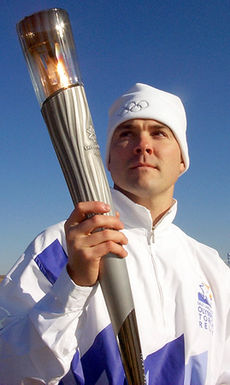 The Olympic Charter is a set of rules and guidelines for the organization of the Olympic Games, and for governing the Olympic movement. Its last revision was on the 9 September 2013.

Adopted by International Olympic Committee (IOC), it is the codification of the fundamental principles, rules and by-laws. French and English are the official languages of the Olympic Charter.

Chapter 1: The Olympic Movement and its Action

Article 6: The Olympic Games are competitions between athletes in individual or team events and not between countries.

The five-ringed symbol of the Olympic Games.

Article 8: The Olympic symbol consists of five interlocking rings which, from left to right are blue, yellow, black, green and red.

This chapter outlines the membership, meetings, and guiding doctrines of the International Olympic Committee (IOC).

Chapter 3 discusses the role of International Federations (IFs) in the Olympic movement. IFs are international non-governmental organizations that administer to sports at the world level and encompass organizations administering such sports at the national level. For each sport that is part of the Olympic Games, an International Federation exists. These IFs work to ensure their sports are developed in a way that agrees with the Olympic Charter and the Olympic spirit. With technical expertise in its particular sport, an IF has control over eligibility for competition as well as details of the venue in which the athletic competition takes place.

Article 28: The mission of the National Olympic Committees (NOCs) is to develop, promote and protect the Olympic Movement in their respective countries. The role of NOCs within each country is to promote the spirit of Olympicism, ensure the observance of the Olympic Charter, and to encourage ethics in and development of sports. They are in charge of their country's representation at the Games, deciding on a host city for the Games, and cooperation with governmental and non-governmental bodies during the Games.

This chapter addresses the celebration of the Olympic Games, the selection of the host city, the eligibility code for participation in the games, those sports included in the Games, media coverage, publications, and propaganda allowed for the Games.

In addition, Section 3 of this chapter discusses applicable protocol for Olympic functions and events. This includes an outline of use of the Olympic flag, flame, and opening and closing ceremonies. The five rings of the Olympic games signify the five continents.

The Olympic Charter is not simply a matter of unenforced policy for the Olympic Games. Throughout history, it has served as guidance for the proceedings of the Games. Below are a few of the most recent examples:

Protection of Olympism as a belief

There has been a suggestion from lawyers that, in the UK, those with a strong belief in Olympism could benefit from protection against discrimination in exactly the same way that followers of Islam, Christianity, Judaism or any other religion are protected.[6]