Olympiastadion (German pronunciation: [oˈlʏmpi̯aˈʃtaːdi̯ɔn]) is a stadium located in Munich, Germany. Situated at the heart of the Olympiapark München in northern Munich, the stadium was built as the main venue for the 1972 Summer Olympics.

Until the construction of the Allianz Arena for the 2006 World Cup, the stadium was home to Bayern Munich and TSV 1860 Munich.

Designed by the German architect Günther Behnisch and the engineer Frei Otto, the lightweight tent construction of the Olympiastadion was considered revolutionary for its time.[3] This included large sweeping canopies of acrylic glass stabilized by steel cables that were used for the first time on a large scale. The idea was to imitate the Alps and to set a counterpart to the 1936 Summer Olympics in Berlin, held during the Nazi regime. The sweeping and transparent canopy was to symbolize the new, democratic and optimistic Germany. This is reflected in the official motto: "The cheerful Games"[4] ("Die Heiteren Spiele").[5]

The stadium was built by Bilfinger Berger between 1968 to 1972 in a pit made by bombings Munich suffered during World War II. This pit made construction easier.[6][7]

Panorama view of the Münchener Olympiastadion 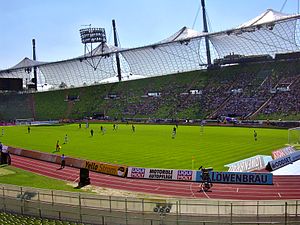 Following the Olympics, the stadium became the home of FC Bayern Munich. In 1979 the ground played host to the 1979 European Cup Final in which Nottingham Forest won the first of their consecutive European Cups under Brian Clough.

In the 1990s Bayern Munich's rivals TSV 1860 Munich moved into the stadium. The two teams coexisted in the Olympiastadion until 2005, when both clubs moved to the purpose built Allianz Arena.

Since 2005, it is the host of the yearly air and style snowboard event.

On 31 December 2006, the stadium made history as being the first venue to host the Tour de Ski cross-country skiing competition. The individual sprint events, held at 1100 m, were won by Norway's Marit Bjørgen (women) and Switzerland's Christoph Eigenmann (men). The snow was made in the stadium by combining the hot air with the cold refrigerated water that causes the snow to act like the icy type you would see in the Alps.

It went unused in the 2006 FIFA World Cup due to the Allianz Arena being the host stadium in Munich.

On 23 to 24 June 2007, the stadium played host to the Spar European Cup 2007, a yearly athletics event featuring the top 8 countries from around Europe.

The DTM touring car series held its first stadium event there in 2011: a Race of Champions-style event which took part over a two-day period, although it was not a championship scoring round.[8] Edoardo Mortara won the first day, and Bruno Spengler the second.[9][10] The event was repeated in 2012, but the stadium withdrew in 2013 because it proved impossible to turn it into a points-scoring event.[11]

The stadium was one of the venues for the 1974 FIFA World Cup.

The following games were played at the stadium during the World Cup of 1974:

The stadium was one of the venues for the UEFA Euro 1988.

The following games were played at the stadium during the Euro 1988:

In addition to being a sports venue, the stadium has hosted many open-air concerts.

Michael Jackson performed at the stadium five times, all sold out with maximum capacity of the stadium for musical acts. The first concert was on 8 July 1988 during his Bad concerts, with more than 72,000 fans present. The second sell out concert, on 27 June 1992 kicked off his Dangerous World Tour, to another 72,000 fans. The next two were on 4 & 6 July 1997 during his HIStory World Tour for a total audience of 145,000 people. Those two concerts were filmed & mixed and have since been aired countless times on television all over the world. The fifth and last concert, on 27 June 1999 was for the second MJ & Friends concert, in which the star joined several other artists to raise funds to help needy and underprivileged children around the world.

Diana Ross sold out two nights in 1985 on her Swept Away Tour with more than 142,000 total audience attendees.

Parts of the 1975 film Rollerball were shot on the (then) futuristic site surrounding the stadium.

American rock band Guns N' Roses filmed parts of their Estranged video there when they visited Munich in June 1993.

The Olympic Stadium also hosted Motorcycle speedway when it held the 1989 World Final on 2 September 1989. Denmark's Hans Nielsen won his third World Championship with a 15-point maximum from his five rides. The late Simon Wigg of England finished in second place after defeating countryman Jeremy Doncaster in a run-off to decide the final podium places after both had finished with 12 points from their five rides. Three time champion Erik Gundersen of Denmark finished in fourth place with 11 points. Gundersen, the defending World Champion, missed finishing outright second when his bike's engine expired while he was leading Heat 9 of the World Final.

In August 2014 the Olympic Stadium hosted the first ever geocaching "Giga" event,[57] which was attended by over 9,000 enthusiasts from around the world.