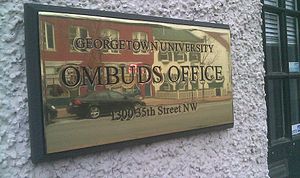 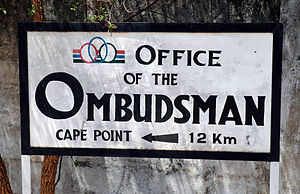 An ombudsman or public advocate is usually appointed by the government or by parliament, but with a significant degree of independence, who is charged with representing the interests of the public by investigating and addressing complaints of maladministration or a violation of rights. In some countries an Inspector General, Citizen Advocate or other official may have duties similar to those of a national ombudsman, and may also be appointed by a legislature. Below the national level an ombudsman may be appointed by a state, local or municipal government. Unofficial ombudsmen may be appointed by, or even work for, a corporation such as a utility supplier, newspaper, NGO, or professional regulatory body.

The typical duties of an ombudsman are to investigate complaints and attempt to resolve them, usually through recommendations (binding or not) or mediation. Ombudsmen sometimes also aim to identify systematic issues leading to poor service or breaches of people's rights. At the national level, most ombudsmen have a wide mandate to deal with the entire public sector, and sometimes also elements of the private sector (for example, contracted service providers). In some cases, there is a more restricted mandate, for example with particular sectors of society. More recent developments have included the creation of specialized Children's Ombudsman and Information Commissioner agencies.

In some jurisdictions an ombudsman charged with handling concerns about national government is more formally referred to as the "Parliamentary Commissioner" (e.g. the United Kingdom Parliamentary Commissioner for Administration, and the Western Australian state Ombudsman). In many countries where the ombudsman's responsibility includes protecting human rights, the ombudsman is recognized as the national human rights institution. The post of ombudsman had by the end of the 20th century been instituted by most governments and by some intergovernmental organizations such as the European Union.

A prototype of ombudsmen may have flourished in China during the Qin Dynasty (221 BC), and in Korea during the Joseon Dynasty.[1] The position of secret royal inspector, or Amhaeng-eosa (암행어사, 暗行御史) was unique to the Joseon Dynasty, where an undercover official directly appointed by the king was sent to local provinces to monitor government officials and look after the populace while travelling incognito. The Roman Tribune had some similar roles, with power to veto acts that infringed upon the Plebeians. Another precursor to the ombudsman was the Turkish Diwan-al-Mazalim which appears to go back to the second caliph, Umar (634–644) and the concept of Qadi al-Qadat.[2] They were also attested in Siam, India, the Liao dynasty (Khitan Empire), Japan, and China.[3]

An indigenous Swedish, Danish and Norwegian term, ombudsman is etymologically rooted in the Old Norse word umboðsmaðr, essentially meaning "representative" (with the word umbud/ombud meaning proxy, attorney, that is someone who is authorized to act for someone else, a meaning it still has in the Scandinavian languages). The first preserved use is in Sweden. In the Danish Law of Jutland from 1241, the term is umbozman and means a royal civil servant in a hundred. From 1552, it is also used in the other Scandinavian languages such as the both Icelandic and Faroese umboðsmaður, the Norwegian ombudsmann and the Danish ombudsmand. The Swedish speaking minority in Finland uses the Swedish terminology.

The Parliamentary Ombudsman is the institution that the Scandinavian countries subsequently developed into its contemporary form, and which subsequently has been adopted in many other parts of the world. The word ombudsman and its specific meaning have since been adopted in various languages, including Spanish, Dutch and Czech. The German language uses Ombudsmann, Ombudsfrau and Ombudsleute. Notable exceptions are French and Finnish, which use translations instead. Modern variations of this term include "ombud," "ombuds," "ombudsperson," or "ombudswoman," and the conventional English plural is ombudsmen.

In general, an ombudsman is a state official appointed to provide a check on government activity in the interests of the citizen, and to oversee the investigation of complaints of improper government activity against the citizen. If the ombudsman finds a complaint to be substantiated, the problem may get rectified, or an ombudsman report is published making recommendations for change. Further redress depends on the laws of the country concerned, but this typically involves financial compensation. Ombudsmen in most countries do not have the power to initiate legal proceedings or prosecution on the grounds of a complaint. This role is sometimes referred to as a "tribunician" role, and has been traditionally fulfilled by elected representatives – the term refers to the ancient Roman "tribunes of the plebeians" (tribuni plebis), whose role was to intercede in the political process on behalf of common citizens.

The major advantage of an ombudsman is that he or she examines complaints from outside the offending state institution, thus avoiding the conflicts of interest inherent in self-policing. However, the ombudsman system relies heavily on the selection of an appropriate individual for the office, and on the cooperation of at least some effective official from within the apparatus of the state.

Many private companies, universities, non-profit organisations and government agencies also have an ombudsman (or an ombuds office) to serve internal employees, and managers and/or other constituencies. These ombudsman roles are structured to function independently, by reporting to the CEO or board of directors, and according to International Ombudsman Association (IOA) Standards of Practice they do not have any other role in the organisation. Organisational ombudsmen often receive more complaints than alternative procedures such as anonymous hot-lines.[5]

Since the 1960s, the profession has grown in the United States, and Canada, particularly in corporations, universities and government agencies. The organizational ombudsman works as a designated neutral party, one who is high-ranking in an organization, but who is not part of executive management. Using an alternative dispute resolution (ADR) or appropriate dispute resolution approach, an organisational ombudsman can provide options to whistleblowers or employees and managers with ethical concerns; provide coaching, shuttle diplomacy, generic solutions (meaning a solution which protects the identity of one individual by applying to a class of people, rather than just for the one individual) and mediation for conflicts; track problem areas; and make recommendations for changes to policies or procedures in support of orderly systems change.

In the science fiction television series Babylon 5, the arbiters aboard space station Babylon 5 who preside over cases stemming from public complaints are referred to as ombuds (this is both the singular and plural designation), the gender-neutral title for an ombudsman. Just as with their modern European counterparts, the ombuds only preside over public cases, including robbery, assault, and murder, and do not interpret law as a regular judiciary does.

John Perry, the protagonist of The Last Colony, written by John Scalzi starts off the novel as an ombudsman for a newly settled human colony.

The webcomic PvP ran a story arc starting at the beginning of March 2009 parodying the comic series and movie Watchmen called The Ombudsmen.