Fresco from the 14th century depicting St. Gregory the Illuminator of Armenia wearing a white omophorion.

In the Eastern Orthodox and Eastern Catholic liturgical tradition, the omophorion (Greek: ὠμοφόριον, meaning "[something] borne on the shoulders"; Slavonic: омофоръ, omofor) is the distinguishing vestment of a bishop and the symbol of his spiritual and ecclesiastical authority. Originally of wool, it is a band of brocade decorated with four crosses and an eight-pointed star and is worn about the neck and shoulders.[1]

By symbolizing the lost sheep that is found and carried on the Good Shepherd's shoulders, it signifies the bishop's pastoral role as the icon of Christ.

Clergy and ecclesiastical institutions subject to a bishop's authority are often said to be "under his omophorion".

The equivalent vestment in Western Christian usage is the archiepiscopal pallium, the use of which is subject to different rubrics and restrictions, while all Orthodox bishops wear the omophorion.

The omophorion has two forms: the ancient great omophorion, which passes around the neck, is folded in the front, and hangs down past the knees in both the front and the back, like a loosely-worn long scarf; and the small omophorion which is much simpler, passing around the neck and hanging down in the front similar to an epitrachelion (stole), only wider and shorter, coming down only a little past the waist. Because of the complexity of the great omophorion, and because of the dignity of the episcopal office, whenever the bishop puts on the omophorion or takes it off, he is assisted by two subdeacons.

At the Divine Liturgy, the rubrics call for the bishop to put on and take off the omophorion numerous times. When he is first vested, the subdeacons place the great omophorion on him, but afterwards, when the rubric calls for him to wear the omophorion, it is replaced, for the sake of convenience, with the small omophorion. In some places, when several bishops concelebrate, it is now the custom for the chief celebrant to use the great omophorion when called for, and the other bishops to wear the small omophorion throughout.

During the All-Night Vigil, the bishop will wear the small omophorion at the beginning, but then near the end will change into the great omophorion for the Great Doxology. 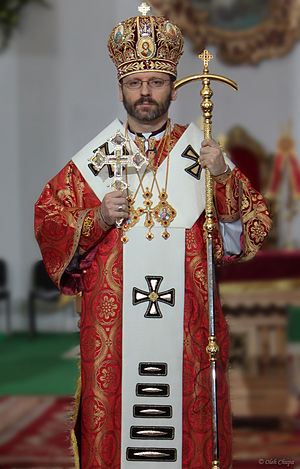 Major archbishop Sviatoslav Shevchuk wearing a white omophorion which has been sewn into shape (with five bars at the bottom, signifying his position as head of an Eastern rite church).

In the early church, the omophorion was a broad band of white wool ornamented with crosses and draped loosely over the neck, shoulders, and breast. The modern Roman pallium developed from this early omophorion; however, in the West it has changed over the centuries into a circular, thin woolen garment for the shoulders, with short, weighted pendants before and behind. The papal pallium originally adopted by Pope Benedict XVI at the beginning of his pontificate is closer to the original omophorion. Pope Benedict XVI later reverted to the original design of the pallium, but with red crosses instead of black.

The only change in the omophorion in the East has been the augmentation of its width, and the material from which it is made. There is testimony to the existence of the omophorion as a liturgical vestment of the bishop in Isidore of Pelusium about the year 400. It was made of wool and was already seen as symbolic of the duties of bishops as shepherds of their flocks. In the miniatures of an Alexandrian Chronicle of the World, written probably during the fifth century we already find pictorial representation of the omophorion. In later times we meet the same representation on the renowned ivory tablet of Trier, depicting the solemn translation of relics. Among the pictures dating from the seventh and eighth centuries, in which we find the omophorion, are the lately discovered frescoes in S. Maria, Antiqua in the Roman Forum. The representation in these frescoes is essentially the same as its present form.

The omophorion probably developed from the civil omophorion, a shoulder garment or shawl in general use. Probably either the bishops introduced directly by a positive precept as a liturgical pontifical badge a humeral cloth resembling the ordinary omophorion and called by that name, or the civil omophorion was at first used by the bishops as a mere ornament without any special significance, but in the course of time gradually developed into a distinctively episcopal ornament, and finally assumed the character of an episcopal badge of office.

In Oriental Orthodoxy, the omophorion takes a number of different forms: