From Infogalactic: the planetary knowledge core
Jump to: navigation, search
This article is about conservatism as a political and social philosophy. For other uses, see Conservatism (disambiguation).

One-nation conservatism (also known as one-nationism, or Tory democracy) is a form of British political conservatism that views society as organic and values paternalism and pragmatism. The phrase "One-nation Tory" originated with Benjamin Disraeli (1804–1881), who served as the chief Conservative spokesman and became Conservative Prime Minister in February 1868.[1] He devised it to appeal to working class men as a solution to worsening divisions in society.

As a political philosophy, one-nation conservatism reflects the belief that societies exist and develop organically, and that members within them have obligations towards each other. There is particular emphasis on the paternalistic obligation of the upper classes to those classes below them.

The ideology featured heavily during Disraeli's terms in government, during which considerable social reforms were passed. Towards the end of the 19th century, the party moved away from paternalism in favour of free market capitalism, but fears of extremism during the interwar period caused the revival of one-nation conservatism. The philosophy continued to be held by the party throughout the post-war consensus until the rise of the New Right, which attributed the country's social and economic troubles to one-nation conservatism. David Cameron, leader of the Conservative Party, named Disraeli as his favourite Conservative and some commentators and MPs have suggested that Cameron's ideology contains an element of one-nationism.[who?] Other commentators have questioned the degree to which Cameron and his coalition have embodied One-Nation Conservatism, instead locating them in the intellectual tradition of Thatcherism.[2][3] 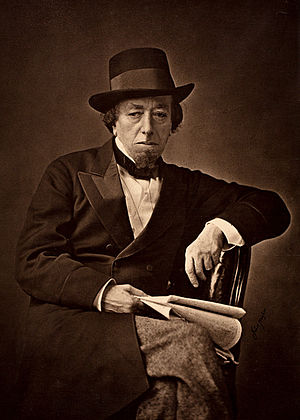 One-nation conservatism was first conceived by the Conservative British Prime Minister Benjamin Disraeli,[4] who presented his political philosophy in two novels – Sybil, Or The Two Nations and Coningsby – published in 1845 and 1844 respectively.[5][6] Disraeli's conservatism proposed a paternalistic society with the social classes intact but with the working class receiving support from the establishment. He emphasised the importance of social obligation rather than the individualism that pervaded his society.[4] Disraeli warned that Britain would become divided into two "nations", of the rich and poor, as a result of increased industrialisation and inequality.[5] Concerned at this division, he supported measures to improve the lives of the people to provide social support and protect the working classes.[4]

Disraeli justified his ideas by his belief in an organic society in which the different classes have natural obligations to one another.[4] He saw society as naturally hierarchical and emphasised the obligation of those at the top to those below. This was based in the feudal concept of noblesse oblige, which asserted that the aristocracy had an obligation to be generous and honourable; to Disraeli, this implied that government should be paternalistic.[5] Unlike the New Right, one-nation conservatism takes a pragmatic and non-ideological approach to politics and accepts the need for flexible policies; one-nation conservatives have often sought compromise with their ideological opponents for the sake of social stability.[7] Disraeli justified his views pragmatically by arguing that, should the ruling class become indifferent to the suffering of the people, society would become unstable and social revolution would become a possibility.[4]

Benjamin Disraeli adopted one-nation conservatism for both ethical and electoral reasons. Before he became leader of the Conservative Party, Disraeli had announced that, as a result of the Reform Act 1867 which had enfranchised the male working class, the party needed to pursue social reforms if it were to have electoral success. One-nationism would both improve the conditions of the poor and portray the Liberal Party as selfish individualists.[8] Because the party portrayed itself as a national (and not class based) party, its members were unsure whether to make specific appeals to the working classes. A more positive approach to the working class by the party developed later out of the electoral necessity to secure working class votes.[9]

While in government, Disraeli presided over a series of social reforms which supported his one-nation politics and aimed to create a benevolent hierarchy.[10] He appointed a Royal Commission to assess the state of law between employers and employees, the result of which prompted Richard Cross to pass the Employers and Workmen Act of 1875. This act made both sides of industry equal before the law and the breach of contract a civil offence, rather than criminal.[9] Cross also passed the Conspiracy, and Protection of Property Act in the same year which enshrined the right to strike of workers by ensuring that acts carried out by a workers' group could not be indicted as conspiracy.[11]

By the end of the 19th century, the Conservatives had moved away from their one-nation ideology and were increasingly supportive of capitalism and free enterprise.[12] During the interwar period, public fear of communism restored the Conservative Party to one-nationism as it defined itself as the party of national unity and began to support moderate reform. As the effects of the Great Depression were felt in Britain, the party was drawn to even greater levels of state intervention.[13] The Conservative Prime Ministers Neville Chamberlain and Stanley Baldwin pursued an interventionist style of conservatism which won them democratic support because of its wide electoral appeal.[10] Throughout the post-war consensus of the 1950s and '60s, the Conservative Party was dominated by one-nation conservatives whose ideas were inspired by Disraeli.[14] The social and economic policies of the consensus appealed to the paternalism of one-nation conservatism because they appeared to provide prosperity and alleviate social problems such as poverty and disease; this was intellectually developed by the 'new conservatism' movement, led by Rab Butler.[13] New conservatism attempted to distinguish itself from the socialism of Anthony Crosland by concentrating welfare on those in need and encouraging people to help themselves, rather than foster dependency on the state.[15]

Until the mid-1970s, the Conservative Party was mostly controlled by one-nation conservatives.[16] The rise of the New Right in conservative politics led to a critique of one-nation conservatism which contended that Keynesian economics and welfarism had damaged the economy and society. The Winter of Discontent of 1978–79 was portrayed by the New Right as illustrative of the overextension of the state. Figures such as Margaret Thatcher believed that to reverse the national decline, it was necessary to revive old values of individualism and challenge the dependency culture created by the welfare state.[17]

The Conservative Party's 2010 manifesto contained a section on "One World Conservatism"—a commitment to spend 0.7% of national income on well-targeted aid[18]—and David Cameron, the current leader of the party and British Prime Minister, named Disraeli as his favourite Conservative.[19] In 2006, Conservative Member of Parliament Andrew Tyrie published a pamphlet which claimed that Cameron was following the one-nationist path of Disraeli.[20] Phillip Blond, a British political theorist who has had past connections with the Conservative Party,[21] has proposed a renewed version of one-nation conservatism.[19]

"I'm a one-nation Tory. There is a duty on the part of the rich to the poor and to the needy, but you are not going to help people express that duty and satisfy it if you punish them fiscally so viciously that they leave this city and this country. I want London to be a competitive, dynamic place to come to work."[22]