From Infogalactic: the planetary knowledge core
Jump to: navigation, search
This article is about singular production items. For other uses, see One-off (disambiguation). 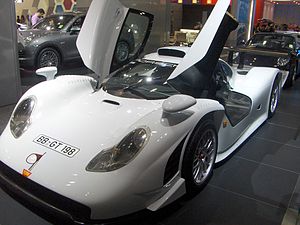 The Porsche 911 GT1 '98 "Straßenversion" is a street-legal racing car and a one-off of the racing version, that succeeded at the 24 Hours of Le Mans in 1998.

A one-off is something made or occurring only once, independent of any pattern.[1] First used in 1934,[2] this term is employed to differentiate singular items from those in a series: e.g. "the Lincoln Futura was a one-off". It has been suggested that it is a misspelling of "one-of", but this etymology is not supported by sources such as the Oxford English Dictionary.[3]