Onslow County comprises the Jacksonville, NC Metropolitan Statistical Area. The southern border is the coast of the Atlantic Ocean.

European and English settlers arrived here in 1713 in what was originally part of the colonial precincts of Carteret and New Hanover. Onslow County was formed in 1734 and was named for the Honorable Arthur Onslow, Speaker of the British House of Commons. After a lethal 1752 hurricane, the county courthouse was relocated from Town Point to Wantland’s Ferry; this settlement was eventually incorporated in 1842 and named Jacksonville after President Andrew Jackson. Through much of the first half of the 20th century, the county was largely rural, with an economy based on agrarian and maritime communities.

During World War II, Onslow County was dramatically changed in the early 1940s with the establishment of the United States Army Camp Davis near Holly Ridge (now defunct), and the creation of Camp Lejeune in 1941. This increased county population and generated related growth in housing and businesses.

Onslow County’s flat, rolling terrain covers 767 square miles (1,990 km2) and is located in the southeastern coastal plain of North Carolina, approximately 120 miles (190 km) east of Raleigh and 50 miles (80 km) north of Wilmington. The city of Jacksonville is the county seat, and the areas surrounding the city constitute the major population centers and growth areas in the county. The county is home to more than 150,000 people and includes the incorporated towns of Holly Ridge, Richlands, Swansboro, North Topsail Beach, part of Surf City, and unincorporated Sneads Ferry. The U.S. Marine Corps Base, Camp Lejeune comprises approximately 156,000 acres (630 km2); more than 43,000 marines and sailors are stationed there.

The structure of local government in Onslow County was established in the late 19th century. It consists of a five-member Board of Commissioners, all elected at-large for four-year terms. In contrast to electing members from districts, this structure means that candidates are elected by the majority population in the county, reducing representation of any minority points of view. The Board establishes policies and ordinances implemented by the County Manager and his staff. Commissioners are, Barbara M. Ikner (Chair), Paul Buchanan (Vice-Chair), Jack Bright, Million Heir-Williams, and W.C. Jarman.

The main law enforcement agency for Onslow County is the County Sheriff's Department. The elected sheriff is Hans Miller.

Onslow County is a member of the regional Eastern Carolina Council of Governments.

The Albert J. Ellis Airport is located near Richlands and is served by two commercial airlines. 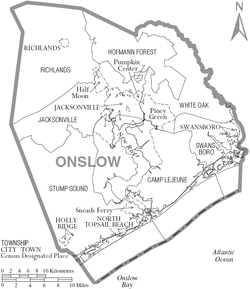