Opération Harmattan is the codename for the French participation in the 2011 military intervention in Libya.[4] It is named for the Harmattan, which are hot dry winds that blow over the Sahara, mostly between November and March.[5] The United States' counterpart to this is Operation Odyssey Dawn, the Canadian counterpart is Operation Mobile and the British counterpart is Operation Ellamy. The no-fly zone was proposed during the Libyan Civil War to prevent government forces loyal to Muammar Gaddafi from carrying out air attacks on Anti-Gaddafi forces. Several countries prepared to take immediate military action at a conference in Paris on 19 March 2011.[6]

French Dassault Rafale planes began reconnaissance missions on 19 March and were the first among the coalition to attack Libyan forces, destroying four tanks.[7] 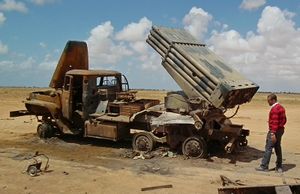 The French Navy anti-air destroyer Forbin and anti-air frigate Jean Bart were already off Libya when the operation commenced.

Aircraft returning from combat missions landed at Solenzara Air Base on Corsica from which further combat sorties were launched.[19]

Eleven sorties were carried out by French aircraft over Libya.[19]

Up to this day, 55 sorties were carried out by French aircraft over Libya.[20] The French Ministry of Defence (MoD) claimed a Mirage 2000-D destroyed another Libyan tank 100 km south of Benghazi.[21]

Aircraft from Charles de Gaulle began operations over Libya, commencing with Rafale F3s conducting reconnaissance and patrols.[13] Forbin and Jean Bart, which were already on station off Libya, joined Task Force 473.[13] The number of combat aircraft forward deployed at Air Base 126 Solenzara was increased to 20 with the arrival of two more Mirage 2000-5 and two more Mirage 2000D, with support aircraft operating out of Saint-Dizier and Avord.[22]

Rafale and Mirage 2000D aircraft from Solenzara and Rafale and Super Etendard aircraft from the Charles de Gaulle conducted reconnaissance and support sorties over Libya.[23]

Air Force and Navy Rafales attacked a command centre south of Tripoli. French and Qatari Mirage 2000-5s conducted joint patrols and air interdiction missions from Souda Air Base. The number of French Mirage 2000-5s based as Souda was increased to four.[29]

Air operations were planned to focus on the region around Zintan and Misrata.[29] Air force Rafales and Mirage 2000Ds and a joint patrol of Navy Rafales and Super Etendards bombed an ammunition dump at Gharyan, 100 kilometres (62 mi) south of Tripoli.[9] Mirage F1CRs conducted reconnaissance missions for the first time in the operation.[9]

At 0600 GMT, NATO took command of all operations in Libya. Subsequent operations were conducted as part of Operation Unified Protector.[31]