OSINT under one name or another has been around for hundreds of years. With the advent of instant communications and rapid information transfer, a great deal of actionable and predictive intelligence can now be obtained from public, unclassified sources.

Open Source Intelligence (OSINT) is the collection and analysis of information that is gathered from public, or open, sources.[2] OSINT is primarily used in national security, law enforcement, and business intelligence functions and is of value to analysts who use non-sensitive intelligence in answering classified, unclassified, or proprietary intelligence requirements across the previous intelligence disciplines.

OSINT sources can be divided up into six different categories of information flow:[3]

OSINT is distinguished from research in that it applies the process of intelligence to create tailored knowledge supportive of a specific decision by a specific individual or group.[4]

OSINT is defined by both the U.S. Director of National Intelligence and the U.S. Department of Defense (DoD), as "produced from publicly available information that is collected, exploited, and disseminated in a timely manner to an appropriate audience for the purpose of addressing a specific intelligence requirement."[5]

According to political scientist Jeffrey T. Richelson, “open source acquisition involves procuring, verbal, written, or electronically transmitted material that can be obtained legally. In addition to documents and videos available via the Internet or provided by a human source, others are obtained after U.S. or allied forced have taken control of a facility or site formerly operated by a foreign government or terrorist group.”[6]

Security researcher Mark M. Lowenthal defines OSINT as “any and all information that can be derived from overt collection: all types of media, government reports and other documents, scientific research and reports, commercial vendors of information, the Internet, and so on. The main qualifiers to open-source information are that it does not require any type of clandestine collection techniques to obtain it and that it must be obtained through means that entirely meet the copyright and commercial requirements of the vendors were applicable."[7] 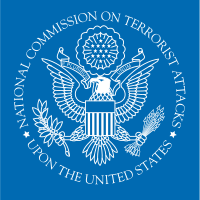 Seal of the 9/11 Commission

OSINT in the United States traces its origins to the creation of the Foreign Broadcast Monitoring Service (FBMS), an agency responsible for the monitoring of foreign broadcasts. An example of their work is reflected in the application of the correlation of changes in the price of oranges in Paris with that of railway bridges being bombed successfully.[8]

The Aspin-Brown Commission stated in 1996 that US access to open sources was "severely deficient" and that this should be a "top priority" for both funding and DCI attention.[9]

Following these recommendations, in November 2005 the Director of National Intelligence announced the creation of the DNI Open Source Center. The Center was established to collect information available from "the Internet, databases, press, radio, television, video, geospatial data, photos and commercial imagery."[11] In addition to collecting openly available information, it would train analysts to make better use of this information. The Center absorbed the CIA's previously existing Foreign Broadcast Information Service (FBIS), originally established in 1941, with FBIS head Douglas Naquin named as director of the Center.[12] Then, following the events of 9/11 the Intelligence Reform and Terrorism Prevention Act merged FBIS and other research elements into the Office of the Director of National Intelligence creating the Open Source Enterprise.

A main hindrance to practical OSINT is the volume of information it has to deal with ("information explosion"). The amount of data being distributed increases at a rate that it becomes difficult to evaluate sources in intelligence analysis.

Accredited journalists have some protection in asking questions, and researching for recognized media outlets. Even so, they can be imprisoned, even executed, for seeking out OSINT. Private individuals illegally collecting data for a foreign military or intelligence agency is considered espionage in most countries. Of course, espionage that is not treason (i.e. betraying one's country of citizenship) has been a tool of statecraft since ancient times.[17]

OSINT is valuable because it has less rigorous processing and exploitation processes and timelines than more technical intelligence disciplines such as HUMINT, SIGINT, MASINT, GEOINT, etc. Additionally, OSINT collects a valuable variety of opinions because it encompasses a great variety of sources.

According to the Commission on the Intelligence Capabilities of the United States Regarding Weapons of Mass Destruction report submitted in March 2005, OSINT must be included in the all-source intelligence process for the following reasons (as stated in the report):

OSINT is a highly diverse form of intelligence collection and analysis. It does not have its own agency, however, units are scattered within the Department of Defense and the State Department.[19] Most OSINT collectors need to take precautions while collecting information from the Internet. This can come in the form of using a VPN to anonymize their identity and collect information more discreetly. This is where evaluating sources becomes important to the overall OSINT collection and analysis process. An OSINT analyst needs intelligence evaluation to determine a true process or expose a false process that would affect predicting the future. Finally, the analysts need to find use of the evaluated intelligence so that it can be incorporated into a finished classified, unclassified, or proprietary intelligence product.

Information collection in OSINT is generally a different problem from collection in other intelligence disciplines where obtaining the raw information to be analyzed may be the major difficulty, particularly if it is to be obtained from non-cooperative targets. In OSINT, the chief difficulty is in identifying relevant, reliable sources from the vast amount of publicly available information.[20] However, this is not as great a challenge for those who know how to access local knowledge and how to leverage human experts who can create new tailored knowledge on the fly.[citation needed]

The Library of Congress sponsors the Federal Research Division (FRD) which conducts a great deal of tailored open-source research on a fee-for-service basis for the executive branch.

Prior to the establishment of the National Open Source Enterprise, the Foreign Broadcast Information Service (FBIS), established in 1941, was the government's primary open-source unit, transcribing and translating foreign broadcasts. It absorbed the Defense Department's Joint Publications Research Service (JPRS), which did a similar function with foreign printed materials, including newspapers, magazines, and technical journals.

U.S. military offices that engage in OSINT activities include:

The law enforcement OSINT community applies open-source intelligence (OSINT) to the prediction, prevention, investigation, and prosecution of criminals including terrorists. Additionally, fusion centers around the US are increasingly utilizing OSINT to support their intelligence generation and investigations.

INTERPOL and EUROPOL experimented with OSINT units for a time, but they appear to have atrophied with the departure of their individual champions.

New York Police Department (NYPD) is known to have an OSINT unit, as does the Los Angeles County Sheriff's Department, housed within the Emergency Operations Bureau and affiliated with the LA Joint Regional Intelligence Center.

Businesses may use information brokers and private investigators to collect and analyze relevant information for business purposes which may include the media, deep web, web 2.0 and commercial content.

Another related business group within the United States that relies upon OSINT is the commercial Bail Bond industry. This related industry, servicing the court system, is apart from the above Business Intelligence sector. OSINT is useful to Bail Bond agencies that employ a private Fugitive Recovery Agency to locate and apprehend their absent client;i.e., a criminal defendant who has failed to appear for court and subsequently a warrant for arrest was issued. OSINT is the first method of discovery to help locate the defendant when initial interviewing of the bond co-signers, defendant's relatives and friends is lacking. OSINT gathering leads the investigator to discover an alternate hypothesis to analyze and then match relevant data for making a prediction regarding the fugitive's location; e.g., data is scrubbed from web access on Facebook entries, Twitter messages, and Snapchat.

Should those methods fail, the next step is to seek the specialized Behavioral Intelligence services that reference OSINT to aid in establishing the veracity of subjects during the forensic interview and is used to create a behavioral profile. OSINT data is correlated with interview data to include a variety behavioral patterns; e.g., a list of daily personal contacts, habits of activities, visited places of interest, vehicles used, favorite group involvements, etc. According to the Director, psychologist and forensic interviewer at MN-Behavioral Intelligence Agency, (2016) OSINT data base has to be critically filtered and analyzed before it can be applied within investigative interviewing and interrogation.