Open carry in the United States

In the United States, open carry refers to the practice of "openly carrying a firearm in public", as distinguished from concealed carry, where firearms cannot be seen by the casual observer.

The practice of open carry, where gun owners openly carry firearms while they go about their daily business, has seen an increase in the U.S. in recent years.[1][2] This has been marked by a number of organized events intended to increase the visibility of open carry and public awareness about the practice.[3] Proponents of open carry point to history and statistics, noting that criminals usually conceal their weapons, a stark contrast to the law-abiding citizens who display their sidearms.[4] Encouraged by groups like The Modern American Revolution,[5] OpenCarry.org, GeorgiaCarry.org and some participants of the Free State Project, open carry has seen a revival in recent years,[6][7][8] but it is not yet clear if this represents just a short-term trend.[9][10]

The gun rights community has become supportive of the practice. Alan Gottlieb of the Second Amendment Foundation has been cautious in expressing support,[11] while special-interest groups such as the aforementioned OpenCarry.org and GeorgiaCarry.org, and certain national groups such as the NRA and Gun Owners of America (GOA) have been more outspoken in favor of the practice.

Open carry is strongly opposed by gun control groups such as the Brady Campaign and the Coalition to Stop Gun Violence.[12][13] 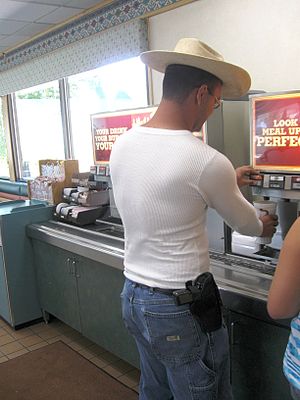 A man openly carrying a handgun at a fast food restaurant in Eagle, Colorado.

Open carry
The act of publicly carrying a firearm on one's person in plain sight.
Plain sight
Broadly defined as not being hidden from common observation; varies somewhat from state to state. Some states specify that open carry occurs when the weapon is "partially visible," while other jurisdictions require the weapon to be "fully visible" to be considered carried openly.
Loaded weapon
Definition varies from state to state. Depending on state law, a weapon may be considered "loaded" under one of the following criteria:

Preemption
In the context of open carry: the act of a state legislature passing laws which limit or eliminate the ability of local governments to regulate the possession or carrying of firearms.
Prohibited persons
This refers to people who are prohibited by law from carrying a firearm. Typical examples are felons, those convicted of a misdemeanor of domestic violence, those found to be addicted to alcohol or drugs, and those who have been involuntarily committed to a mental institution.

Today in the United States, the laws vary from state to state regarding open carry of firearms. The categories are defined as follows:

A hunter carrying a revolver in a visible rear holster.

Jurisdictions in the United States

In the United States, the laws concerning open carry vary by state and sometimes by municipality. The following chart lists state policies for openly carrying a loaded handgun in public.

Open carry has never been ruled out as a right under the Second Amendment of the U.S. Constitution by any court. In the majority opinion in the case of District of Columbia v. Heller (2008), Justice Antonin Scalia wrote concerning the entirety of the elements of the Second Amendment; "We find that they guarantee the individual right to possess and carry weapons in case of confrontation." However, Scalia continued, "Like most rights, the Second Amendment right is not unlimited. It is not a right to keep and carry any weapon whatsoever in any manner whatsoever and for whatever purpose."[39]

Forty five states' constitutions recognize and secure the right to keep and bear arms in some form, and none of those prohibit the open carrying of firearms. Five state constitutions provide that the state legislature may regulate the manner of carrying or bearing arms, and advocates argue that none rule out open carry specifically. Nine states' constitutions indicate that the concealed carrying of firearms may be regulated and/or prohibited by the state legislature.[40] Open carry advocates argue that, by exclusion, open carrying of arms may not be legislatively controlled in these states. But this is not settled law.[citation needed]

In 2015, former Florida congressman Allen West opined, regarding the 2015 Supreme Court decision in Obergefell v. Hodges, "Using the same 'due process clause' argument as the Supreme Court just applied to gay marriage, my concealed carry permit must now be recognized as valid in all 50 states and the District of Columbia.“[42] This opinion echoes reasoning contained in an Amicus curiae brief in Obergefell.[43]

State laws on open carry vary widely. Five states, the Territory of the U.S. Virgin Islands and the District of Columbia fully prohibit the open carry of handguns. On the other side, twenty-five states permit open carry of a handgun without requiring the citizen to apply for any permit or license. Fifteen states require some form of permit (often the same permit as allows a person to carry concealed), and the remaining five states, though not prohibiting the practice in general, do not preempt local laws or law enforcement policies, and/or have significant restrictions on the practice, such as prohibiting it within the boundaries of an incorporated urban area. Illinois allows open carry on private property only.[68]

On October 11, 2011, California Governor Jerry Brown signed into law that it would be a "misdemeanor to openly carry an exposed and unloaded handgun in public or in a vehicle." This does not apply to the open carry of rifles or long guns or persons in rural areas where permitted by ordinance.

On November 1, 2011, Wisconsin explicitly acknowledged the legality of open carry by amending its disorderly conduct statute (Wis. Stat. 947.01). A new subsection 2 states "Unless other facts and circumstances that indicate a criminal or malicious intent on the part of the person apply, a person is not in violation of, and may not be charged with a violation of, this section for loading, carrying, or going armed with a firearm, without regard to whether the firearm is loaded or is concealed or openly carried."

On May 15, 2012, Oklahoma Governor Mary Fallin signed Senate Bill 1733, the Oklahoma Self Defense Act, which will allow people with Oklahoma concealed weapons permits to open carry if they so choose. The law took effect in November, 2012. "Under the measure, businesses may continue to prohibit firearms to be carried on their premises. SB 1733 prohibits carrying firearms on properties owned or leased by the city, state or federal government, at corrections facilities, in schools or college campuses, liquor stores and at sports arenas during sporting events."[69]

The Federal Gun Free School Zones Act limits where a person may legally carry a firearm by generally prohibiting carry within 1000 ft of the property line of any K-12 school in the nation, with private property excluded.[70] A state-issued permit to carry may exempt a person from the restriction depending on the laws of the state, and most issuing states qualify for the exception. However, according to the Bureau of Alcohol, Tobacco, Firearms and Explosives, the exception in federal law is inapplicable to permit holders outside the state that physically issued their permit, and it does does not exempt people with out-of-state permits even if the permit is recognized by state reciprocity agreements. BATFE letter explaining reciprocity of CCW permit holders and how it applies to Gun-Free School Zones.

In a 1995 Supreme Court case, the Act was declared unconstitutional: "The Court today properly concludes that the Commerce Clause does not grant Congress the authority to prohibit gun possession within 1,000 feet of a school, as it attempted to do in the Gun-Free School Zones Act of 1990, Pub. L. 101-647, 104 Stat. 4844." [71]