Operation Dragon Rouge (French: Opération Dragon rouge, Dutch: Operatie Rode Draak) was a hostage rescue operation in the Democratic Republic of the Congo conducted by Belgium and the United States in 1964. The operation, relying heavily on paratroopers from the Belgian Paracommando Regiment, aimed to retrieve hostages held by Communist Simba rebels in Stanleyville (modern-day Kisangani).

By 1964, the Léopoldville government, supported by Western powers, was gaining a foothold in its fight to suppress the communist-backed Simba rebellion. Fearing an inevitable defeat, the rebels resorted to taking hostages of the local white population in areas under their control. Several hundred hostages were taken to Stanleyville and placed under guard in the Victoria Hotel. 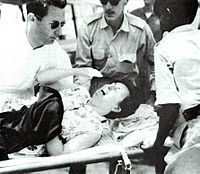 Traumatized hostage is transported to a departing aircraft

The Léopoldville government turned to Belgium and the United States for help. In response, the Belgian army sent a task force to Léopoldville, airlifted by the U.S. Air Force 322nd Air Division. Washington and Brussels worked jointly on a rescue plan. Several ideas were considered and discarded, and all attempts at negotiating with the Simbas had failed.

The Belgian task force was led by the Col. Charles Laurent.[1] On 24 November 1964, five American C-130 Hercules planes dropped 350 Belgian paratroopers of the Paracommando Regiment onto the airfield at Stanleyville.[2] Once the paratroopers had secured the airfield and cleared the runway they made their way to the Victoria Hotel, prevented Simbas from killing most of the 60 hostages, and evacuated them via the airfield. Over the next two days over 1,800 American, Belgian and other European civilians were evacuated as well as around 400 Congolese civilians[citation needed]. Almost 200 foreigners and thousands of Congolese were executed by the Simbas before and after the raid.[3]

An American medical missionary, Dr. Paul Carlson, was among those killed during the raid. 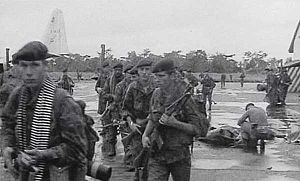 Belgian paratroopers on Stanleyville airfield after the operation

The operation coincided with the arrival of Armée Nationale Congolaise (ANC) and other foreign mercenary units –which likely included the hastely-formed 5th Mechanised Brigade and Mike Hoare's 5 Commando ANC– at Stanleyville which was quickly captured. It took until the end of the year to completely put down the remaining areas of the Simba rebellion.

Despite the success of the raid, Moise Tshombe's prestige was damaged by the joint Belgian-U.S. operation which saw white mercenaries and Western forces intervene once again in the Congo. In particular, Tshombe had lost the support of President Joseph Kasa Vubu and Chief of the Army Joseph-Desiré Mobutu and was dismissed from his post as prime minister in October 1965.

On 11 December, the Belgian politician Paul-Henri Spaak was called to the United Nations to respond to accusations of neocolonialism and imperialism by Eastern Bloc countries..