Operation Market Time was one of four Navy duties begun after the Tonkin Gulf Incident, along with Operation Sea Dragon, Operation Sealords and naval gunfire support. 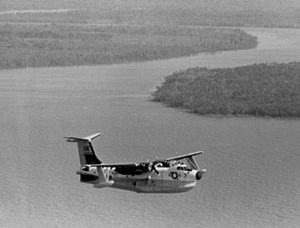 When a trawler was intercepted landing arms and ammunition at Vung Ro Bay in northern Khánh Hòa Province on 16 February 1965 it provided the first tangible evidence of the North Vietnamese supply operation. This became known as the Vung Ro Bay Incident.

North Vietnamese mine laying ships attempted to close the entrance to the bay but were turned back by U.S. Marine helicopters modified with anti-ship missiles launching close range attacks on the vessels, encountering intense machine gun fire from North Vietnamese commandos on the decks of the ships.

U.S. Navy Martin P-5 Marlin seaplane patrol squadrons, destroyers, ocean minesweepers, PCFs (swift boats) and United States Coast Guard cutters (USCGC) performed the operation. Also playing a key role in the interdictions were the Navy’s patrol gunboats (PGs). The PG was uniquely suited for the job because of its ability to go from standard diesel propulsion to gas turbine (jet engine) propulsion in a matter of a few minutes. The lightweight aluminum and fiberglass ships were not only fast but highly maneuverable because of their variable-pitch propellers. Most of the ships operated in the coastal waters from the Cambodian border around the south tip of Vietnam up north to Đà Nẵng. Supply ships from the Service Force, such as oilers, would bring mail, movies, and fuel. 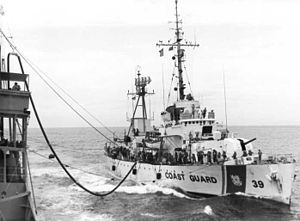 Of the many vessels involved in Operation Market Time, one of the more notable was the USCGC Point Welcome (WPB-82329) which, on 11 August 1966, was brought under fire by a number of United States Air Force aircraft. This incident of a "blue-on-blue" engagement killed two members of the cutter’s crew (one of whom was the commanding officer) and wounded nearly everyone on board.[1]

Operation Market Time was established by the United States Joint Chiefs of Staff after the 1965 Vung Ro incident to blockade the vast South Vietnam coastline against North Vietnamese gun-running trawlers. The trawlers, usually 100-foot-long Chinese-built steel-hulled coastal freighters, could carry several tons of arms and ammunition in their hulls. Not flying a national ensign that would identify them, the ships would maneuver “innocently” out in the South China Sea, waiting for the cover of darkness to make high-speed runs to the South Vietnam coastline. If successful, the ships would off load their cargoes to waiting Việt Cộng or North Vietnamese forces.

To stop these potential infiltrations, Market Time was set up as a coordinated effort of long range patrol aircraft for broad reconnaissance and tracking. These aircraft, initially SP-5B seaplanes, later Lockheed P-2 Neptune and Lockheed P-3 Orions, were armed with Bullpup air-to-surface missiles and were therefore capable of engaging these craft directly. Under normal conditions, however U.S. and allied surface forces intercepted suspect ships that crossed inside South Vietnam’s 12-mile coastal boundary. On the aviation side, some of the patrol squadrons that were involved and flying from South Vietnam, Thailand, or Philippine bases were: VP-1, VP-2, VP-4, VP-6, VP-8, VP-16, VP-17, VP-22, VP-26, VP-28, VP-40, VP-42, VP-45, VP-46, VP-47,VP-48, VP-49 and VP-50.

A significant action of Market Time occurred on 1 March 1968, when the North Vietnamese attempted a coordinated infiltration of four gun-running trawlers. Two of the four trawlers were destroyed by allied ships in gun battles, one trawler crew detonated charges on board their vessel to avoid capture, and the fourth trawler turned tail and retreated at high speed into the South China Sea. LT Norm Cook, the patrol plane commander of a VP-17 P-2H Neptune patrol aircraft operating from Cam Ranh Bay, was awarded a Distinguished Flying Cross for discovering and following two of the four trawlers in the action.

Market Time, which operated day and night, fair weather and foul, for eight and a half years, succeeded in denying the North Vietnamese a means of delivering tons of war materials into South Vietnam by sea.