Operation Ocean Shield is NATO's contribution to Operation Enduring Freedom - Horn of Africa (OEF-HOA), an anti-piracy initiative in the Indian Ocean, following the earlier Operation Allied Protector. Naval operations began on 17 August 2009 after being approved by the North Atlantic Council. Operation Ocean Shield focuses on protecting the ships of Operation Allied Provider, which are transporting relief supplies as part of the World Food Programme's mission in the region. The initiative also helps strengthen the navies and coast guards of regional states to assist in countering pirate attacks. Additionally, China and South Korea have sent warships to participate in the activities.

The US Navy has been the largest contributor of ships followed by the Indian Navy.[4][5] The fleet of ships is on rotation and is led by a designated leadship. The role of leadship is rotated among the various countries involved. Current leadship as of October 2015 is Turkish Frigate TCG GEDIZ.[6]

On 10 January 2010, Admiral Pereira da Cunha, of the Portuguese Navy held a meeting regarding piracy with the Puntland coast guard. It was held aboard the frigate NRP Álvares Cabral near Bosaso, Somalia and focused on human intelligence gathering, capacity building and counter piracy cooperation between NATO and Puntland authorities.[5]

USS Leyte Gulf alongside USS Enterprise in the Red Sea in March 2011.

Pirates attacked the Panamanian flagged merchantman MV Almezaan on 25 March. One pirate was killed by Almezaan's crew during the boarding and shortly afterwards the Spanish Navy frigate Navarra arrived and launched a helicopter. Warning shots were then fired and the pirates surrendered without further conflict. Six pirates were taken prisoner for a short time before being released in two skiffs and the mother ship was sunk by gunfire.[7]

The small Seychelles Coast Guard patrol boat Topaz engaged in another battle with pirates five days later on 30 March. While patrolling just off the coast of Somalia, Topaz encountered a captured dhow. After warning shots were fired, the dhow seemed to ignore the patrol boat and its occupants eventually opened up with rocket-propelled grenades and small arms fire. The Seychellois then engaged and after shooting off 10,000 rounds of machine gun fire, the dhow was burning and eventually sank. Twenty-seven members of the dhow's crew were rescued and the Topaz was returning to base when she was attacked by a trawler and two skiffs. Again the Seychellois responded with counter battery and the trawler exploded. One of the skiffs was sunk as well. Pirate casualties are unknown and one member of the dhow's crew was wounded.[8]

USS Nicholas was attacked by a skiff on 1 April, while in the waters between the Seychelles and Kenya. The Americans returned fire briefly and three pirates surrendered. Nicholas then pursued a mother ship vessel for a while, a boarding team was put on the ship and it was captured. A little later that day, USS Farragut was also operating in the area and she captured thirteen more pirates. This was following the attempted seizure of the Sierra Leone flagged tanker MV Evita. The crew of the tanker defended their ship with flares and outmaneuvered the pirates.[9] 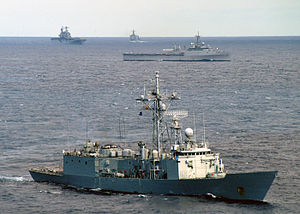 Operation Dawn of Gulf of Aden was launched by Republic of Korea Navy commandos with support from Oman and the United States in January 2011. Following the capture of the Norwegian owned chemical tanker MV Samho Jewelry on 15 January off Muscat with its crew of twenty-one, a failed boarding action was carried out on 18 January which resulted in the wounding of three commandos. A second attempt on 21 January succeeded in freeing the ship and the captives while eight pirates were killed altogether.[10]

A failed rescue operation was carried out by the Danish frigate HDMS Esbern Snare and a Seychellois Coast Guard patrol boat on 26 January. MV Beluga Nomination was taken over four days before and the attackers cut into the freighter's citadel with a blow torch to get at the crew. The Seychelles patrol boat and Esbern Snare were dispatched and when they found the pirates and engagement began. Boarding teams from the patrol boat were repulsed but the Seychellois were able to kill one or two of the pirates. Two of Beluga Nomination's crew managed to escape in a lifeboat and were rescued by the Danish though four others were killed either by drowning or the pirates. Ultimately the operation was aborted and the pirates sailed away with the tanker and seven remaining hostages.[11] 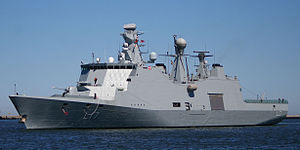 The Quest incident occurred in February 2011. In the first attack on an American private ship since the Maersk Alabama hijacking in 2009, the yacht SV Quest was taken over by nineteen pirates on 4 February. The United States Navy responded by dispatching the aircraft carrier USS Enterprise, the guided missile cruiser USS Leyte Gulf and the guided missile destroyers USS Bulkeley and USS Sterett to release the four captives. The ships found Quest on or about 21 January off the coast of Oman and negotiations to free the hostages began. However, on the following day, the pirates opened fire on USS Sterret with rocket propelled grenades and shortly thereafter small arms fire was heard. The American commander then ordered a team to board the yacht and after doing so, all four of the prisoners were found to have been killed by the pirates. Fifteen pirates were taken into custody and two of them were killed in the boarding action. The bodies of two other pirates were also found but American officials have no explanation for the cause of their deaths.[12]

On 5 May 2011, as part of Operation Ocean Shield, the aircraft carrier USS Carl Vinson, the guided-missile cruiser USS Bunker Hill, and the Turkish frigate TCG Giresun responded to a distress call from the Panamanian-flagged, Chinese-owned bulk carrier MV Full City. An Indian Navy Tu-142 maritime patrol aircraft located Full City, and while TCG Giresun boarded the merchant vessel, USS Bunker Hill and its embarked helicopters intercepted a dhow believed to be the 'mothership' for the pirate attack. Bunker Hill's VBSS boarding party seized weapons and other equipment commonly used in piracy, and the boarding party also sank a small skiff being towed by the dhow. Giresun's boarding party found Full City's Chinese crew safe and in control of their ship.[13][14][15] 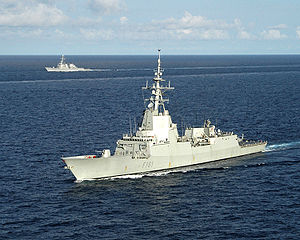 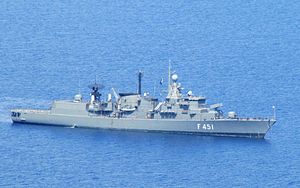 In addition to the frigate HNoMS Fridtjof Nansen (F310), Norway has previously had a Lockheed P-3 Orion involved in the operation.