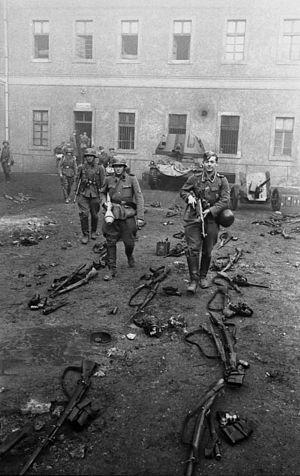 Operation Panzerfaust, known as Unternehmen Panzerfaust in Germany, was a military operation to keep the Kingdom of Hungary at Germany's side in the war, conducted in October 1944 by the German military (Wehrmacht). When German dictator Adolf Hitler received word that Hungary's Regent, Admiral Miklós Horthy, was secretly negotiating his country's surrender to the advancing Red Army, he sent commando leader Waffen-SS Lieutenant-Colonel Otto Skorzeny and former Brandenburger Adrian von Fölkersam to Hungary. Hitler feared that Hungary's surrender would expose his southern flank, where the Kingdom of Romania had just joined with the Soviets and cut off a million German troops still fighting the Soviet advance in the Balkan peninsula. The operation came on the heels of Operation Margarethe in March 1944, which was occupation of Hungary by German forces, which Hitler had hoped would secure Hungary's place in the Axis powers.[1]

Having anticipated Horthy's move, Skorzeny had been instructed to remove Horthy from power. Horthy's son Miklós Horthy, Jr. was meeting with Soviet representatives. Miklós Jr. was informed by the German Security Service through intermediaries that envoys of Marshal Tito of Yugoslavia wanted to meet with him. Miklós Jr. had failed to keep a prior meeting when he observed suspicious individuals near the proposed meeting place. A second meeting was set for early 15 October at the offices of Felix Bornemisza, the Director of the Hungarian Danube ports. He hoped that the Yugoslavian representatives might have important news, but upon entering the building, Skorzeny and his troops attacked and beat him into submission. They then kidnapped Miklós at gunpoint, trussed him up in a carpet, immediately drove him to the airport and flew him to Vienna. From there, he was transported to the concentration camp at Mauthausen.[2]

Working through his trustworthy General Béla Miklós, who was in contact with Soviet forces in eastern Hungary, Horthy attempted to negotiate the end of the war, seeking to surrender to the Soviets while preserving the government's autonomy. Although Horthy was an intractable anti-Communist, his dealings with the Nazis led him to conclude the Soviets were the lesser evil. The Soviets willingly promised that Hungary would remain autonomous and sovereign.

Horthy governed from Castle Hill in central Budapest, an ancient and now well-guarded fortress. He blamed the German government for "forcing" Hungary into war, and during a meeting of the Crown Council declared that:

Today it is obvious to any sober-minded person that the German Reich has lost the war. All governments responsible for the destiny of their countries must draw the appropriate conclusions from this fact, for as a great German statesman, Bismarck, once said, "No nation ought to sacrifice itself on the altar of an alliance." … I decided to safeguard Hungary’s honour even against her former ally, although this ally, instead of supplying the promised military help, meant finally to rob the Hungarian nation of its greatest treasure, its freedom and independence. I informed a representative of the German Reich that we were about to conclude a military armistice with our former enemies and to cease all hostilities against them.[2]

At 2:00 p.m. on 15 October 1944, Horthy announced in a national radio broadcast that Hungary had signed an armistice with the Soviets. However, the Germans had been aware of Horthy's behind-the-scenes maneuvering and had already set in motion plans to replace his government with forces loyal to the German cause, effectively occupying Hungary. With Nazi help, the Arrow Cross Party seized the radio station shortly after Horthy signed off. A party member wrote a counter-proclamation and used the name of the Hungarian Army's Chief of the General Staff, General Vörös. The commanding officer and his assistant of the two remaining Hungarian army units in Budapest were arrested or disappeared, and their soldiers fell in line with the Arrow-Cross party.[2]

Failure of the Hungarian Army to respond

Given that many Hungarian units were controlled by the German army, it is unclear whether orders, if issued, ever reached most of the line troops. The knowledge about the harsh, punitive treatment of prisoners by the Soviets was also known. 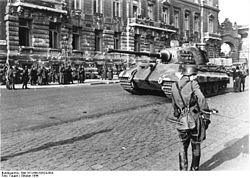 Skorzeny then brazenly led a convoy of German troops and four Tiger II tanks to the Vienna Gates of Castle Hill. Horthy recognized that he had no means to fight the German armor and superior forces. He issued orders that "no resistance should be made."[2]:290 One unit did not get these orders, and fought the Germans for about 30 minutes. The Germans quickly and with minimal bloodshed captured Castle Hill. Only seven soldiers were killed and 26 men were wounded.[3][dead link][unreliable source?]

Horthy was taken into custody by Edmund Veesenmayer and his staff later on 15 October. Kept overnight in the Waffen SS offices, he returned to the Palace to collect his personal belongings. There he was confronted with a demand to sign a typewritten statement handed to him by Premier Géza Lakatos. The statement announced that Horthy was renouncing the armistice and abdicating in favour of Arrow Cross leader Ferenc Szálasi. Surprised that his loyal friend would encourage him to sign the document, Horthy was told by Lakatos that his son's life was at stake. When Horthy asked Veesenmayer if this was true, Veesenmayer confirmed the threat. The regent understood that this was an effort to put the stamp of his prestige on a Nazi-sponsored Arrow Cross coup, but signed anyway.[2]

Horthy later explained his capitulation: "I neither resigned nor appointed Szálasi Premier, I merely exchanged my signature for my son’s life. A signature wrung from a man at machine-gun point can have little legality."[2]

Despite Veesenmayer's solemn promise to obtain Horthy's son's release from the German concentration camp, Miklós Jr. remained a prisoner until the war's end on 8 May 1945. Horthy himself was transported to the Schloss Hirschberg near Weilheim, Germany, and guarded by 100 Waffen SS men at all times. On 1 May 1945, Lt. Gen. Alexander Patch, the commander of the US 7th Army, visited Horthy in his castle prison. Because Hungary had fought on to the end defending Germany, Horthy was considered a prisoner of war. Seven months later, on 17 December 1945, he was released from the Nuremberg penitentiary and was reunited with his family in a private home in Weilheim.[2]