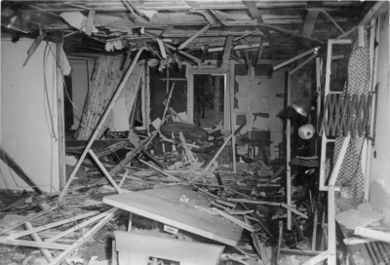 The Wolfsschanze after the bomb

Operation Valkyrie (German: Unternehmen Walküre) was a German World War II emergency continuity of government operations plan issued to the Territorial Reserve Army of Germany to execute and implement in case of a general breakdown in civil order of the nation. Failure of the government to maintain control of civil affairs might have been caused by the Allied bombing of German cities, or uprising of the millions of foreign forced laborers working in German factories.

German Army (Heer) officers, General Friedrich Olbricht, Major General Henning von Tresckow and Colonel Claus von Stauffenberg modified the plan with the intention of using it to take control of German cities, disarm the SS, and arrest the Nazi leadership once Hitler had been assassinated in the 20 July plot. Hitler's death (as opposed to his arrest) was required to free German soldiers from their oath of loyalty to him (Reichswehreid). After lengthy preparation, the plot was activated in 1944, but failed. 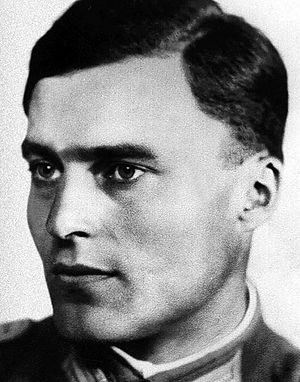 The original plan, designed to deal with internal disturbances in emergency situations, was developed by General Friedrich Olbricht's staff in his capacity as head of General Army Office and was approved by Hitler.[1]

The idea of using the Reserve Army in the German homeland for a potential coup existed before, but apart from Hitler himself, only Colonel-General Friedrich Fromm, Chief of the Reserve Army since 1938, could initiate Operation Valkyrie. Fromm's refusal to co-operate in a prospective coup posed a serious obstacle to the conspirators. Nevertheless, after the lessons of a failed assassination attempt on 13 March 1943, Olbricht felt that the original coup plan was inadequate and that the Reserve Army should be used in the coup even without Fromm's co-operation. 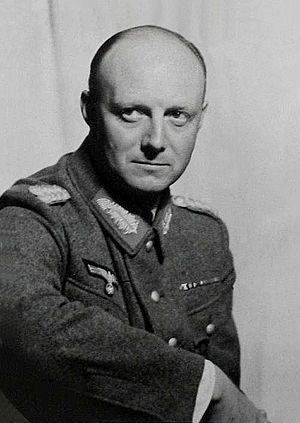 The original Valkyrie order only dealt with strategy to ensure combat readiness of units among scattered elements of the Reserve Army. Olbricht added a second part, 'Valkyrie II', which provided for the swift mustering of units into battle groups ready for action.

In August and September 1943, Henning von Tresckow found Olbricht's revision inadequate, and thus greatly expanded the Valkyrie plan and drafted new supplementary orders. A secret declaration began with the words: "The Führer Adolf Hitler is dead! A treacherous group of party leaders has attempted to exploit the situation by attacking our embattled soldiers from the rear to seize power for themselves".

Detailed instructions were written for occupation of government ministries in Berlin, of Himmler's headquarters in East Prussia, of radio stations, of telephone exchanges, of other Nazi infrastructure through military districts and of concentration camps.[1] (Previously, it was believed that Colonel Claus Schenk von Stauffenberg was mainly responsible for the Valkyrie plan, but documents recovered by the Soviet Union after the war and released in 2007 suggest that a detailed plan was developed by Tresckow in autumn 1943.)[2] All documents were handled by Tresckow's wife, Erika, and by Margarete von Oven, his secretary. Both women wore gloves to leave no fingerprints.[3]

In essence, the coup plan involved tricking the Reserve Army into the seizure and removal of the civilian government of wartime Germany under the false pretence that the SS had attempted a coup and assassinated Hitler. The conspirators depended on the assumption that the rank-and-file soldiers and junior officers designated to execute Operation Valkyrie would be motivated to do so on the basis of their false belief that the Nazi civilian leadership had behaved with disloyalty and treason against the state, and were therefore required to be removed. The conspirators counted on the soldiers to obey their orders as long as they came from the legitimate channel—namely, the Reserve Army High Command—in the emergency situation following Hitler's putative death.

Apart from Hitler, only Colonel-General Friedrich Fromm, as commander of the Reserve Army, could activate Operation Valkyrie. For the planned coup to succeed, therefore, the plotters had either to win Fromm over to the conspiracy, or to neutralize him in some way. Fromm, like many senior officers, largely knew about the military conspiracies against Hitler, but neither supported them nor reported them to the Gestapo.

The key role in its actual implementation was played by Colonel Claus Schenk Graf von Stauffenberg, after his assassination attempt on Hitler on 20 July 1944. Stauffenberg also further improved the Valkyrie plan and made changes to address changing situations. Stauffenberg's position as Chief of Staff of the Reserve Army gave him access to Hitler for reports and at the same time required his presence at headquarters for implementation of Valkyrie. At first, Tresckow and Stauffenberg sought out other officers with access to Hitler who could carry out the assassination.[4]

General Helmuth Stieff, Chief of Organization in Army High Command, volunteered to be the assassin but later backed down. Tresckow attempted several times to be assigned to Hitler's headquarters without success. Finally, Stauffenberg decided to carry out both the assassination attempt and the Valkyrie operation, which greatly reduced the chance of success. After two abortive attempts, Stauffenberg placed the bomb on 20 July and hurried back to Berlin to assume his pivotal role.

Discovering from Field Marshal Wilhelm Keitel that the bomb had not killed Hitler, Fromm refused to initiate Valkyrie, only to know that General Friedrich Olbricht had initiated in his name; refusing to co-operate, he was removed and arrested by the conspirators and replaced by General Erich Hoepner. Meanwhile, Carl-Heinrich von Stülpnagel, military governor of occupied France, managed to disarm the SD and SS, and captured most of their leadership. He travelled to Günther von Kluge's headquarters and asked him to contact the Allies, only to be informed that Hitler was alive.

By this time Reichsfüher-SS Heinrich Himmler had taken charge of the situation and had issued orders countermanding Olbricht's mobilisation of Operation Valkyrie. This led to the failure of the coup, with most of the commanding officers learning that Hitler was alive and cancelling their operations.

When it was clear that the coup had failed, the less resolute members of the conspiracy in Berlin began to change sides. Fromm was freed from his detention room and, after a brief fight, he managed to regain control of the Bendlerblock. In a desperate attempt to cover his involvement, he ordered the executions of General Friedrich Olbricht, his chief of staff Colonel Albrecht Mertz von Quirnheim, Colonel Claus von Stauffenberg and his adjutant Lieutenant Werner von Haeften. Shortly after midnight, the condemned men were led to a mound of earth back-lit by idling vehicles where each was executed by firing squad in the courtyard of Bendlerstraße headquarters, the street has been renamed Stauffenbergstraße in honour of Colonel Stauffenberg. Further executions were forbidden following the arrival of Waffen-SS personnel under the command of Obersturmbannfüher Otto Skorzeny.[5]

Initial order to the Wehrkreise

I. The Führer Adolf Hitler is dead!

An unscrupulous clique of party leaders alien to the front has attempted, under the exploitation of this situation, to betray the hard-struggling front and to seize power for their own selfish purposes.

II. In this hour of greatest danger, the government of the Reich has declared a state of military emergency for the maintenance of law and order and at the same time has transferred the executive power, with the supreme command of the Wehrmacht, to me.

III. With this, I order:

a) all sections and units of the Wehrmacht, including the Waffen-SS, RAD and the OT, within their area of command;
b) all public authorities (of the Reich, Germany, the states and the municipalities), especially the entire law enforcement police, security police and administrative police;
c) all office bearers and subdivisions of the NSDAP and those of its affiliated associations;
d) the transportation services and public utilities

3. The entire Waffen-SS is integrated into the army with immediate effect.
4. The holders of executive power are responsible for the maintenance of public order and security. They especially have to ensure:

a) the protection of communications
b) the elimination of the SD (Security Service).

Any opposition to the military power of enforcement is to be ruthlessly crushed.
In this hour of highest danger for the Fatherland, unity of the Wehrmacht and the maintenance of full discipline are the uppermost requirements.
That is why I make it the duty of all commanders of the army, the navy and the air force to support the holders of executive power in carrying out their difficult task with all means at their disposal and to guarantee the compliance of their directives by the subordinate sections. The German soldier stands before a historical task. It will depend on his energy and attitude whether Germany will be saved.