Opuntia ficus-indica is a species of cactus that has long been a domesticated crop plant important in agricultural economies throughout arid and semiarid parts of the world. It is thought to possibly be native to Mexico.[1] Some of the common English names for the plant and its fruit are Indian fig opuntia, Barbary fig, cactus pear, spineless cactus, and prickly pear, although this last name has also been applied to other less common Opuntia species. In Mexican Spanish, the plant is called nopal, while the fruit is called tuna, which are names also used in American English, especially as culinary terms.

Fig opuntia is grown primarily as a fruit crop, but also for the vegetable nopales and other uses. Most culinary references to the "prickly pear" are referring to this species. The name "tuna" is also used for the fruit of this cactus, and for Opuntia in general; according to Alexander von Humboldt, it was a word of Hispaniola native origin taken into the Spanish language around 1500.[2]

Cacti are good crops for dry areas because they efficiently convert water into biomass. O. ficus-indica, as the most widespread of the long-domesticated cactuses, is as economically important as maize and blue agave in Mexico today. Because Opuntia species hybridize easily (much like oaks), the wild origin of O. ficus-indica is likely to have been in Mexico due to the fact that its close genetic relatives are found in central Mexico.[3]

Opuntia ficus-indca is polyploid, hermaphrodite and autogamous.[4] As the Opuntia species grow in semi-arid environments, the main limiting factor in their environment is water. Opuntia spp. have developed a number of adaptations to dry conditions, notably succulence.[5]

The perennial shrub Opuntia ficus-indica can grow up to 3-5m height, with thick, succulent and oblong to spatulate stems called cladodes. It has a water repellent and sun reflecting waxy epidermis and thorns for leaves. Cladodes that are 1–2 years old produce flowers, the fruit’s colours ranging from pale green to deep red.[4][6]

The plants flower in three distinct colors: white, yellow, and red. The flowers first appear in early May through the early summer in the Northern Hemisphere, and the fruits ripen from August through October.[citation needed] The fruits are typically eaten, minus the thick outer skin, after chilling in a refrigerator for a few hours. They have a taste similar to sweet watermelon. The bright red/purple or white/yellowish flesh contains many tiny hard seeds that are usually swallowed, but should be avoided by those who have problems digesting seeds. 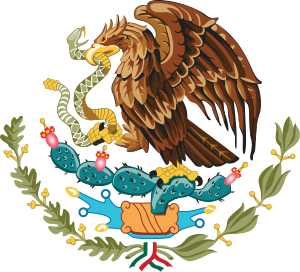 The coat of arms of Mexico depicts a Mexican golden eagle, perched upon an Opuntia cactus, holding a rattlesnake. 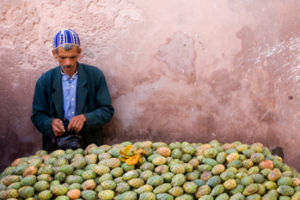 The fruits of Opuntia ficus-indica

Jams and jellies are produced from the fruit, which resemble strawberries and figs in color and flavor. Mexicans have used Opuntia for thousands of years to make an alcoholic drink called colonche.

In Sicily, a prickly pear-flavored liqueur called "Ficodi" is produced, flavored somewhat like a medicinal/aperitif. In Malta, a liqueur called bajtra (the Maltese name for prickly pear) is made from this fruit, which can be found growing wild in most every field. On the island of Saint Helena, the prickly pear also gives its name to locally distilled liqueur, Tungi Spirit.

Mexican and other southwestern residents eat the young cactus pads (nopales, plural, nopal, singular), usually picked before the spines harden. They are sliced into strips, skinned or unskinned, and fried with eggs and jalapeños, served as a breakfast treat. They have a texture and flavor like string beans.

They can be boiled, used raw blended with fruit juice, cooked on a frying pan, and often used as a side dish to go with chicken or added to tacos along with chopped onion and cilantro.

The cattle industry of the Southwest United States has begun to cultivate O. ficus-indica as a fresh source of feed for cattle.[7] The cactus is grown both as a feed source and a boundary fence. Cattle avoid the sharp spines of the cactus and do not stray from an area enclosed by it. The cactus pads are low in dry matter and crude protein, but useful as a supplement in drought conditions. In addition to the food value, the moisture content adequately eliminates watering the cattle and the human effort in achieving that chore.

Opuntia ficus-indica are planted in hedges to provide a cheap but effective erosion control in the Mediterranean basin. Under those hedges and adjacent areas soil physical properties, nitrogen and organic matter are considerably improved. Structural stability of the soil is enhanced, runoff and erosion are reduced, while water storage capacity and permeability is enhanced.[8] Prickly pear plantations also have an positive impact on plant growth of other species by improving severe environmental conditions which facilitate colonization and development of herbaceous species.[9]

Opuntia ficus-indica is being advantageously used in Tunisia and Algeria to slow and direct sand movement and enhance the restoration of vegetative cover, minimizing deterioration of built terraces with its deep and strong rooting system.[10]

Another use of the plant is as an ingredient in adobe to bind and waterproof roofs.[3]

O. ficus-indica (as well as other species in Opuntia and Nopalea) is cultivated in nopalries to serve as a host plant for cochineal insects, which produce desirable red and purple dyes, a practice dating to the pre-Columbian era.[11]

Mucilage from prickly pear may work as a natural, nontoxic dispersant for oil spills.[12]

The most commercially valuable use for Opuntia ficus-indica today is for the large, sweet fruits, called tunas. Areas with significant tuna-growing cultivation include Mexico, the Mediterranean Basin, Middle East and northern Africa.[13] The cactus grows wild and cultivated to heights of 12–16 ft (4–5 m). In Namibia, O. ficus-indica is a common drought-resistant fodder plant.[14]

Factors that limit the growth of prickly pear are rainfall, soil, atmospheric humidity and temperature.[15] The minimum rainfall requirement is 200mm per year as long as the soils are sandy and deep. The ideal growth conditions when it comes to rainfall are 200–400 mm per year.[8]

Opuntia ficus-indica is sensitive to lack of oxygen in the root zone, requiring well-drained soils.[8] Opuntia ficus-indica is similar to CAM species which are not salt-tolerant in their root zone where growth may cease under high salt concentration.[8] O. ficus-indica grows usually in regions where relative humidity is above 60% and saturation deficit occurs.[8] Optunia ficus-indica is absent in regions where there is less than 40% humidity for more than a month.[15] Mean daily temperature required to develop is at least 1.5-2 °C. At -10 to -12 °C, prickly pear growth is inhibited even if it is exposed to these temperatures only for a few minutes. The maximum temperature limit of prickly pear is above 50 °C.[8]

The plant is considered a pest species in parts of the Mediterranean Basin due to its ability to spread rapidly beyond the zones where it was originally cultivated.[citation needed]

As the fruits of Opuntia ficus-indica are delicate, they need to be carefully harvested by hand. The small spines on the fruits are removed by rubbing them on an abrasive surface or sweeping them through grass. Before consumption, they are peeled and sliced.[16]

The pads of the plant (mainly used as fodder) also need to be harvested by hand. The pads are cut with a knife, detaching the pad from the plant in the joint. If Opuntia ficus-indica is cultivated for forage production, spineless cultivars are preferred. However, also wild types of the plants are used as fodder. In these cases, the spines need to be removed from the pads to avoid damage to the animals. Mostly, this is achieved by burning the spines off the pads.[5]

One benefit of Opuntia ficus-indica for human and animal consumption is its water content in an arid environment, containing about 85% water as an important source for wildlife.[5] The seeds contain 3-10% of protein and 6-13% of fatty acids, mainly linoleic acid.[4][17] As the fruit contains vitamin C (containing 25–30 mg per 100g),[4][18] it was once used to mitigate scurvy.[19] There are high levels of selenium in Opuntia.[20]

The red color of the juice is due to betalains, (betanin and indicaxanthin).[21] The plant also contains flavonoids, such as quercetin, isorhamnetin[22] and kaempferol.[23]

DNA analysis indicated O. ficus-indica was domesticated from Opuntia species native to central Mexico.[3] The Codex Mendoza, and other early sources, show Opuntia cladodes, as well as cochineal dye (which needs cultivated Opuntia), in Aztec tribute rolls.[citation needed] The plant spread to many parts of the Americas in pre-Columbian times, and since Columbus, have spread to many parts of the world, especially the Mediterranean, where they have become naturalized.

In the early 1900s in the United States, the prickly pear fruit was imported from Mexico and Mediterranean countries to satisfy the growing population of immigrants arriving from Italy and Greece. The fruit lost its popularity during the mid-1950s, but has increased in popularity since the late 1990s, due to the influx of Mexican immigrants.[citation needed]

In Hebrew, the plant is referred to as sabra (Hebrew: צבר‎). This led to the popular use of the term Sabra to refer to an Israel-born Jew, alluding to the fruit and the people alike being tenacious and thorny ("rough and masculine") on the outside but sweet and soft (delicate and sensitive) on the inside.[citation needed] Kishkashta, a main character on a 1970-80s Israeli children's show, Ma Pit'om, was a large, talking felt puppet of the Opuntia cactus.